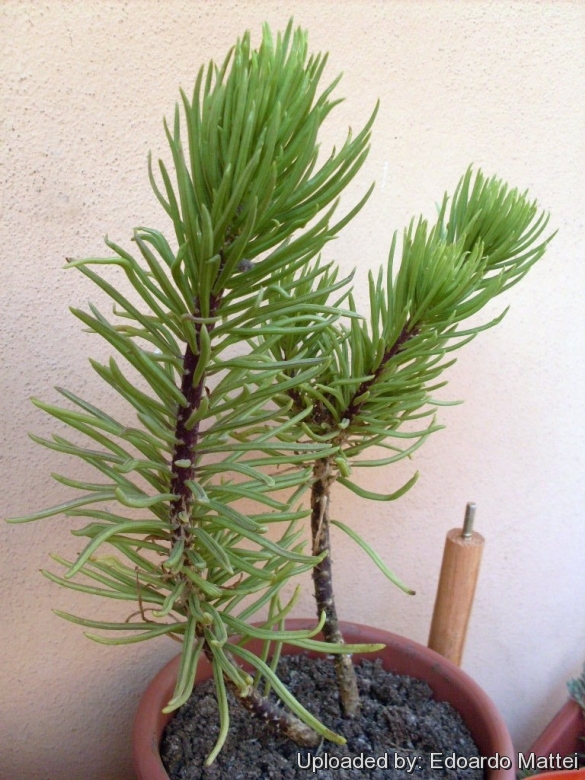 Origin and Habitat: Swaziland, Mozambique, to Eastern parts of Zimbabwe and South Africa in Gauteng, KwaZulu-Natal, Limpopo, Mpumalanga and North-West. It is probably naturalized in Kenia and is now also being cultivated elsewhere for its drought resistance.
Altitude range: 34 -1,700 metres above sea level.
Habitat: Senecio barbertonicus grows predominantly in grassland and among rocks in shade of low open canopy forest of west coast. The plant tends to scramble over rocks and other trees and bushes. The environment we have here has a hot and dry climate, with fairly good rains in Summer followed by prolonged drought, and temperatures near freezing in Winter. The flowers active to butterflies, the Painted Lady butterfly (Vanessa cardui) in particular.

Description: Senecio barbertonicus, named after one of its native localities Barberton, is a closely leafy succulent shrub that produces clusters of sweetly scented, golden yellow, tufted flower heads in winter and produce seeds with a dense tuft of bristles. But the most attractive features of this plant are its finger-like leaves pointing upwards along the branches. It is one of the least specialised and most common of the finger-leaved Senecios.
Habit: It is an evergreen, much-branched, scandent, vinelike shrub growing up to about 2 m high and spread, with a noticeably fleshy trunk that branches low down and then re-branches higher up to yield a relatively rounded canopy. All parts glabrous. In cultivation, under optimal growing conditions, it can grow much bigger than that, probably into a small tree over 3 m in height and spread.
Stems: Short fleshy, cylindrical light greyish-brown or light green, old stems nude, rough with leaf scars, branchlets closely leafy.
Leaves: Succulent, densely packed around the stem, light bright green to olive-green, cylindrical, finger-like 5-10 cm in length and 5-10 mm in diameter, slightly curved at the base to lie parallel to the stem and pointing upwards, apex acute, mucronate, base narrowed, sessile.
Flowers (capitula): Discoid, 10 mm wide and 76 mm long and fragrant , on short scaly peduncles in small corymbose clusters, these often in divaricate panicles, at the branch tips. Florets bright yellow. Involucre narrowly campanulate, Involucral bracts 8, narrow, ll-l3 mm long with 3-5 pale yellow resinous nerves, calyculus bracts very few, small. Flowers bright yellow, each corolla lobe with a median yellow resinous line running back down the tube.
Fruits (achenes): 3 ,5 mm long, cylindric, ribbed, hispid between the ribs.
Blooming season: Winter (In habitat July through September)

Cultivation and Propagation: Senecio barbertonicus grows as a shrub and yield a very ornamental green rounded canopy in full sun in warm climates.
Soil: It requires a very free draining enriched soil, mildly acidic to mildly alkaline but is very tolerant of poor soils.
Watering: It needs moderate water during from spring to autumn, keep rather dry in winter or the plants may rot at the base. But it adapts to different growing conditions from extreme heat and drought, to high moisture as it has a low rot potential.
Exposition: They seem to do well in part shade such as at the base of trees, but thrives also in hot sunny positions and will tolerate coastal conditions.
Frost Tolerance: It is cultivated in open air in the tropical and warm Mediterranean climate, with temperatures which it is good to keep over the 5°C, best 10-12°C, but can withstand light frost for short periods if very dry (hardy down to -4º C, even if with damage to the foliage) in these situations it will better resist if sheltered by the winter rains, seen that the humidity and low temperatures render it more sensitive to rottenness. Plants in containers however, suffered major leaf loss. USDA Zone 9b to 12.
Wind and salt tolerance: Tolerates well high wind and second line salt wind.
Maintenance: The flower stems need to be removed to keep a tidy appearance. These species do tend to get sort of leggy, which is particularly a problem if grown as a potted plant, and trimming back is often necessary.
Propagation: It is easy to propagate by cuttings in late spring to summer, just take a cutting of the plant let it dry for 1 or 2 weeks and stuff it in the ground (preferably dry, loose, extremely well draining soil).