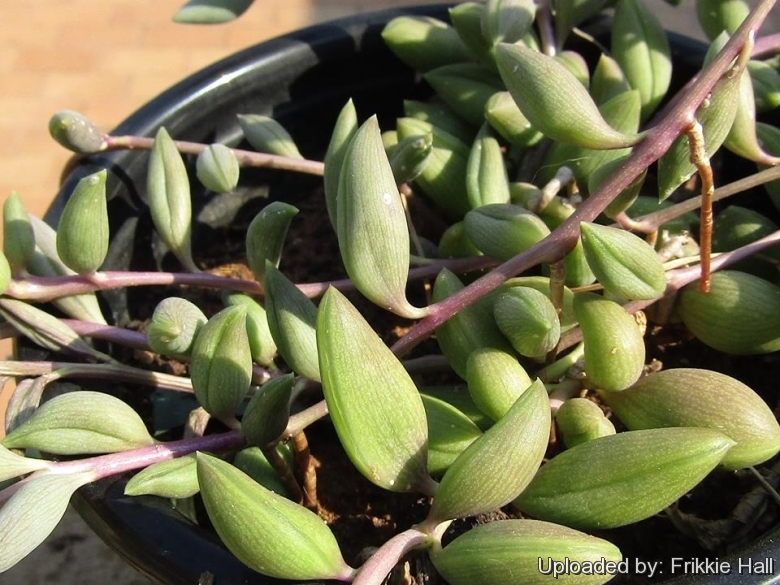 Description: Senecio herreianus, formerly widely known as Kleinia gomphophylla, is a popular hanging plant with oval pointed bead-like leaves on long, hanging sprout axils. It is similar to the more common Senecio rowleyanus, which has the same common names. The leaves are larger, less globular, more elongate (shaped like a spindle), and more glaucous. The stems are thicker, stiffer, and somewhat more erect. The evenly spaced leaves form a seemingly endless chain of beads as they creep along the soil. The white feather-duster flowers are very similar too. It is ften misspelled "herrerianus")
Habit: It is a dwarf, rhizomatous, evergreen, perennial, slightly branched,leaf-succulent It grows low- lying or creeping with partially upright shoots branching mainly below soil-level and will be pendant or scandent with time. Form large clusters over time, and if grown in a rockery will root down along the whole lengths of its stems.
Stems: Wiry, very long, 2- 4 mm in diameter, more or less buried , rooting regularly at nodes, glabrous, bluish grey and yellow.
Leaves: More or less erect at regular intervals along the stems, green-streaked dark green or purple, sub-sessile, sub-spherical up to 15 mm long, 7-8 mm in diameter, central mucro (axial) or somewhat misaligned, lined with c. 14-20 fine vertical, translucent dark-green or purple windows or "photosynthetic windows" running the length of each leaf. The shape of the leaves reduces the surface area that is exposed to the sun, allowing them to preserve moisture. The central core of each leaf is composed of clear water storage cells.
Inflorescences: Terminal, unbranched up to 8cm long.
Flowers (capitula): Phyllaries (involucral bracts) to 12. Disc flowers up to 20 tubulated white.
Fruits (achenes): Ribbed with a pappus to 13 -15 mm long.
Chromosome number: 2n = 60. 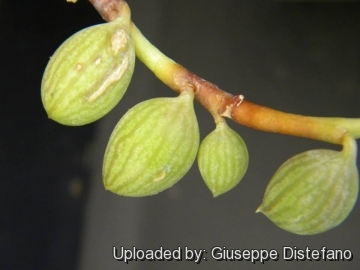 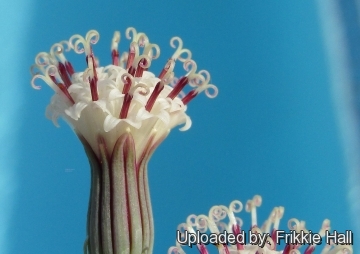 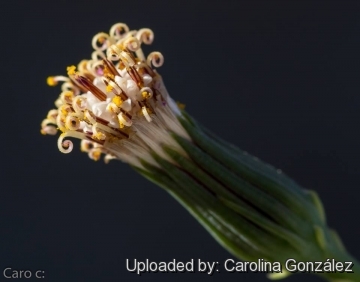 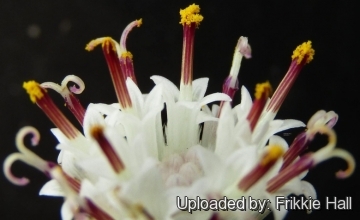 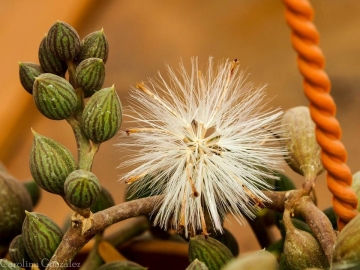 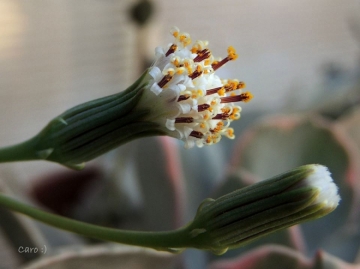 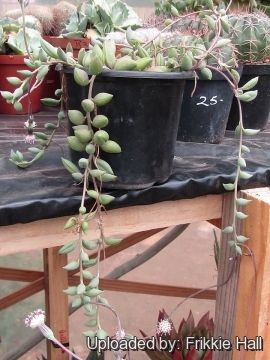 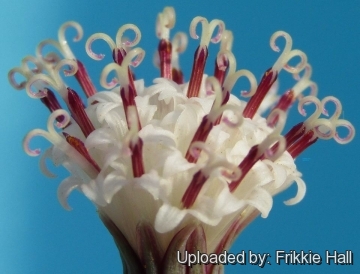 Cultivation and Propagation: Senecio herreianus is easy to grow, do well in succulent gardens or in a pot in a window sill and forms the striking trailing stems if grown in a suspended basket. It is a great plant for small apartments. In a warm Mediterranean climate, it can be grown as a ground cover as well, and if grown in a rockery will root down along the whole lengths of its stems. It is more drought-tolerant than Senecio rowleyanus, but it needs higher light and is far more prone to etiolation.
Growth rate: The plants grow profusely and can fill a 25 cm pot in just a year or two given the best conditions.
Soil: This plant does well in a cactus potting mix. Use pot with good drainage.
Transplantation: Repotting every 2-3 years. The trick is to be as careful as possible, as the string of pearls falls apart easily. Add some potting mix (compost) to the new container to bring the repotted plant to the correct height. Cautiously upturn the old container, supporting the plant with a gentle hand, position the root ball into the new container, add extra potting mix to fill any empty spaces, and carefully arrange the pearls to hang over the pot.
Watering: Water regularly during the growing season every weeks or so, making sure to drench and letting all the water drain out of the pot. If all the leaves fall off don't fret, stop watering and wait until it starts to grow again. Less water during winter months. In the rest period no high atmospheric humidity!! Care must be taken with watering as they tends to become swollen and untidy in growth habit if given too much water and shade.
Fertilization: Use a liquid plant food that is for cacti and succulents rich in potassium and phosphorous, but poor in nitrogen, because this chemical element doesn’t help the development of succulent plants, making them too soft and full of water.
Exposure: Grow it in slight dappled shade including two to three hours a day of direct sunlight through the year, which encourages flowering and heavy leaf production. Outside in the summer, it grows normally and the leaves attain a lovely blue-violet hue. So, recommended as a houseplant with the caveat that it needs a good deal of light if you want to see the normal leaf shape and any flowers. It do not do well in full shade as it tends to etiolate, and rots easily.
Hardiness: Reputedly sensitive to frost , but less so if kept on the dry side prior to, and during, cold weather (hardy to -5° C for short periods). However some warmth throughout the year will increase the grower's success (minimum 5° to 8°C during rest season). It does not like hot weather and needs cool air with ample airflow.
Pest & diseases: Just be sure to treat for aphids and mealy bugs if they appear. Rot it is only a minor problem with succulents if the plants are watered and “aired” correctly. If they are not, fungicides won't help all that much.
Warning: The fleshy leaves are poisonous and should not be consumed.
Propagation: Stem cuttings are easy to propagate, cut off strings near a node and stick them into fresh soil to restart. The cuttings should root in 2 to 6 weeks. It will form potato-like lumps under the soil.