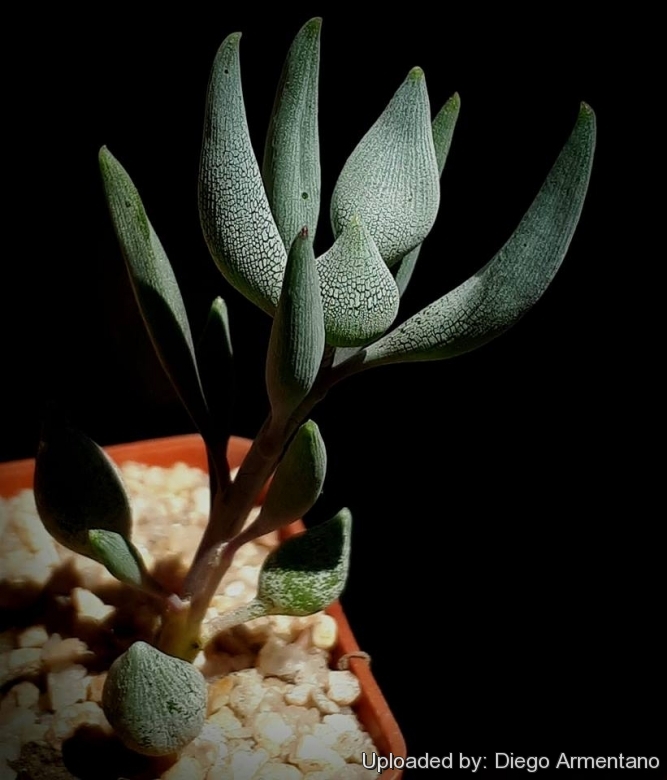 Description: Senecio citriformis (syn: Senecio pusillus Dinter ex Range) is a beautiful and unique scrambling succulent clothed with vertically-directed leaves spindle-shaped and small, somewhat resembling a lemon in outline. Leaves are covered in a grey-green waxy bloom, with transparent veins. It produces tiny clustering yellowish flowers in late summer to winter.
Habit: It is a dwarf, tufted, evergreen, perennial leaf-succulent that grows low- lying or creeping with partially upright shoots branching mainly below soil-level from a fleshy rootstock that may protrude from the soil. Form large clusters over time.
Shoots: erect and later procumbent. 5-10 cm long, 3-4 mm thick, brittle.
Leaves: Upright, tear-shaped, nearly spherical with a point at both ends, 1.5-2.5cm x 6-8 mm, soft green to deep green depending on the season and covered in a blue-grey waxy bloom, with 40 or more fine clear longitudinal stripes and in strong light may be semi-translucent.
Inflorescences (capitula): Heads small, yellowish-cream, without rays, creamy yellow, on thin wiry stalks. 10-15cm tall, with up to 2 forks.
Blooming season: Late summer to Winter. 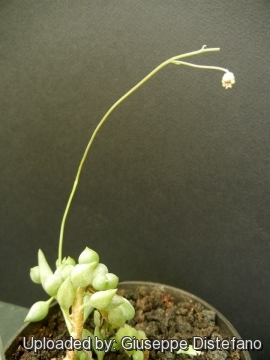 Cultivation and Propagation: Senecio citriformisis easy to grow, do well in succulent gardens or in a pot in a window sill and forms the striking trailing stems if grown in a suspended basket. In a warm Mediterranean climate, it can be grown as a ground cover as well.
Growth rate: The plants grow profusely and can fill a 25 cm pot in just a year or two given the best conditions.
Soil: This plant does well in a cactus potting mix. Use pot with good drainage.
Transplantation: Repotting every 2-3 years. The trick is to be as careful as possible, as the string of pearls falls apart easily. Add some potting mix (compost) to the new container to bring the repotted plant to the correct height. Cautiously upturn the old container, supporting the plant with a gentle hand, position the root ball into the new container, add extra potting mix to fill any empty spaces, and carefully arrange the pearls to hang over the pot.
Watering: Water regularly during the growing season every weeks or so, making sure to drench and letting all the water drain out of the pot. If all the leaves fall off don't fret, stop watering and wait until it starts to grow again. Less water during winter months. In the rest period no high atmospheric humidity!! Care must be taken with watering as they tends to become swollen and untidy in growth habit if given too much water and shade.
Fertilization: Use a liquid plant food that is for cacti and succulents rich in potassium and phosphorous, but poor in nitrogen, because this chemical element doesn’t help the development of succulent plants, making them too soft and full of water.
Exposure: Grow it in slight dappled shade including two to three hours a day of direct sunlight through the year, which encourages flowering and heavy leaf production. It should be protected from too much exposure in Summer. It do not do well in full shade as it tends to etiolate, and rots easily.
Hardiness: Reputedly sensitive to frost , but less so if kept on the dry side prior to, and during, cold weather (hardy to -5° C for short periods). However some warmth throughout the year will increase the grower's success (minimum 5° to 8°C during rest season). It does not like hot weather and needs cool air with ample airflow.
Pest & diseases: Just be sure to treat for aphids and mealy bugs if they appear. Rot it is only a minor problem with succulents if the plants are watered and “aired” correctly. If they are not, fungicides won't help all that much.
Warning: The fleshy leaves are poisonous and should not be consumed.
Propagation: Stem cuttings are easy to propagate, cut off strings near a node and stick them into fresh soil to restart. The cuttings should root in 2 to 6 weeks. It will form potato-like lumps under the soil.