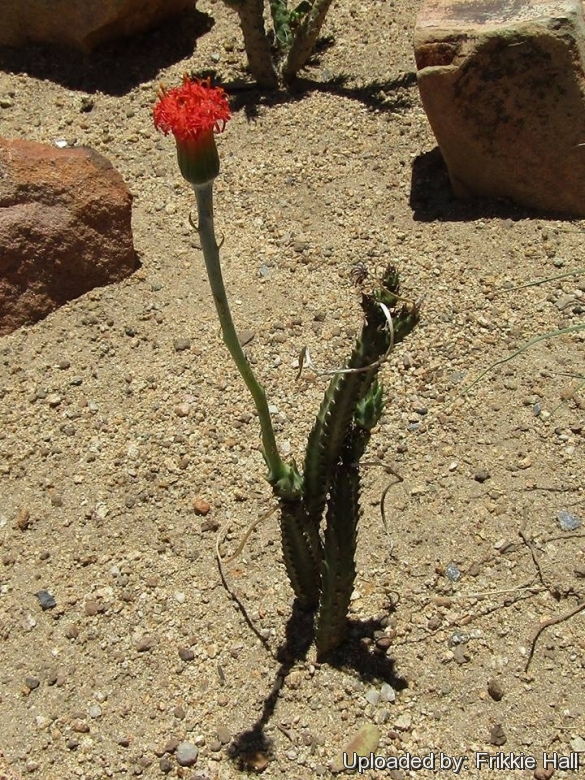 Description: Senecio stapeliiformis (Sometimes spelled Senecio stapeliaeformis or stapeliformis) is an attractive succulent species with prettily marked pencil-like stems with purple-green patterns and soft spines along the sides, the whole recalling a Stapelia in form (hence the name), but has a large orange hawkweed-like flower. Underground shoots emerge to form erect.
Habit: It is a perennial succulent, with erect to reclining stems branched from the base with rhizomes stems some of which travel underground before emerging.
Stems: Few, cylindrical, soft, brittle, glabrous and highly succulent, jointed, often 2-25 cm long, sometimes longer and about 7-20 mm thick, with 4-6 or rarely more angles or grooves with scale-leaves arranged along the ribs, dark green and often with an unusual pinkish tinge with silvery-green striations and purple arrowhead markings below each node.
Branches: Soft and brittle long, 7-20 mm in diameter with 4-6(-8) ris or grooves
Leaves: Hard-scale-like, 3-7 mm long, ephemeral, persistent as weak short spines.
Inflorescnces (capitula): Terminal, on simple stalks (2-) 7-15 cm tall; Capitula (heads) 1,8-4 cm across; Phyllaries (involucral bracts) 8-13; ray flowers none; disc flowers up to 50, red or orange; Corolla lobes spreading.
Blooming season: Autumn.
Fruits: Fruit are cylindrical achenes with a 15-28 mm long pappus (Feathery bristles structure that function as a "parachute" which enables the seed to be carried by the wind).
Chromosome number: 2n = 20.

Subspecies, varieties, forms and cultivars of plants belonging to the Senecio stapeliiformis group 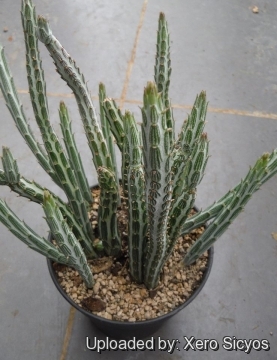 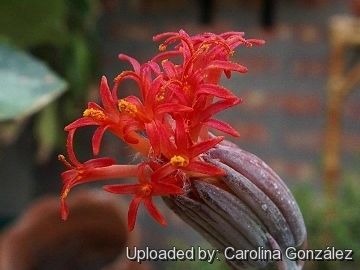 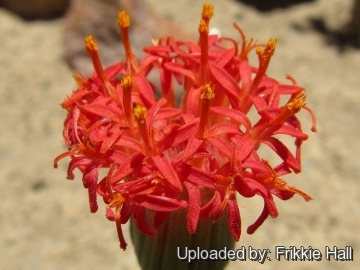 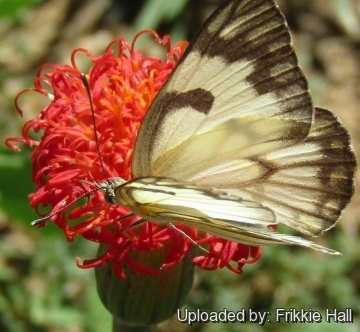 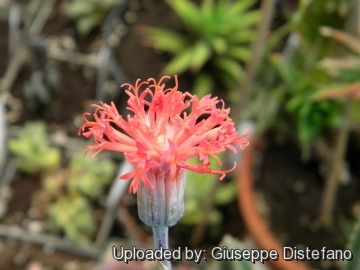 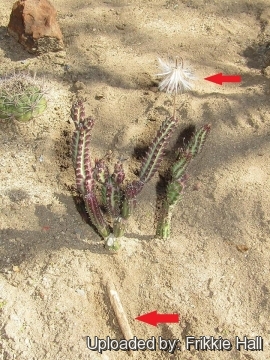 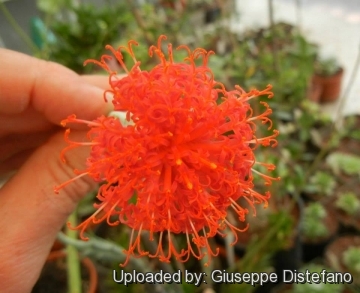 Cultivation and Propagation: Senecio stapeliiformis is a fast grower, good succulent ground cover in frost free zones and also a great container plant for full sun to partial shade. It is probably a winter grower and need water from October, when the new leaves can be seen forming on the growing tip In April the leaves begin to go yellow and drop off, so now it rests quite dry in to summer. But others suggest to water it moderately all year round as it tends to be an opportunistic plant that tend to grow in each time of the year whenever it has enough water in fair weather and rest when temperatures are too hot or too cool and may have several or sometimes no growth cycles in a year. It must be grown very hard in the nursery as close to the natural conditions as possible. This ensures that it keeps its compact habit. Due to it's cascading growth habit it is excellent in a hanging basket or tall pot.
Soil: Give the plant a well drained, airy, growing medium which mainly consists of non organic material such us clay, pumice, lava grit, and only a little peat or leaf-mould.
Irrigation: It prefers to be on the dry side with good but infrequent waterings but looks best with regular watering in hot months. Less water during winter. No water should ever be allowed to stand around the roots. These plants rot off very quickly if over watered.
Hardiness: Hardy to approx to -5 degrees Celsius, it is cultivated in open air in the tropical and warm Mediterranean climate, with temperatures which it is good to keep over the 5°C, best 10-12°C, but can withstand light frost for short periods if very dry, in these situations it will better resist if sheltered by the winter rains, seen that the humidity and low temperatures render it more sensitive to rottenness. Senecio stapeliiformis and its near neighbour Kleinia pendula should be kept very dry until all danger of frost is past. USDA Zone 9b to 12.
Exposure: Full sun to filtered light.
Maintenance: The flower stems need to be removed to keep a tidy appearance. This species do tend to get sort of leggy, which is particularly a problem if grown as a potted plant, and yearly pruning is often necessary to shape. From time to time it is better to cut out some of the older growth to make room for the new. Like quite small pots, repot in very later winter, early spring.
Propagation: It is easy to propagate by cuttings in late spring to summer, just take a cutting of the plant let it dry for 1 or 2 weeks and stuff it in the ground (preferably dry, loose, extremely well draining soil).