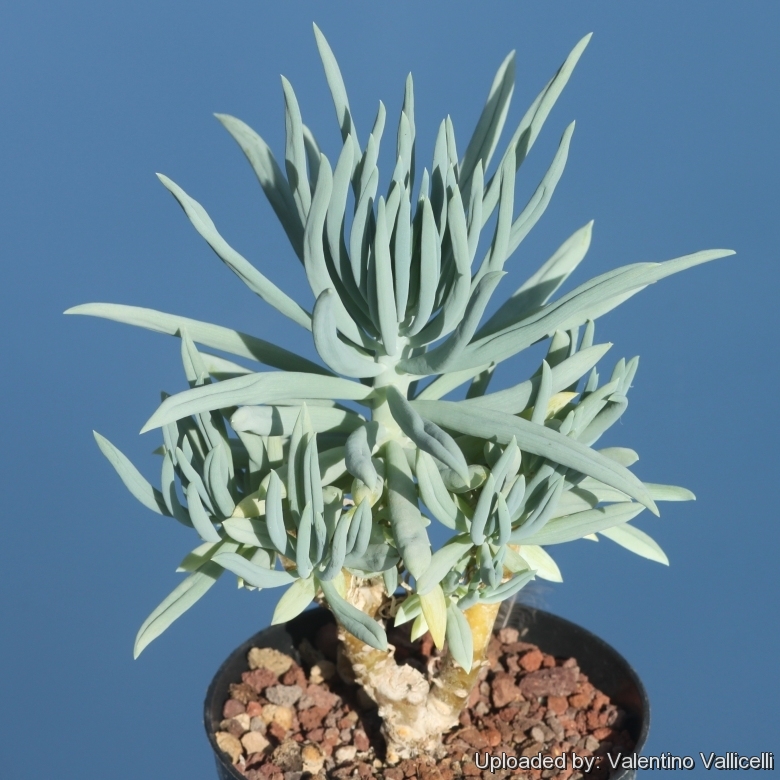 Description: Senecio talinoides is an evergreen perennial semi-trailing succulent shrub up to 40 cm tall and 60 (or more) cm wide with leaves angled upward from the ground. This species forms a variable complex creating problems for identification of the several subspecies and forms, most with a marked juvenile phase characterized by short branches and short leaves more similar to those of Senecio citriformis. For the present 5 subspecies are recognized, the nominate, subsp. aizoides, subsp. chordifolius, subsp. cylindricus and subsp. mandraliscae. The subsp. talinoides is similar to Senecio talinoides subsp. mandraliscae but with finer texture.
Stem: Sparingly branched, erect becoming procumbent and often rooting at the nodes, fleshy and brittle, 5-10 mm in diameter, usually short but much more long in cultivation.
Leaves: In tufts at the stem tips, long fusiform to terete, 6-15 cm long, 4-11 mm in diameter slightly flattened above, erect or arching, glaucous-grey with darker stripes, but can rub off the pruine and it's a blue-green beneath.
Inflorescence: Corymbose 10-40 cm long, the subsp. talinoides has the largest and most branched inflorescence with up to 100 small ray-less capitula (flower heads) held above the foliage. The outside of the capitulum is blue-green, and the small flowers within are white or off-white and not showy. They are followed by long thin wind-dispersed seeds.
Chromosome number: 2n = 20, 30, 40, 100. 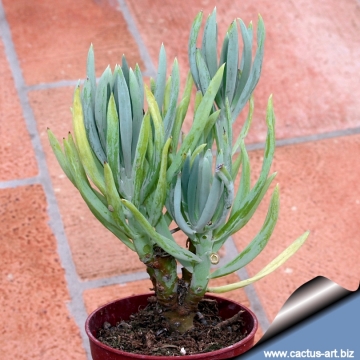 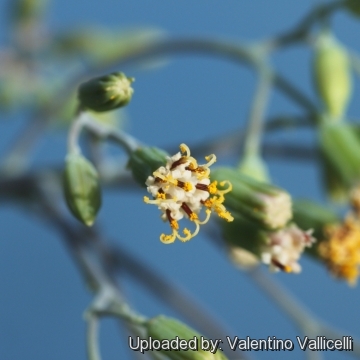 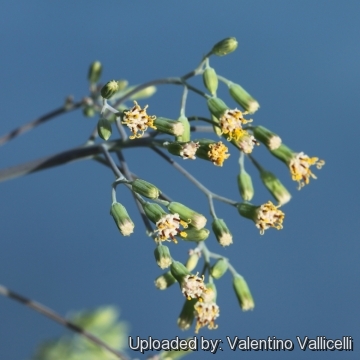 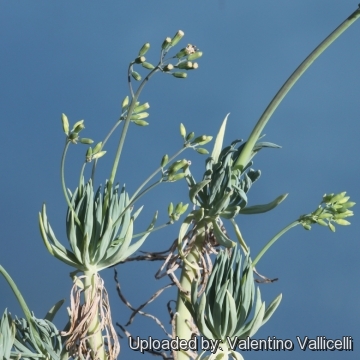 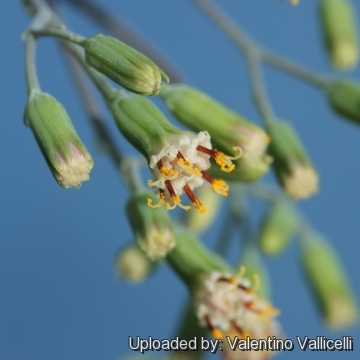 Senecio talinoides Photo by: Valentino Vallicelli
Send a photo of this plant.

Cultivation and Propagation: This plant grows as a groundcover and makes a very ornamental pale blue colouring in full sun in warm climates. It's fresh new winter growth provides extraordinary form and colour contrast in the landscape when placed either with other succulents (e.g. yellow Sedum) or in a mixed planting.
Soil: It requires a very free draining enriched soil, mildly acidic to mildly alkaline but is very tolerant of poor soils.
Watering: It needs moderate water during from spring to autumn, keep rather dry in winter or the plants may rot at the base. But it adapts to different growing conditions from extreme heat and drought, to high moisture as it has a low rot potential.
Exposition: They seem to do well in part shade such as at the base of trees, but thrives also in hot sunny positions and will tolerate coastal conditions.
Frost Tolerance: It is cultivated in open air in the tropical and warm Mediterranean climate, with temperatures which it is good to keep over the 5°C, best 10-12°C, but can withstand light frost for short periods if very dry (hardy down to -2 to -10º C, even if with damage to the foliage) in these situations it will better resist if sheltered by the winter rains, seen that the humidity and low temperatures render it more sensitive to rottenness. Plants in containers however, suffered major leaf loss. USDA Zone 9b to 12.
Wind and salt tolerance: Tolerates well high wind and second line salt wind.
Maintenance: The flower stems need to be removed to keep a tidy appearance. These species do tend to get sort of leggy, which is particularly a problem if grown as a potted plant, and yearly trimming back is often necessary.
Propagation: It is easy to propagate by cuttings in late spring to summer, just take a cutting of the plant let it dry for 1 or 2 weeks and stuff it in the ground (preferably dry, loose, extremely well draining soil).