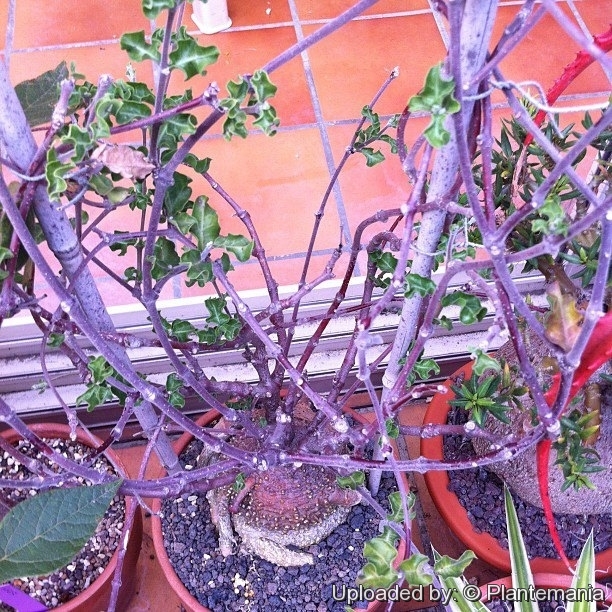 Origin and Habitat: Fockea capensis is a is found only in the southern portion of South Africa
where it grows on the Little Karoo (Western Cape).
Habitat and ecology: This species is found among other succulents on rocky
slopes in the dry mountains forming the karoo northern border. Its tubers can be tightly wedged among the rocks. It’s grey green, elliptic, finely pubescent leaves can also be found jetting out of rocky slopes.

Description: Fockea capensis is a caudiciform succulent with an enlarged, water-storing, root called a caudex belonging to the Milkweed family (Asclepiadaceae). Its foliage is thin, creeping or vining, with opposing, elliptical-oval leaves with strongly crisped margins. Its flowers are small and insignificant, with greenish, twisted, star-shaped, flattened lobes. A single specimen of this curious and rare plant was sent to Europe in the Schonbrunn Palace Gardens some time before 1800. Then it was thought to be the unique survivor of some prehistoric form, but others like it are now known in the dry parts of West Griqualand, near Prince Albert. F. capensis is one of oldest succulent in captivity of considerable interest on account of its great rarity and its apparent great longevity. The leaves on F. capensis are usually very wavy, leading to the commonly used improper name of Fockea crispa. This plant is now common in the trade.
Rootstock (caudex): Very large.
Stems: 30-60 cm long, tortuous or twining, puberulous or very shortly and softly pubescent.
Leaves: Very shortly petiolate, deflexed, 8-21 mm long, 8-12 broad, elliptic-oblong, obtuse, apiculate, rounded at the base, slightly folded lengthwise, strongly undulate, grey green, finely pubescent on both sides.
**Flowers:** 3–5 together fairly inconspicuous, lateral at the nodes. Pedicels 2-4 mm long, minutely tomentose, as are the 1.5-2mm long lanceolate acute sepals; corolla puberulous outside and on the inner face. Tube about 2.5-4 mm long, campanulate. Lobes very spreading, 7-8 mm long, linear-lanceolate, more or less twisted, truncate at the apex, with revolute margins, green. Corona arising near the base of the corolla-tube, white, about 4 long, the lower half tubular and about as long as the corolla-tube, divided above into 5 trifid segments alternating with 5 small recurving entire or bifid teeth, middle tooth of the trifid segments filiform, as long as the tube and 3–4 times as long as the lateral teeth, which are decurrent within the tube as 5 pairs of wing-like keels, between which, at the middle of the tube, arise 5 other filiform teeth in one series opposite the middle teeth and reaching to the level of the lateral teeth of the trifid segments; anther-appendages as long as or slightly exceeding the coronal tube.

Cultivation and Propagation: Fockea capensis is of easy cultivation and hardy. Although it shows decreased activity in the summer period, it never goes into complete dormancy and always carries some leaves. Conversely it can be deciduous in summer if kept dry. It is a particular favourite of caudiciform plant enthusiasts.
Growth rate: Plants grow slowly and caudex take many years to enlarge.
Watering: The plant will take regular water and fertilizer in all year round. However, that species seems to hate being wet for any extended period and rot easily especially in winter if overwatered. In winter keep on the dry side and water only enough to keep the tuber from shrivelling.
Soil: It grows well in most soils, and only requires very fast drainage.
Frost tolerance: Due to its African origin it cannot tolerate freezing temperature but should be able to handle 7 degrees Celsius very easily. Plants grown outdoors may endure relatively wet, cold rainy winters. It prefers sun or light shade, but the tuber should stay constantly in the shade.
Disease and pests: The fockeas are pest free outdoors, but may attract whiteflies if kept in humid greenhouse environments, and some kind of control might be needed. The plant are also attractive to mealy bugs and the aphid occasionally feeds on young stems.
Rot: Rot it is only a minor problem with Fockea if the plants are watered and “aired” correctly. If they are not, fungicides won't help all that much. It is very unlikely to lose this plant from root rot from excessive water. Reliable as a permanent collector's plant.
Propagation and planting: This species is propagated through seeds and stem cuttings.