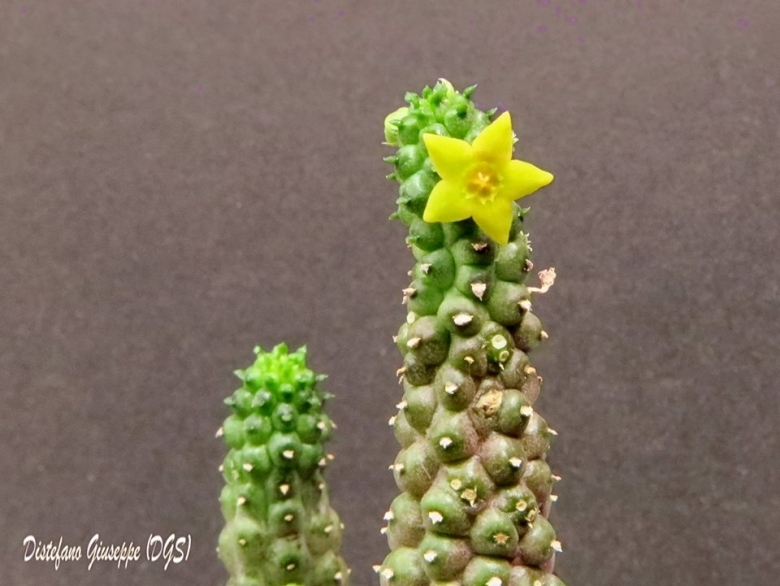 Origin and Habitat: Dhofar, Oman.
Type Locality: Oman, Dhofar Province, on road from Thamarit to Salalah.
Habitat and ecology: Echidnopsis scutellata ssp dhofarensis grows only on the north rocky slopes of the Jebel Qara in Oman, north of the town of Salalah. This area is rich in stapeliads, particularly Caralluma acutangula. Much rarer species are Pachycymbium luntii, Caralluma foulcheri-delboscii, Pseudolithos mccoyi, Orbea luntii and Rhytidocaulon fulleri, all growing within Euphorbia balsamifera subsp. adenensis and Jatropha dhofarica bushes which capture the monsoon mists.

Description: Echidnopsis scutellata ssp dhofarensis, is a reclining to erect plant, with little branching, is easily broken, and is rooted on the underside. Its shoots are round, about 10 cm long, and green or reddish with the same geometric tubercled ribs as many other Echidnopsis. The flowers are pale yellow, 9-10 mm in diameter diameter.
Derivation of specific name: The epithet 'dhofarensis', refers to the place of origin, the Dhofar Province, Oman, with the Latin termination 'ensis', place of origin.
Stems: 8-angled. The podaria (tubercles) are fine, hexagonal to conical, not papillose, and bearing the scar of the tiny, deciduous leaf blade in the upper segment.
Leaves: Rudimentary, thick, as long as broad or less than two times longer than broad at base, glabrous, not papillose, falling early.
Flowers: Inside pale yellow, 9-10 (or more) mm in diameter, tube short, cup-shaped. Tube walls addpressed to staminal column and just containing it. Corolla-lobes deltoid-ovate, tip and margins revolute, margins not hairy. Corolla flat when fully open. Corona yellow or red.
Taxonomy notes: Echidnopsis scutellata ssp dhofarensis, it is distinguished from subsp. scutellata by the flatter flower lacking the bowl-shaped, broad tube whose sides are some distance away from the staminal column. The staminal column is also less broad and lacks the dentate margin of subsp. scutellata. The flowers are larger than those of subsp. australis where the leaves are also finely papillose, a feature lacking in subsp. dhofarensis. It is easily separated from subsp. planiflora by the different stems, though florally it is similar, particularly to plants previously knovni as Echidnopsis chrysantha. Forms with red and with yellow coronas are sometimes found growing together, but there seems to be little variation in the pale yellow colour of the corolla.

Subspecies, varieties, forms and cultivars of plants belonging to the Echidnopsis scutellata group 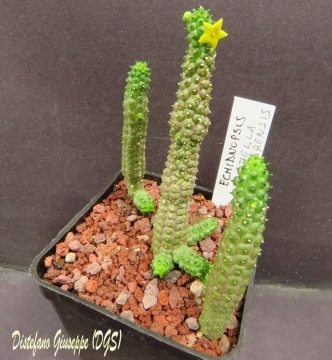 Cultivation and Propagation: Echidnopsis scutellata subs. dhofarensis is an easy obliging blooming plant, which is happy in any average succulent house. This plant is easy to grow and flower, and one which will tolerate most soils and growing conditions, but like ssp. scutellata benefiting in cultivation from extra warmth in winter.
Soil: Since roots are quite shallow, use a cactus mix or add extra perlite or pumice to regular soil potting soil. A gritty, very free-draining compost is suitable, and clay pots help the plants to dry out between watering.
Watering: They require moderately watering through the growing season but enjoy plenty of water and some fertiliser in hot weather, this helps them to flower freely. Water more sparingly in winter according to temperatures. But, as with most asclepiads, it is unwise to leave them wet in cold weather.
Hardiness: Winter care presents no problems at 5°C with plenty of light.
Sun Exposure: Partial sun or light shade.
Pest and diseases: They are generally fairly easy to grow, especially if kept pest-free. They are susceptible to stem and root mealy bugs, and damage from these may well initiate fungal attack. If you do have problems with a stem or with basal rotting, you can reliably isolate the healthy parts, dry them off, and re-root them in moist compost.
Cultural Practices: Re-pot every 2 years.
Propagation: Easiest with stem cuttings. Allow cuttings to dry a day before planting. Stems must be laid (Not buried) on gritty compost and will then root from the underside of the stems. It can also be increased from seeds sowing in spring in moist, sandy peat moss. Barely cover seeds.