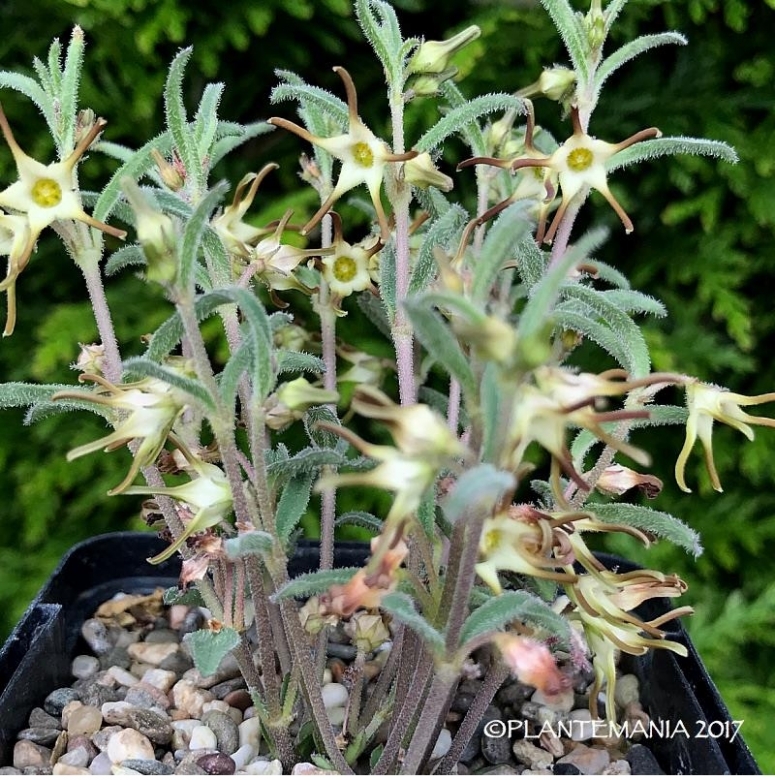 Origin and Habitat: Western Cape (Caledon to Riversdale), and KwaZulu-Natal South Africa.
Altitude range: Brachystelma praelongum ssp. thunbergii is found mainly at 1800-2500 metres above sea level.
Habitat and Ecology: This is the typical Brachystelma of the sandstone highest foothills of the Drakensberg. It has been recorded from the foothills of the Drakensberg in the Underberg district, on clay flat and lower slopes in the Riversdale commonage, on sandstone pavement areas and associated short grassland throughout the foothills of High Berg from north to south and in Qua Qua. Qua Qua is a densely populated, badly eroded region in the extreme northern section of the Drakensberg and this species occurs mainly in short grassland on sandstone pavements and cave sandstone formations. It grows in similar situations to Brachystelma perditum and Brachystelma praelongum and is mainly associated with very gently east sloping mountain summits. The habitat is regularly burnt in the winter months and grazed when the new grass emerges in spring and summer. Where this is excessive quite a lot of tubers get exposed and trampled.

Description: Brachystelma praelongum ssp. thunbergii, formerly known as Brachystelma thunbergii, is a dwarf perennial herb with a few aerial shoots 5-10 cm high, from a small flattish tuber (caudex) the top of which may sometimes be seen above ground. The leaves are oval to linear, with sinuate margins. The flowers are single on short stalk or few in a cluster and small. The corolla is campanulate white with yellowhish-green lobes with long, linear tips, the corona brilliant yellow. The subspecies thunbergii differs from ssp. praelongum for its leaves that are linear to elliptic, to 40 mm long and 12 mm wide. Pedicels only 2-8 mm long; flowers slightly larger and corona shorter, glabrous. The flower usually has a strong carrion smell, but the specimens from Jobskop have a sweet honey scent, most unusual in the genus.
Derivation of specific name: This species was named after the Swedish botanist and physician at Uppsala Dr. Carl Peter Thunberg. Carl P. Thunberg (1743–1828), who collected plants at the Cape in 1772– 1774.
Tuber (caudex): Round or oval flattened, mostly underground up to about 40 mm diameter, and slightly compressed from above and below, often with slightly bowl-shaped central area, often with slightly bowl-shaped central area.
Stems: Aerial shoots few, pinkish brown up to about 5-10 cm high, or taller under cultivation, branching at the base, pubescent or puberulous; sap clear.
Leaves: Blade 8-40 mm long, (1-)4-12 mm broad, linear, lanceolate or elliptic, acute or obtuse, cuneate at the base, flat or undulated, ciliolate and thinly pubescent to nearly glabrous on both sides with minute spreading hairs, which are most abundant on the midrib beneath. Petiole 1.5-3 mm long. Margins slightly sinuate.
Flowers: In fascicles of 2–8 or solitary at the nodes. Pedicels 2-8 mm long, puberulous. Sepals 2-3.5 mm long, 1-5 mm broad, linear-lanceolate, acuminate, thinly puberulous or pubescent. Corolla-tube 2.5-4 mm long, 2.5-4.5 mm in diameter at the mouth, campanulate, with a minute projecting tubercle or point at each sinus, glabrous outside, thinly pubescent on the upper part within, white. Corolla lobes free, 4-6 mm long, linear from the ovate-deltoid 2-2.5 mm-broad base, replicate, erect or very slightly spreading, straight, hooked at the apex, thinly pubescent at the very base within, otherwise glabrous and not ciliate, greenish-white at the base, passing upwards to brownish, cream or tawny yellow, drying olive-brown or blackish-brown. Outer corona cup-like, much shorter than the staminal column, 10-toothed; teeth 0.25 mm long, deltoid, acute, erect, straight, glabrous, white to brilliant yellow. Inner corona-lobes 0.5 mm long, linear, obtuse, closely incumbent on the backs of the anthers and shorter than or not exceeding them, dorsally connected with the outer corona, glabrous, apparently white. Staminal column 0.75-1 mm long.
Blooming season: The plants flower sporadically in late spring to summer (September to November) with a peak in early to midsummer, particularly in November.
Fruits (follicles): One or two follicles per flower, 2, up to 70 mm long, 5 mm in diameter.

Subspecies, varieties, forms and cultivars of plants belonging to the Brachystelma praelongum group

Although the 2 subspecies have a disjunct distribution, overlapping forms seem to exist and the division into 2 taxa is perhaps artificial. 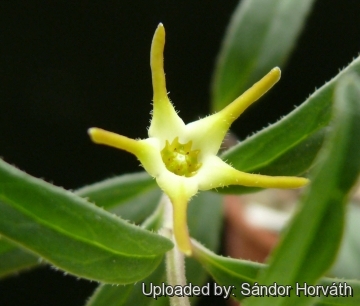 Cultivation and Propagation: Brachystelma praelongum ssp. thunbergii is relatively hardy in cultivation.
Soil: It grows best in deep earthenware pots in a very draining but rich soil.
Exposure: In cultivation the plants are usually grown in semi shade, with the tubers wholly or (preferably) partially exposed to prevent scorching and rotting of the roots. When the plants are kept in half a day's sunlight their natural compact habit is maintained, a characteristic feature of most plants in habitat
Hardiness: It should be overwintered in the greenhouse at temperatures over 12°C (avoid letting temperatures drop lower than 5° C).
Water requirements: This plant can take a good deal of water during active growth and should be watered only when not dormant. Keep dryish in winter. An error in cultivation may produce unsightly holes in the tuber.
Reproduction: This species can be reproduced by seeds.