Origin and Habitat: Orbea deflersiana is widely distributed in the southwestern corner of the Arabian Peninsula, from the southernmost part of Saudi Arabia to the southern parts of Yemen, where it is widespread and quite frequent.
Habitat and ecology: Plants are usually found in rocky areas the shade of Acacia trees and other succulents from the plains at the foot of the escarpment into the foothills of granitic mountain lying close to the Yemen border and rising about 1.670 metres. This mountain attracts mist, cloud and rain. 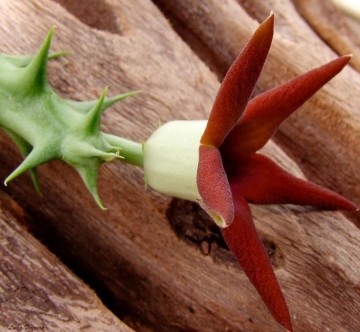 Cultivation and Propagation: Orbea deflersiana grow well in light gritty soil with a very liberal drainage. They should at all times sparingly watered (best rain water with some occasional fertiliser), and in winter time they hardly require any. They require outdoor culture, or a warm close greenhouse, while growing in the early part of summer, and afterwards may be ripened and kept in a greenhouse; but as they bloom chieﬂy in autumn, warmth is desirable to enable them to expand their ﬂowers.
Hardiness: Bearing in mind its habitat this species benefits from slightly warmer winter temperature of 10-12 °C, providing that plants are kept absolutely dry.
Exposure: They prefer light shade rather than full sun, although stems may not colour up under shady conditions.
Propagation: Plants are usually increased by cuttings, which, as they are very succulent, should be allowed to dry a week after they are taken off, when they may at once be put singly into pots.
Pest & diseases: Keep their roots free of mealy bugs, as fungal attack often occurs as a result of damage to stems by insects. A layer of grit on the surface of the compost prevents moisture from accumulating around the base of the stems and minimise the chance of fungal attack on the roots.