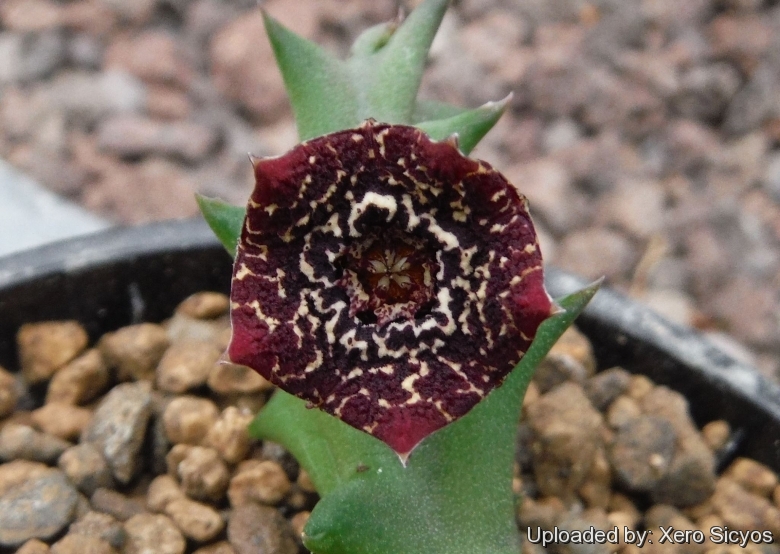 Origin and Habitat: Orbea carnosa subsp. keithii is wide-spread in Zimbabwe (from Harare eastwards to Mutare and southwards to the vicinity of Beit Bridge ), Republic of South Africa (Northern Province and Mpumalanga ex Transvaal). It has also been recorded in parts of Mozambique adjacent to the Ubombo Mountains of Swaziland and in the eastern corner of Botswana east of Selebe Phikwe.
Altitude range: 300 - 1200 metres above sea level.
Habitat and ecology: Generally subsp. keithii seems to grow on stony ground, usually in flat areas but sometimes on slopes or even the summits of hills in soils derived from sandstones, igneous rocks, or calcrete. Plants may be found in the open among stones or or hidden among dead leaves in the shelter of small shrubs and grass tufts or alongside Colophospermum mopane or acacia trees.

Description: Orbea carnosa subsp. keithii is a leafless perennial stem succulent that spreads by stolons. The stolons branch off from the existing decumbent stem bases to form additional erect or ascending stems. Small fleshy flowers in groups of 1-3 are produced in spring and summer. The corolla has a five lobes marked with small teeth at the angles and halfway along the corolla sides. The corolla surface is rich maroon, dotted or striped in yellow sometimes much more creamy yellow towards the central annulus surrounding the corona, with a few clavate hairs near the base of the lobes. The species is extremely variable.
Stems. Bluish-green to greyish-green, often covered in purple blotches, 70-90 mm high, much thicker than the slender under-ground rhizomes, deeply 4-angled with prominent fleshy teeth arrayed in vertical columns along the stems.
Teeth, alternate, fleshy and triangular which are laterally compressed with prominent denticles (toothlets) on the sides.
Flowers: Small, fleshy, in groups of 1-3. Pedicel 2-6 (-12) mm long, 1.5-2.0 mm in diameter. Sepals 3-5 mm long, 1.5 mm wide, at base. Corolla bell-shaped, five-lobed, about 12 mm in diameter with a prominent annulus surrounding the mouth of the tube, the inner surface is rugose, uniformly yellow or maroon to pale brown or maroon with irregular reticulated, dotted or striped creamy-yellow markings, sometimes much more creamy yellow towards the central annulus surrounding the corona. Tube minutely verrucose. Lobes 3-5 mm long, 6-8 mm wide at base margins marked with small teeth at the angles and with a few small rigid clavate hairs near the base of the lobes. Additional teeth can be seen on flower margin, halfway along some of the lobes. These additions are sometimes absent, the sides even being indented to sunken midpoints. Corona 3-4 mm tall, 4 mm in diameter. Outer corona cup-like, deeply bifid, higher than the stamina.
Blooming season: Flowers are produced in spring and summer.
Distinguishing characteristics. The main differences listed between subsp. carnosa and subsp. keithii are: corolla 6-10 mm in diameter in subsp. carnosa, 10-20 mm in subsp. keithii; corolla always deep maroon with or without markings in subsp. keithii, and pollinia broader in subsp. keithii. Yet, subsp. keithii has been found with pale brown and even yellow flowers ("Pachycymbium lancasteri"), and occasionally brownish flowers occur in subsp. carnosa; thus, flower colour is not a distinguishing character. Although the flowers of subsp. carnosa are often smaller than in subsp. keithii, there is no discontinuity in the size of the flowers, and the two taxa are therefore separated mainly by their pollinaria.

Subspecies, varieties, forms and cultivars of plants belonging to the Orbea carnosa group 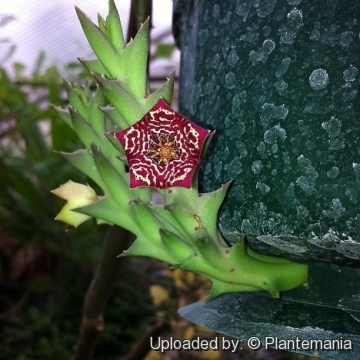 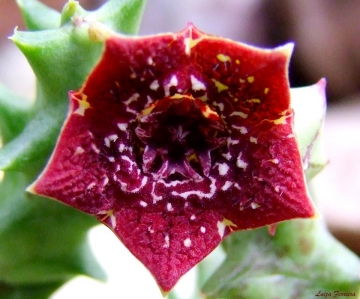 Cultivation and Propagation: Orbea paradoxa is an easily grown stapeliad, suited to hanging baskets as well as pots. It grow well in light gritty soil with a very liberal drainage. They should at all times sparingly watered (best rain water with some occasional fertiliser), and in winter time they hardly require any. They require outdoor culture, or a warm close greenhouse, while growing in the early part of summer, and afterwards may be ripened and kept in a greenhouse; but as they bloom chiefly in autumn, warmth is desirable to enable them to expand their flowers. They are also most attractive in a hanging pot with their trailing segments With numerous fleshy (non-hurtful) teeth. Some collectors enjoy the long, snake-like stems induced by an excess of water.
Spring: When winter ends and they begin to grow again, they will require much water and soaking the pots will no longer put the plants at risk for rot. In the spring they will grow well in partial shade and leaving them out in the rain may provide them with the water they need.
Summer: In the summer months they will tolerate heavy rain, but will be just as happy if the season is dry. It's best to sort out the stems while the plants are resting in the summer before they begin their autumnal growth cycle. They will tolerate very hot weather outdoors as long as they are kept in filtered light and this will encourage them to flower in the Autumn. They also enjoy some fertiliser. Moving the plants as they are developing buds may cause them to spontaneously abort the flowers all together.
Autumn: In the fall keep them outdoors until the night time temperatures drop below the 5°C.
Winter: Winter care presents no problems at 5°-10° C with plenty of light. As soon as they are flowered be sure to take extra precautions to keep them dry, because damp cool conditions when the plants are resting is an invitation to fungal infections, but - according to temperatures –some occasional lit watering may be useful.
Potting medium: Since roots are quite shallow, use a cactus mix or add extra perlite or pumice to regular soil potting soil. A gritty, very free-draining compost is suitable, and clay pots help the plants to dry out between watering. Re-pot every 2 years.
Pest and diseases: Orbea are generally fairly easy to grow, especially if kept pest-free. They are very susceptible to stem and root mealy bugs, and damage from these may well initiate fungal attack. Any time when there is a dead or dying stem in the pot it is important to remove it immediately and completely before other healthy stems can become ill too, isolate the healthy parts, dry them off, and re-root them in new compost.
Traditional uses: Orbea carnosa subsp. keithii is wholly edible, either raw or roasted, but the underground portions are better than those above ground, which tend to be bitter. They have a pleasant smoky taste and their abundant juice makes them a useful source of water. This his is a staple foodstuff of Bushmen. The fleshy stems are eaten either raw or roasted. Kade Bushmen also regard the fleshy stems of this plant as a supplementary food.
Propagation: Easiest with stem cuttings. Allow cuttings to dry a day before planting. Stems must be laid (Not buried) on gritty compost and will then root from the underside of the stems. It can also be increased from seeds sowing in spring in moist, sandy peat moss. Barely cover seeds. Seeds germinate quickly. In any season it's best to lay the stems out for several days before replanting them and then pot them only in dry soil and withhold any water until they begin to shrivel or start growing again.