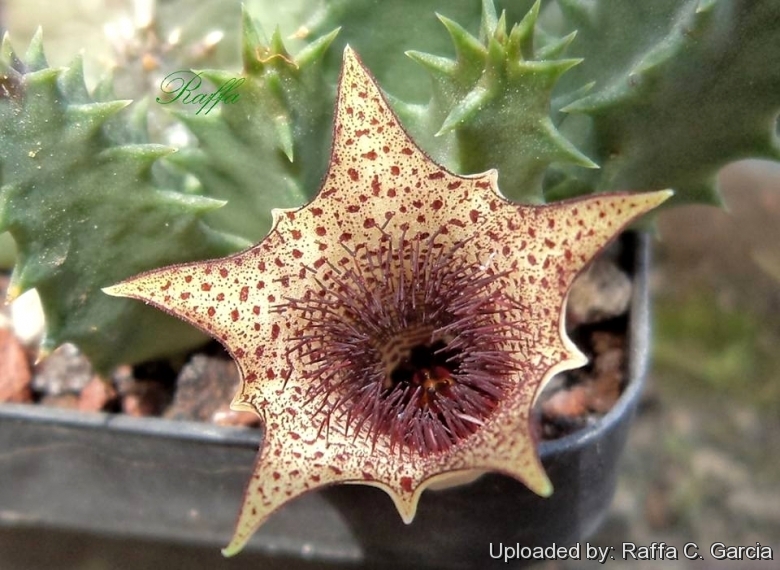 Huernia barbata Photo by: Raffa C. Garcia
This species is quite variable, especially the ground colour of the corolla and covering of dark purple-brown warts and small blood-red spots varies considerably from plant to plant; moreover the stiff clavate purple hairs in the tube are very variable in size and length.

Origin and Habitat: Huernia barbata is a species in the genus Huernia belonging to the family of the Asclepiadaceae native to South Africa (Eastern Cape, Western Cape, Northern Cape, Free State) and Lesotho.

Description: Huernia barbata is a leafless succulent forming dense clumps to 60 cm. Flowers creamy, urn-shaped, with triangular, acuminate, spreading lobes, the tube entirely or irregularly and concentrically marked with delicate maroon speckling, with long stiff, purple, often clavate (club shaped), hairs in mouth of tube and onto petals. The dense hairs of the corolla tube, which give the plant its name, make the flowers especially charming and exclude any confusion with any other species. This species is quite variable, especially the ground colour of the corolla and covering of dark purple-brown warts and small blood-red spots varies considerably from plant to plant; moreover the stiff clavate purple hairs in the tube are very variable in size and length. Huernia barbata was already described and the name validly published by Francis Masson. It was Adrian Hardy Haworth, however, who reclassified it into todays valid botanical systematics in 1812.
Derivation of specific name: barbatus (Latin) - bearded.
Stems: Erect, richly branched at the base, up to 6 (or more under cultivation) cm long, 12-20 mm thick, acutely 4–5-angled, glabrous, grey-green or glaucous-green. Angles with spreading deltoid pointed teeth c. 3 mm long.
Flowers: In groups of 2 (or more), successively developed near the base of the young stems. Pedicels 6-10 mm long, rather slender, glabrous. Sepals about 6 mm long, lanceolate-subulate, glabrous. Corolla acutely pointed and pentagonal in bud, when expanded 3-5 cm in diameter, campanulate, with a long, bell-shaped tube and ascending-spreading or gradually recurving lobes, glabrous and without spots outside, clear or dirty sulphur-yellow to pale buff on the inside, marked on the lobes and upper part of the tube with blood-red dots, which pass into transverse interrupted lines on the lower part of the tube, covered from the middle of the tube to the base or to 2/3 of the way up the lobes with long stiff clavate purple hairs, which become minute upon the lobes, each seated on a purple-brown papilla, with the tips and margins of the lobes papillate. Tube 1.5-2 mm long. Corolla lobes 12-18 mm long and nearly as broad, deltoid, acuminate. Outer-corona 5-lobed, blackish or blackish-crimson, lobes subquadrate, emarginate or shortly and obtusely bifid. Inner corona-lobes 3-4 mm long, subulate, slightly gibbous at the base, connivent over the style-apex at the basal part, then divergent-ascending, with suberect tips, purple. Occasionally 6-lobed flowers are produced, but this is not a constant character, the plant always reverts to the normal 5-lobed flowers.
Fruits: The fruit are paired spindle-shaped capsules (follicles), resembling the horns of an antelope, with the tightly packed seeds inside. At maturity they split open to release numerous small brown seeds crowned with long white hairs.

Subspecies, varieties, forms and cultivars of plants belonging to the Huernia barbata group 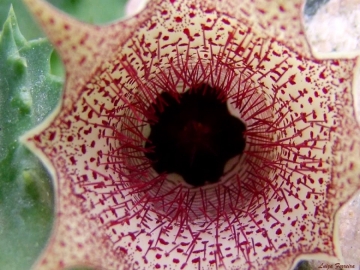 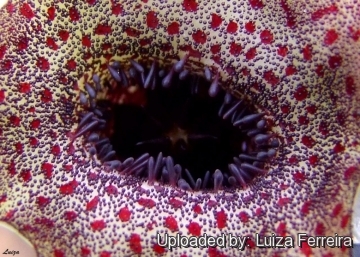 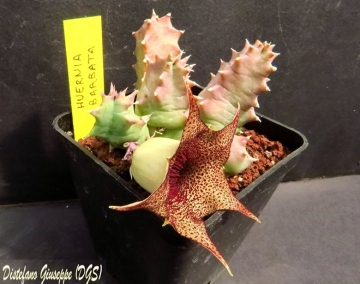 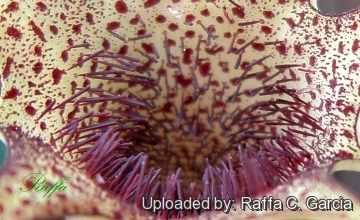 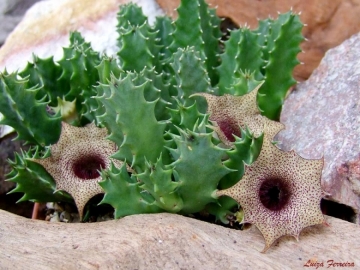 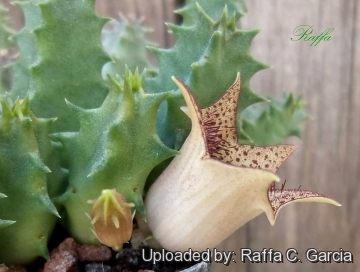 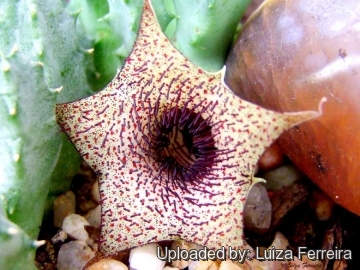 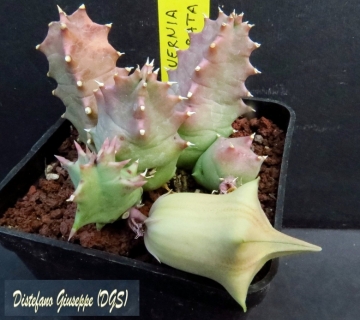 Cultivation and Propagation: Huernia barbata has been long known and grows well in cultivation.
Spring: When winter ends and they begin to grow again, they will require much water and soaking the pots will no longer put the plants at risk for rot. In the spring they will grow well in partial shade and leaving them out in the rain may provide them with the water they need.
Summer: In the summer months they will tolerate heavy rain, but will be just as happy if the season is dry. It's best to sort out the stems while the plants are resting in the summer before they begin their autumnal growth cycle. They will tolerate very hot weather outdoors as long as they are kept in filtered light and this will encourage them to flower in the Autumn. They also enjoy some fertiliser. Moving the plants as they are developing buds may cause them to spontaneously abort the flowers all together.
Autumn: In the fall keep them outdoors until the night time temperatures drop below the 10°C.
Winter: Winter care presents no problems at 10° C with plenty of light. As soon as they are flowered be sure to take extra precautions to keep them dry, because damp cool conditions when the plants are resting is an invitation to fungal infections, but - according to temperatures –some occasional lit watering may be useful.
Potting medium: Since roots are quite shallow, use a cactus mix or add extra perlite or pumice to regular soil potting soil. A gritty, very free-draining compost is suitable, and clay pots help the plants to dry out between watering. Re-pot every 2 years.
Pest and diseases: Huernia are generally fairly easy to grow, especially if kept pest-free. They are very susceptible to stem and root mealy bugs, and damage from these may well initiate fungal attack. Any time when there is a dead or dying stem in the pot it is important to remove it immediately and completely before other healthy stems can become ill too, isolate the healthy parts, dry them off, and re-root them in new compost.
Propagation: Easiest with stem cuttings. Allow cuttings to dry a day before planting. Stems must be laid (Not buried) on gritty compost and will then root from the underside of the stems. It can also be increased from seeds sowing in spring in moist, sandy peat moss. Barely cover seeds. Seeds germinate quickly.
In any season it's best to lay the stems out for several days before replanting them and then pot them only in dry soil and withhold any water until they begin to shrivel or start growing again.