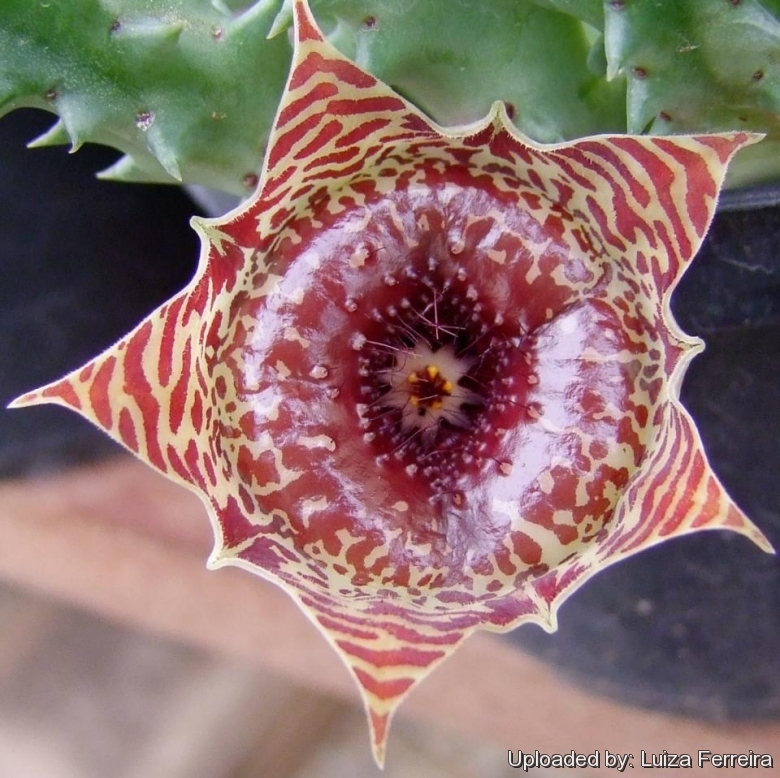 Origin and Habitat: Republic of south Africa (Gauteng, Limpopo, Mpumalanga, North West). Huernia transvaalensis is found in a small area in northern south Africa between Vryburg, Pretoria, Lephalale and Marble Hall.
Altitude range: 900 - 1200 metres above sea level.
Habitat and Ecology: Savannah. This species grows in flat areas in open veld under the shade of shrubs, low trees and grasses, occasionally in stony ground and on hills together with Huernia loesneriana, Caralluma lutea and Caralluma melanacantha.

Description: The "Transvaal huernia", botanically known as Huernia transvaalensis, is an attractive tufted, leafless succulent, consisting of a number of four- or five-angled pinkish grey stems with darker markings, occasionally forming loose clumps or carpets. It is not as freely blooming as the others species in cultivation, but extraordinary when it does flower. The five-pointed flowers range between 4 and 5 cm in diameter, colour alternates between pale yellow or cream and purple patches. These patches exhibit great irregularity in shape and size, unlike Huernia zebrina where the same two colours achieve almost linear regularity or Huernia guttata (and several others) where speckles or spots prevail. It is one of the so-called “lifebuoy” huernias because of the glossy raised annulus.
Habit: It form loose clumps or mats covering large areas up to 100 mm tall.
Derivation of specific name: “transvaalensis” (Latin), of the Transvaal area in North West South Africa.
Stems: Prostrate to decumbent, compact, more than 10 cm long , c. 11 mm thick, prominently 4- to 5-angular. Stems angles wing-like, compressed and toothed greyish-green or pinkish grey, with darker markings.
Flowers: Five-pointed, stubby, star shaped, mostly facing upward and developed from the base. Pedicels up to 25 mm long. Sepals c 10 mm long. Corolla 40-55 mm across, outside greenish-creamy with maroon, inside swelling into a prominent circular bulge (or annulus) around the corona at the centre and suggestive of “lifebuoy”. Corolla-tube short, basally 7-8 mm in diameter, to 3 mm above the ground smooth and glabrous, above the tube and inner part of the annulus unmarked, dark maroon to reddish purple, very glossy, margin of the annulus cream-coloured to yellowish, with irregular zebra-like markings, the papillae at the mouth of the tube carrying scattered papillae, these conical or obtuse, apically hairy, hairs purple1 5-4 mm long, rigid, needle-like, sometimes cylindrical, obtuse. Lobes spreading-erect, pale yellow irregularly patterned with purple red cross bands or patches, finely pubescent, hairs short, acute. Large obtuse angles occurring between the deltoid, often low peaked isosceles triangle lobes. The lobe tips are elongated, attenuating to acute points. Corona 4.5-5 mm wide. Inner corona lobes about 3 mm long, purple, erect with tapered to acute tips or slightly recurved, meeting each other or slightly divergent. The outer corona consists of rectangular lobes, 1.5 x ± 3 mm, each forked into two sections, yellowish in colour with purple margins. Pollinia yellow, germination mouth region darker.
Fruit: A pair of follicles. When the follicles are fully-matured they burst open to release the seeds, each of which has a tuft of hair (or coma). 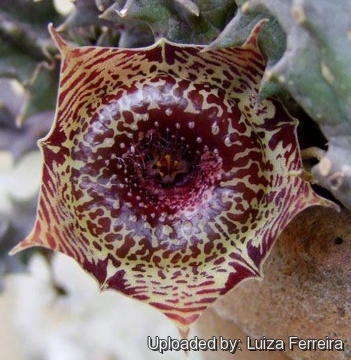 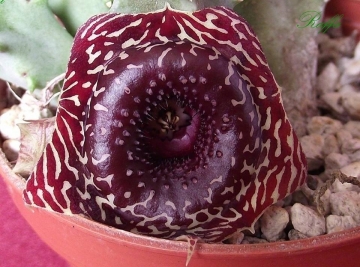 Cultivation and Propagation: Huernia transvaalensis is an easy obliging blooming plant when mature, that it is happy in any average succulent house.
Potting:Since roots are quite shallow, use a soft and incoherent cactus mix or add extra perlite or pumice to regular soil potting soil, and clay pots help the plants to dry out between watering.
Waterings: Huernias require moderately watering through the growing season but enjoy plenty of water and some fertiliser in hot weather, this helps them to flower freely. Water more sparingly in winter according to temperatures. But, as with most asclepiads, it is unwise to leave them wet in cold weather.
Fertilization: Fertilizers for succulent plants must be rich in potassium, but poor in nitrogen, to avoid the plants from developing excess vegetation, which is easily attacked by fungal diseases.
Sun Exposure: As with many succulents, they prefer to grow in the light shade of scrubby shrubs or between rocks where they get some shade during the day. In summer it is advisable to position this plant in a partially shady place, where it is exposed to direct sunlight only during the coolest hours of the day.
Hardiness: These plants don't like cold weather, therefore in the Spring it is best to set them outside only when the temperatures are above 15°C. Can endure temperatures below 5°C for short period, but only if the soil stays completely dry.
Pest and diseases: Huernias species vary in their susceptibility to rotting, but are generally fairly easy to grow, especially if kept pest-free. They are very susceptible to stem and root mealy bugs, and damage from these may well initiate fungal attack. If you do have problems with a stem or with basal rotting, you can reliably isolate the healthy parts, dry them off, and re-root them in moist compost.
Cultural Practices: Re-pot every 2 years.
Propagation: Easiest with stem cuttings. Allow cuttings to dry a day before planting. Stems must be laid (Not buried) on gritty compost and will then root from the underside of the stems. It can also be increased from seeds sowing in spring in moist, sandy peat moss. Barely cover seeds. Seeds germinate quickly.