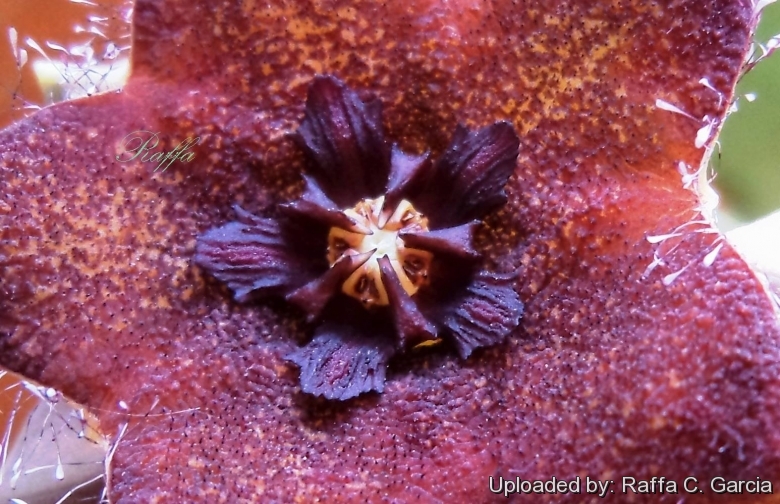 Origin and Habitat: South Africa, Northern Province and Mpumalanga (Transvaal), Maputo district in southern Mozambique, not recorded in Zimbabwe.
Altitude range: It usually grows at altitudes above 1000 metres above sea level.
Abitat and ecology: Orbea melanantha grows on stony flats, interlocked with the stems of sparse shrubs, as usually seen with most members of the Stapelieae.

Description: Orbea melanantha (Orbeopsis melanantha) known earlier as the 'Caralluma with black flowers', is a distinct stapeliad characterized by stout stems 80-100 mm tall, the denticles on the stem teeth being very prominent on young sterns, but as the stems thicken the denticles are reduced to scars. Orbea melanantha is distinguished from all other species of Orbea, except Orbea lutea, by its dense clusters of more or less simultaneously opening, uniformly coloured, dark red to almost black, and fairly large flowers (50 mm across).
Stems: Decumbent at the base, 4-angled, 5-10 cm high (to15 or more cm in cultivation), 15-25 mm across excluding teeth. Teeth 6-10 mm triangular acute spreading.
Flowers: Blackish or dark purple-brown in sessile umbels of 3-10 on a very short spur from middle or upper stem. Pedicels about 12 mm long, glabrous. Sepals 7 mm long, lanceolate, acuminate, glabrous. Corolla 3.5-5.5cm across, rotate, lobed to the middle, the disc flat without a tube. Inside closely transversely wrinkled. black-purple or rust-red, sometimes finely yellow spotted hairless to densely hairy or downy, the margins are ciliate with vibratile clavate hairs. Lobes triangular to ovate, acute or shortly acuminate about 18 mm long, 12 mm broad at the base. Outer corona-lobes erectly-spreading over corolla, oblong to obovate, connate at the lower half, semi-oblong (transversely oblong may be intended) in outline above, irregularly crenulate, slightly 4–6-grooved on the back. Inner corona-lobes ligulate, porrectly incurved above the anthers with inner horn and intricately excavated exterior at the thickened base, the horn and channel-wings usually variously ornamented.
Blooming season: Summer-autumn. 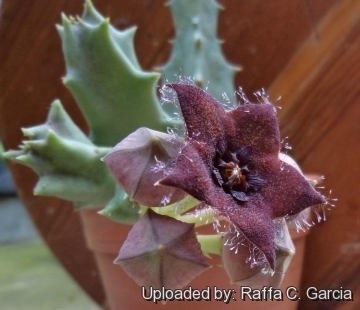 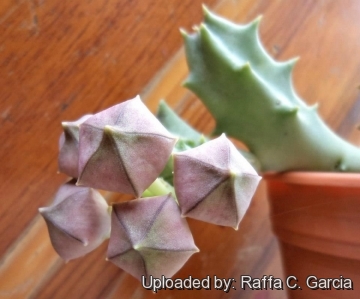 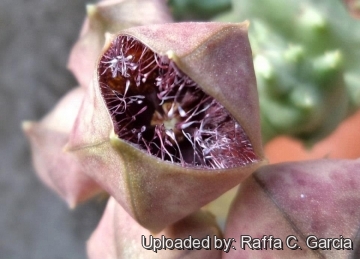 Orbea melanantha Photo by: Raffa C. Garcia
Send a photo of this plant.