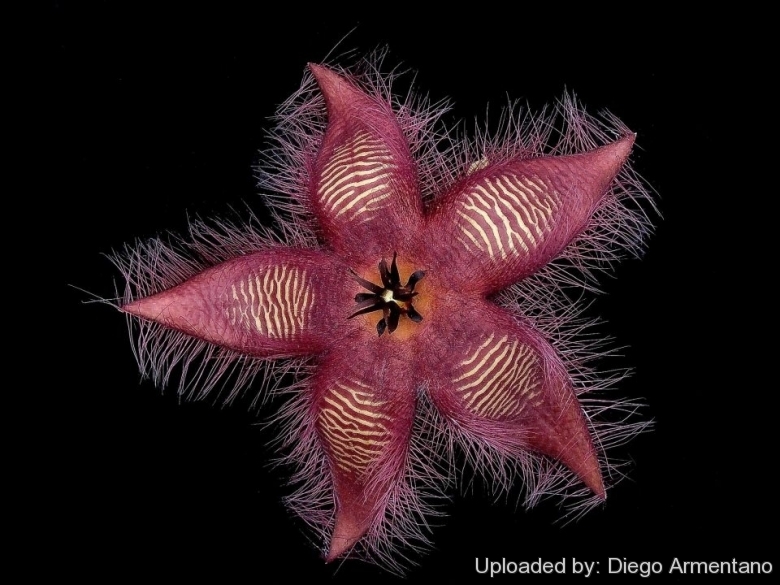 Origin and Habitat: Stapelia gettliffei originally discovered in 1911 by Mr. G. F. Gettleffi at Louis Trichardt in the Zoutpansberg division of the Transvaal is native to the warmer, dry, sandy parts of the Limpopo River catchments in southeastern Botswana, the northern parts of South Africa, southern Zimbabwe, and just over the border into Mozambique to the east.
Habitat and ecology: It usually spraws in low-lying areas in the shade of bushes or in the open where the plants are more erect and tightly knit, often with other stapelias of the same localities.

Description: Stapelia gettliffei is a stem succulent that resembles a cactus; the branches are velvety, spineless, quadrangular in cross-section and determinate, ceasing growth when less than 25 cm cm tall, may form big clumps up to1 m in spread. The striking star-shaped flowers have long pedicels and lie face-up on the ground around the plant; the corolla (diameter about 15 cm) is marked in purple lines on a cream-coloured background, the disc densely covered with soil purple hairs round the corona, the margins ciliate in white. The peculiar fashion in which the unusually large rudimentary leaves are disposed, in an erect position close to the angles of the stem, at once distinguish it from all the allied species even when it is out of flower. Although S. gettliffei appears to be the most widely accepted spelling it also frequently appears as either S. gettleffei or S. gettlefii.
Derivation of specific names: The specific epithet honours G. F. R. Gettiffe (1873- 1948) who worked as a water driller and then as a farmer in the Transvaal. In the course of his travels in remote regions he collected unusual plants which he sent first to the Transvaal Museum and later to the Division of Botany, Pretoria.
Stems: Decumbent at the base then erect,, 4-angled. 20-25 cm high, 12-16 mm square, with concave sides and compressed and toothed ribs, velvety pubescent, green. The stems turn red in the dry season and become paper-thin.
Leaves: Rudimentary on the tips of teeth, long, narrow, adpressed-erect more or less incurved, acute 10-12 mm long, the largest in the genus.
Inflorescences (cymes): Subsessile, produced near the base of the young stems, with 1-3 flowers successively developed. Pedicels 7.5 cm long, 1.5 mm thick, velvety pubescent, facing upwards or pendulous.
Flowers: Sepals 12 mm long, lanceolate, acute, velvety puberulous. Corolla 15-16 cm in diameter, deeply 5-lobed, with the lobes extended, the back greenish-yellow, minutely puberulous outside, the inner surface transversely rugose, purple, yellowish tinted at the centre, marked with transverse yellowish lines from the base to the tip of f the lobes, leaving the margin and extreme tip intact; the flat disk 2.5 cm in diameter; lobes 6.5 cm long, 2,5 broad in the middle, lanceolate, acute, flat, slightly recurved ; disk and very base of the lobes densely covered with long, fine, downy, intermingled light- purple hairs, the remaining part of the lobes puberulous, the margins ciliate with rather coarser whitish and light purple hairs of about 12 mm long. Corona double, dark purple; lobes of the outer corona dark purple-brown, erect-spreading with recurved tips, 5-6 mm long deeply channelled down the face, tapering into a subulate point. Inner corona-lobes dark purple-brown, recurved spreading incumbent on the anthers, 12 mm long with the dorsal wing 6 mm long, adnate for the whole of its length to the inner horn and truncate and toothed at the top. Inner horn triquetrous, subulate, recurved, not hooked at the apex.
Blooming season: Flowering occurs from December-May.
Related species: Its nearest ally Stapelia hirsuta is separated from S. gettleffii by a distance of 950 kilometres. 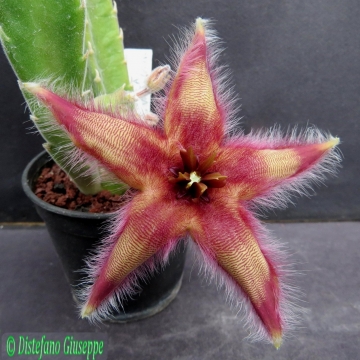 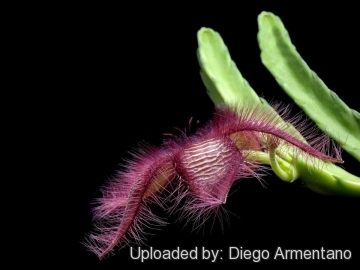 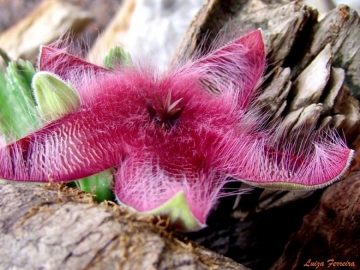 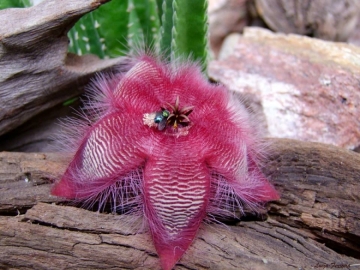 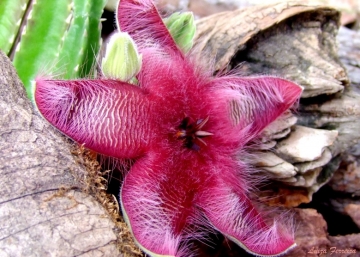 Cultivation and Propagation: Fertilize once during the growing season with a balanced fertilizer diluted to ½ the strength recommended on the label. They need a well-drained potting-mix and can withstand extreme heat but avoid direct sun in summer. Best in partial sun or light shade.
Frost Tolerance: They need a cool, dry rest period in winter but keep above 10°C and avoid any frost.
Propagation: are propagated by stem cuttings. Take cutting in spring when new growth begins. Let cuttings callus up for 2-3 weeks before planting.