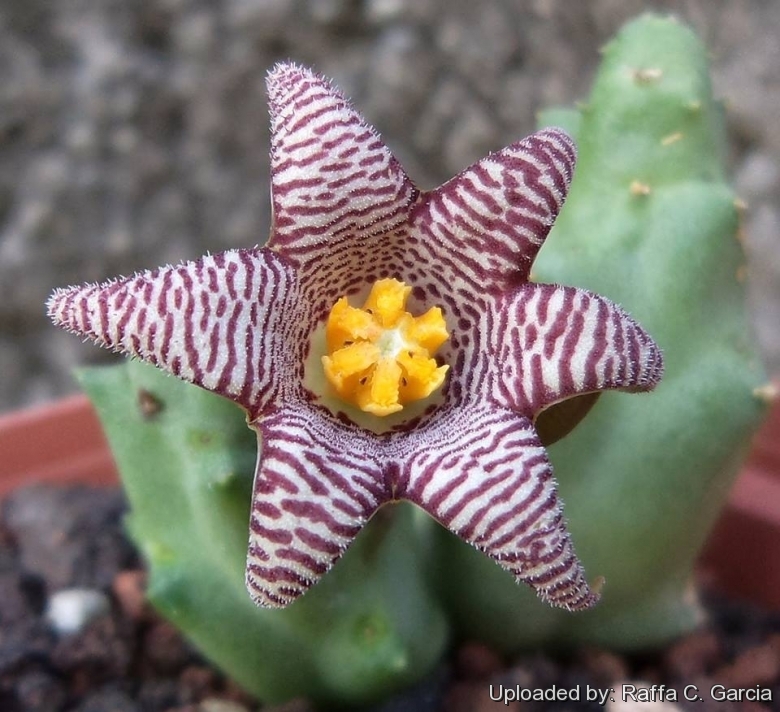 Origin and Habitat: Western Cape Province (Little Namaqualand).
Habitat and Ecology: Piaranthus punctatus grows interlocked with the stems of shrubs, as usually seen with most members of the Stapelieae. In contrast, the closely related Piaranthus framesii prefers the Higher areas of the Namaqualand Succulent Karoo. Recent collections are also indicative of the presence of hybrid populations.

Description: Piaranthus punctatus is one of the most beautiful species, whose flowers differ from all the others by its clearly developed corolla tube. The corolla lobes are broadly lanceolate, pointed, white to ivory-coloured with reddish or brown patches or transverse bands; the upper side has fine, papillous warts. Colour variations occur in the species. Piaranthus superficially resembles Huernia, but the flower stalks emanate all along the length of the stems, also near the top. In Huernia species flowers grow from the stem base. Huernia flowers grow solitary, while Piaranthus may issue more from the same node. There is no annulus here, common in Huernia.
Stems; Decumbent or ascending, 1-6 cm long (to 15 cm in cultivation), 8-20 mm thick, oblong or somewhat clavate, or cylindrical, slightly rough, very obtusely 4-angled, with 4–5 small tubercle-like teeth along each angle, glabrous, dull green.
Inflorescences: 1- to several flowered. arising above the middle of the stem. Pedicel 5-15(-25) mm long, 1.5-2 mm thick, glabrous, purplish.
Flowers: Scentless or honey-scented, five-pointed, star-shaped displaying strong recurving corolla lobes. Sepals lanceolate, acute, glabrous 2 - 3 mm long. Corolla 18-28 mm in diameter fused in the central half with a distinct cup-shaped to shortly campanulate tube 6-9 mm in diameter and 3-6 mm long, round. The outside of the corolla is shiny and greenish cream with a few vertical rows of dark red dots. Lobes about 6-9 mm long, 3-7 mm broad, lanceolate, acute, spreading, papillate (puberulous?) on the inner face, whitish faintly tinged with pink, , dotted with blood-red or brown patches or transverse bands. Papillae blunt to acute. conical. 0.1 - 0.2 mm. Corona 3 -4.5 x 3.5-5 mm barrel-shaped. The unopened buds show thick, spiny protrusions halfway up their length on the seams of the lobe margins.

Subspecies, varieties, forms and cultivars of plants belonging to the Piaranthus punctatus group 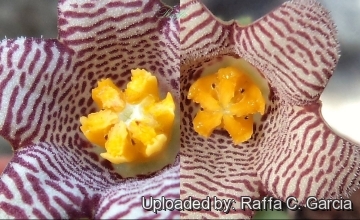 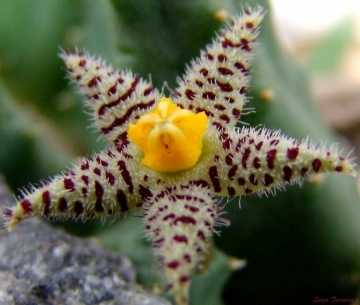 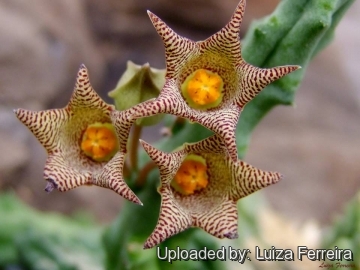 Piaranthus punctatus Photo by: Luiza Ferreira
Send a photo of this plant.

Cultivation and Propagation: Piaranthus punctatus is an easy obliging blooming plant, which is happy in any average succulent house. This plant is common to warrant any description, let it suffice to say that this plant is easy to grow and flower, and one which will tolerate most soils and growing conditions.
Soil: Since roots are quite shallow, use a cactus mix or add extra perlite or pumice to regular soil potting soil. A gritty, very free-draining compost is suitable, and clay pots help the plants to dry out between watering.
Watering: They require moderately watering through the growing season but enjoy plenty of water and some fertiliser in hot weather, this helps them to flower freely. Water more sparingly in winter according to temperatures. But, as with most asclepiads, it is unwise to leave them wet in cold weather.
Hardiness: Winter care presents no problems at 5°C with plenty of light.
Sun Exposure: Partial sun or light shade.
Pest and diseases: They are generally fairly easy to grow, especially if kept pest-free. They are susceptible to stem and root mealy bugs, and damage from these may well initiate fungal attack. If you do have problems with a stem or with basal rotting, you can reliably isolate the healthy parts, dry them off, and re-root them in moist compost.
Cultural Practices: Re-pot every 2 years.
Propagation: Easiest with stem cuttings. Allow cuttings to dry a day before planting. Stems must be laid (Not buried) on gritty compost and will then root from the underside of the stems. It can also be increased from seeds sowing in spring in moist, sandy peat moss. Barely cover seeds.