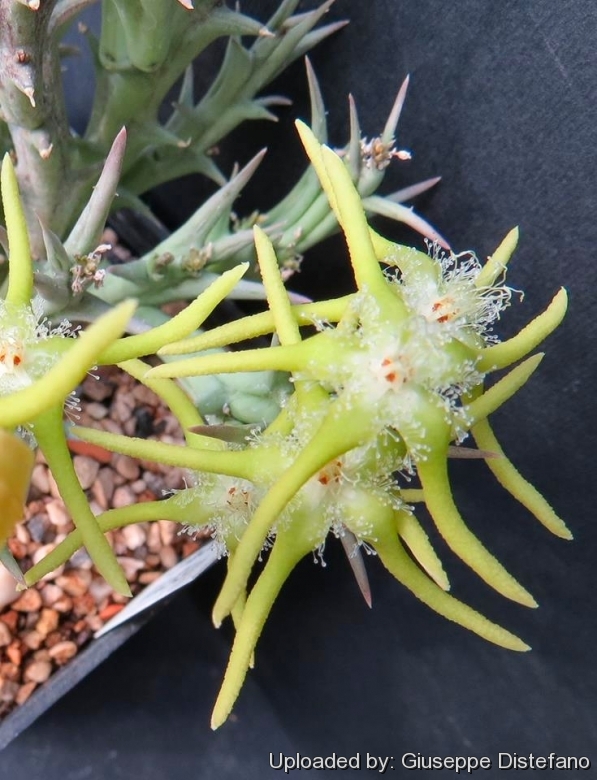 Origin and Habitat: Botswana (and Zimbabwe?).
Habitat and ecology: Orbea rogersii grows in varying soils, in grasslands, among sparse trees.

Description: Orbea rogersii (L. Bolus) Bruyns was at first regarded as a Stapelia but its characters, taken together, seem to place it better in Orbea or Caralluma. It is, however, rather an anomalous form which has no close relatives. It is a dwarf soft stemmed succulent quite widespread in cultivation for the attractive and often very numerous bright yellow flowers with clavate and vibratile hairs which form a fringe in the centre of the corolla. These hairs hardly remain still and move in the slightest breeze, possibly attracting insects. In age forms big clumps or mats of vegetation.
Stems: Erect or ascending, and branching from the base to 10 cm long and 8 mm wide, sides grooved; Tubercles subulate, very acute, ascending or horizontally spreading.
Inflorescences: 3 - 4 per stem, several-flowered. Peduncle 13-15 mm long. Sepals 3 - 4 mm long. Corolla 30-35 mm in diameter pale yellow, flat, deeply incised, united part 5.6 mm in diameter. Corolla lobes up to 14 mm long and less than 4 mm wide linear, acute, bent inwards or ascending, margins in the upper part revolute, onside basally ciliate, club-shaped. Hairs transparent 1.7 mm long directed inwards. Corona yellowish ca. 3.5 mm in diameter, margins purple. Outer and inner coronal lobes only basally shortly united. Inner corona lobes about 2 mm long rectangular, inside with longitudinal groove, apically toothed, basally spreading horizontally, apically bent upwards. Outer corona lobes broadly triangular when seen from above, divided into 2 filiform appendages to the base, apical appendage 5. 7 mm erect ascending over the style head and intertwined, basal appendage 5 5 mm, filiform, erect, inter-twined with itself. 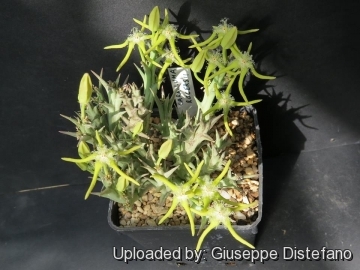 Cultivation and Propagation: Orbea rogersii is one of easiest species to grow but prone to root rot due to overwatering and lack of fresh air.
Potting medium: Since roots are quite shallow, use a gritty, very free-draining compost. Extra perlite or pumiceis suitable, and clay pots help the plants to dry out between watering.
Moisture: Water normally in the growing season, sparsely in the winter.
Spring: In the spring leaving them out in the rain may provide them with the water they need.
Summer: In the summer months they will grow well in full sun or partial shade and tolerate heavy rain, but will be just as happy if the season is dry.
Winter: It is usually recommended to over-winter them in warm conditions (at 10° C), but despite their African origins they seem to grow well and flower without the extra heat which one might have thought necessary, and occasional temperatures near 0°C (or less) are tolerated, if kept dry.
Note: Indoors only in brightest position.
Pests & diseases: It is quite resistant to the “Balck spot” disease of Asclepiads.
Propagation: Propagation is done mainly from cuttings.