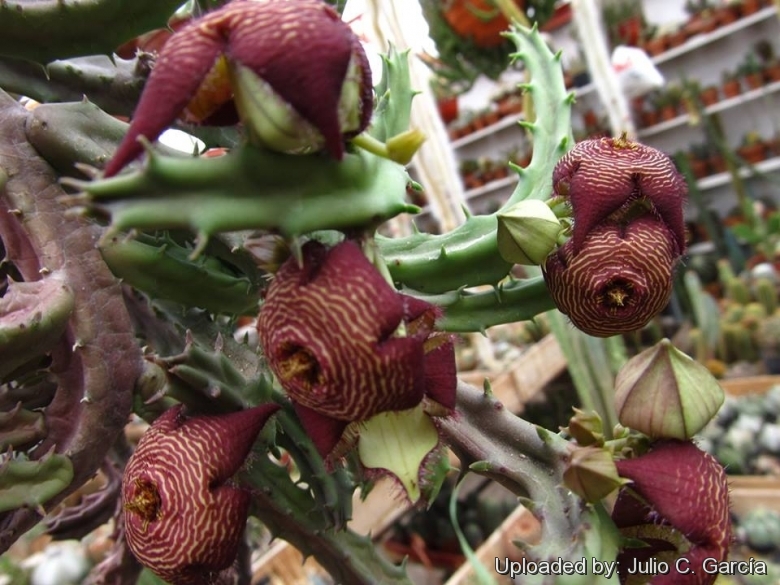 Origin and Habitat: This species occurs in the arid western winter rainfall area of the western and northern Cape, particularly in districts like Clanwilliam and Lutzville, Republic of South Africa.
Habitat and ecology: Grows under bushes.

Description: Tromotriche revoluta var. trigridia (often misspelled tigrida) is a distinctive freely flowering variety with revolute (rolled backward or downward) corolla lobes patterned with conspicuous wine-red or maroon and light yellow concentric stripes which vary in colour intensity. It is assumed that the tigrida alludes to it's stripes. In all other characteristics, namely stems, size and shape of flowers, fruits, roots etc. it is very similar to the standard species and is not considered separate from Tromotriche revoluta by all the expert.
Habit: It is a rhizomatous succulent that readily offsets to form a sparingly branched shrub to 30 cm tall.
Stems: Leafless, erect, succulent 15 to 45 cm high, sometimes longer under cultivation,15-30 mm in diameter, sometimes poorly segmented, conspicuously 4-angled, with slightly concave sides and small, sharp teeth 2-3 mm long on the angles, glabrous, glaucous-green. It forms slender rhizomatous stolons, sometimes scattered over large areas, rarely in clumps, more or less cylindrical and spreading horizontally over the ground.
Leaves: Rudiments minute, green to purplish, conical. Stipular rudiments conical, persistent, corky with age. Yellow-brown.
Flowers: 1–3 together, from the sides of the upper part of the stems, successively developed. Pedicels 6-15 mm long, glabrous. Sepals 5-8 mm long, lanceolate, acuminate, glabrous. Corolla lobed to halfway, with the lobes very much recurved (sometimes so as to touch the back of the flower) and then 30-45 mm in diameter, glabrous and smooth on both surfaces, outside greenish yellow, inside patterned with conspicuous wine-red or maroon and light yellow concentric stripes which vary in colour intensity and paler at the base of the lobes. Disk with a short swollen tube-like depression about 8 mm in diameter, embracing the corona partly (rarely completely), annulus strongly thickened, not raised into a ring around its mouth, base of the tube papillose. Lobes 14-18 mm long and as much in breadth, ovate, acute or shortly acuminate and slightly reflexed, margins strongly reflexed with long, club-shaped, vibratile, purple hairs. Corona sometimes more or less sessile, inside yellow to red-brown (centrally paler), very variable in size, sometimes spreading to 6-8 (or more) mm in diamete. Outer corona-lobes 2.5-3 mm long, 2-2.5 mm broad, subrectangular, ascending or horizontally spreading slightly narrowing at the 3-toothed apex, purple-brown with a yellowish base. Inner corona-lobes bifid, purple-brown at the base, dull yellowish dusted with dull purple-brown on the upper part. Outer horns spreading, 1.5-3 mm long, laterally flattened, slenderly linear, obtuse. Inner horns yellow. speckled purple connivent-erect at the base, recurving above, 4-6 mm long, filiform, clavate or 2-horned and very minutely tuberculate at the apex. Pollinia 0.8 x 0.5 mm broadly D-shaped.
Fruits (follicles): Subparallel, 10-12 mm long, about 10 mm thick, fusiform, tapering into an acute slightly hooked beak, smooth, glabrous, glaucous.
Seeds: About 7 mm long, 4 mm broad, flattish, ovate, with a thickened margin, smooth, brown.

Subspecies, varieties, forms and cultivars of plants belonging to the Tromotriche revoluta group 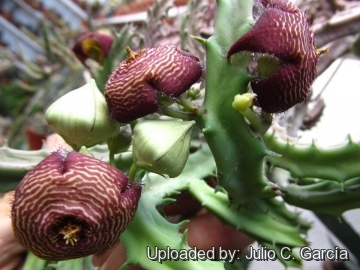 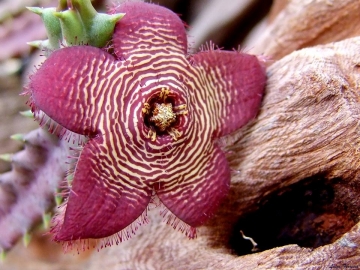 Cultivation and Propagation: Tromotriche revoluta var. tigridia is very easy to grow, it needs light shade (but tolerate shadow), very resistant to heat will also tolerate quite cold temperatures but avoid frost, best in a ventilated environment.
Spring: When winter ends and they begin to grow again, they will require much water and soaking the pots will no longer put the plants at risk for rot. In the spring they will grow well in partial shade and leaving them out in the rain may provide them with the water they need.
Summer: In the summer months they will tolerate heavy rain, but will be just as happy if the season is dry. It's best to sort out the stems while the plants are resting in the summer before they begin their autumnal growth cycle. They will tolerate very hot weather outdoors as long as they are kept in filtered light and this will encourage them to flower in the Autumn. They also enjoy some fertiliser. Moving the plants as they are developing buds may cause them to spontaneously abort the flowers all together.
Autumn: In the fall keep them outdoors until the night time temperatures drop below the 5°C.
Winter: Winter care presents no problems at 5°-10° C with plenty of light. As soon as they are flowered be sure to take extra precautions to keep them dry, because damp cool conditions when the plants are resting is an invitation to fungal infections, but - according to temperatures –some occasional lit watering may be useful.
Potting medium: Since roots are quite shallow, use a cactus mix or add extra perlite or pumice to regular soil potting soil. A gritty, very free-draining compost is suitable, and clay pots help the plants to dry out between watering. Re-pot every 2 years.
Pest and diseases: Tromotriche are generally fairly easy to grow, especially if kept pest-free. They are very susceptible to stem and root mealy bugs, and damage from these may well initiate fungal attack. Any time when there is a dead or dying stem in the pot it is important to remove it immediately and completely before other healthy stems can become ill too, isolate the healthy parts, dry them off, and re-root them in new compost.
Propagation: Easiest with stem cuttings. Allow cuttings to dry a day before planting. Stems must be laid (Not buried) on gritty compost and will then root from the underside of the stems. It can also be increased from seeds sowing in spring in moist, sandy peat moss. Barely cover seeds. Seeds germinate quickly.