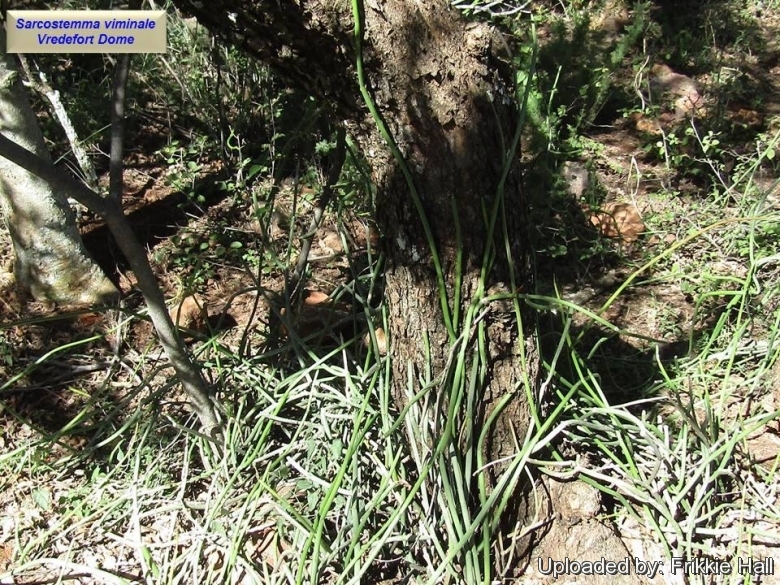 Origin and Habitat: Cynanchum viminale is a robust species distributed in South Africa, Botswana, Namibia and all inland parts of southern Africa as far north as Kenya and also India (South India, Bengal), and Burma. In coastal regions of Australia, China, India, the Philippines, Thailand and New Caledonia, the plant found is usually a member of the subspecies brunonianum. This has only minor differences from the main species, and the flowers are sweet-scented.
Habitat: It is found in the hotter and drier parts of Africa both on coastal and inland regions, from sea-level up to 1800 m altitude. It occurs in Acacia-Commiphora bushland in dry soils, rocks and out-crops, and along dry streams, often confused with Euphorbia species.

Description: Cynanchum viminale is a leafless succulent species consisting of smooth cylindrical green photosynthetic stems, pencil-shaped that tend to explore and scramble through their surroundings and rooting as they go. The yellowish flowers with a white corona or central crown are sweetly scented. This extremely variable and widespread species can be divided into a series of subspecies. All parts of the plant ooze a milky sap when damaged or cut.
Habit: This is a vigorous succulent creeper that grows in trees and shrubs up to 5 m or more high, sometimes stifling them. If it has nothing to climb on, it becomes a shrub itself.
Stems: Cylindrical, (3-)5-7(-10) mm in diameter, erect, climbing, trailing, sprawling, twining, scrambling or lianescent, with or without a main stem, succulent, green to grey-green, glabrous or pubescent when young, internodes 10-20 cm long. The lower base of stems becoming woody and sometimes with a very thick corrugated corky bark when old.
Leaves: Leafless or with minute triangular-ovate rudimentary leaves, scale-like, 1-2 mm long.
Flowers: Star-shaped, sweet-scented or at least slightly scented in sessile many-flowered terminal umbels from the nodes or on short lateral shoots. Umbels 2–30-flowered. Pedicels (2-)6-12(-30) mm long, glabrous or pubescent. Bracts minute, linear-lanceolate. Sepals 5, 1-1.5 mm long, ovate to suborbicular, acute or obtuse, margin membranous, glandular inside near the base. Corolla campanulate, pale greenish white, creamy-white or sulphur-coloured, glabrous on both sides. Corolla segments (petals), very spreading, divided almost to the base, 4-6(-8) mm long, ovate-oblong, subacute slightly curving upwards. Outer corona white, ring-like, crenately 10-lobed , much shorter than gynostegium, lobes of the inner corona thick, fleshy, obtuse, 0.6–1.8 mm long, as tall as the staminal column (or slightly longer) and concealing the anther. Staminal column very short. Stigmatic head conical or depressed-conical. Pollen-masses compressed, clavate.
Blooming season: Cynanchum viminale flowers (in habitat) during the second part of the dry season or at the beginning of the rainy season. The peak flowering period is during 2-3 weeks with individual flowers opening during 4-5 days.
Fruits (follicles): (5-)10-13(-18) cm long about 8 mm in diameter, lanceolate, tapering at both ends, shaped like a pair of horns, slightly diverging when 2 together, brown when ripe, opening to release soft hairy seeds..
Seeds: 3-6 mm long, broad, ovate, plano-convex, narrowly margined, slightly denticulate or entire at the broad end, minutely tufted-puberulous on the convex side, nearly glabrous on the flat side, minutely ciliate, dull brown. Coma (stalkless parachute)1.8 cm long.
Note: The names Sarcostemma aphyllum and Cynanchum aphyllum in their horticultural application belong to Cynanchum gerrardii.

Subspecies, varieties, forms and cultivars of plants belonging to the Cynanchum viminale group 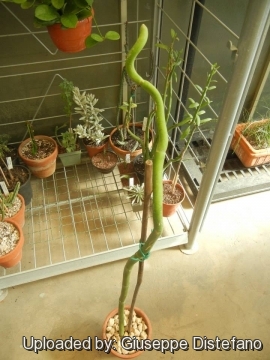 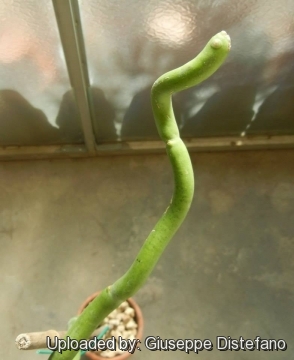 Cultivation and Propagation: Cynanchum viminale is an easy species to grow that is suited for any well drained soil in full sun. But young plant are happy growing indoors, where they can easily reach the ceiling. It can be confined to the footprint of a plant pot with a climbing frame and some creative basket weaving. Give the plant an airy growing medium which mainly consists of non organic material such us clay, pumice, lava grit, and only a little peat or leaf-mould. Water regularly during the active growing season from March to September. No water should ever be allowed to stand around the roots. Keep almost completely dry in winter. It is a relatively fast growing and long lived plant and once established, it will be content in its position and with its soil for years.
Fertilization: Need a perfect fertilizer diet in summer. Use preferably a cacti and succulents fertilizer with high potassium content including all micro nutrients and trace elements or slow release fertilizer.
Exposure: This plant has an excellent heat tolerance, and need full sun to light shade exposures, but can tolerate shade. However shade grown plants will tend to produce fewer, and etiolated growth. The colour of this plant is much more marked if grown in full sun. But if it is possible to keep the growth of this species compact, with denser, shorter stems such plants can be outright attractive.
Watering: Water regularly during the active growing season. No water should ever be allowed to stand around the roots. Keep almost completely dry in winter. Care must be given in watering, keeping them warm and wet while growing, and cooler and dry when dormant.
Hardiness: Some cold tolerance, however it can be difficult to get it to look its best without a good amount of heat and sun and so it is only really suited to the tropics (USDA Zones 9-12). It can be grown outdoors in the summer months to benefit from direct exposure to light, and especially exposure to high summer temperatures. Protection in a warm greenhouse in the middle of the winter will greatly increase the survival rate.
Disease and pests: The aphid occasionally feeds on young stems. The plant are also attractive to mealy bugs.
Rot: Rot it is only a minor problem with Cynanchum if the plants are watered and “aired” correctly. If they are not, fungicides won't help all that much. It is very unlikely to lose this plant from root rot from excessive water.
Manteinance: Re-pot every two-three years. It like quite small pots, repot in early spring. It can be pruned for shape and branching and trim off the dead 'arms'.
Known hazards: As mentioned above, all parts of the plant exude a milky latex when damaged. Contact with the latex should be avoided. This latex is sometimes – but not always – toxic may cause dermatitis in some people, and particularly dangerous for the eyes and mucous membranes. Young soft stems are sometime chewed and swallowed, in dry areas [We do not suggest plants for consumption!] The plant is usually avoided by stock, but they will eat it in times of drought when palatable fodder is scarce. The plant may affect horses, cattle, sheep and goats. Fresh or dried plant poisonous, sufficient to kill a sheep. It attacks the central nervous system and, later, the kidneys. Clinical signs occur within about 8 hours, and death usually occurs 12–24 hours later, although the larger animals may take longer to die. Cynanchum viminale has many traditional
Propagation: The plant can be reproduced by seeds or cuttings. The seed will loose viability in storage, and may not be viable the following year, so the seed should be planted as soon after harvesting as possible. Use a well-drained sowing medium of sandy loam with very well-rotted compost, and preferably sieved river sand to cover the seed. The ideal size of the sand grains should be 1 mm. Germination usually occurs within about a week or two. Cuttings are relatively easy in a 1:1:1 mixture of pumice, vermiculite and potting soil, at c. 27°C. If you remove an offset, remember to let it dry for some days, letting the wound heal (cuttings planted too soon easily rot before they can grow roots). Lay it on the soil and insert the stem end partially into the substrate. Try to keep the cutting somewhat upright so that the roots are able to grow downward. It is better to wash the cut to remove the latex. The newly planted stems take a few weeks to establish, and then start growing. The best time to strike cuttings is spring.