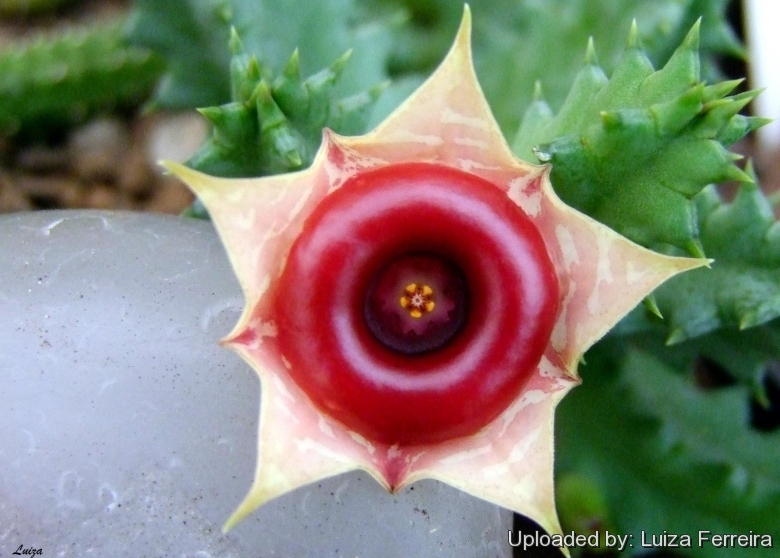 Description: Huernia zebrina subs. insigniflora (Huernia confusa) is a remarkable perennial succulents species with dull greyish-green, 4-angled stems tinged with pink, with acute, spreading teeth. It forms small dense clumps up to 10 cm in diameter. The wide-opening, star-shaped flowers have a distinct, liver-coloured raised ring or annulus at the centre, which looks exactly like a life-belt, and ivory to pink spreading lobes. The corolla lobes are unmarked or, sometimes, faintly mottled or barred and shortly pubescent. Its stems differ from the related Huernia zebrina in being greyish-green with smaller teeth on the angles. Only some authors consider Huernia insigniflora to be a good species on its own; the others classify it as a subspecies of Huernia zebrina. Huernia humilis in the sense of Schlechter belongs here.
Derivation of speciefic name: The species comes from the Latin 'extraordinary, remarkable' and refers to the striking flowers
Stems: Basally branching, erect, rarely exceeding 3 cm in length grey-green, quadrangular in cross section, 4- (rarely 5-) angular. Angles small, disappearing on older stems.
Inflorescences: Few-flowered, pointing outwards at the base of the stem. Pedicel c. 10 mm long.
Flowers: Opening one at a time in succession. Sepals to 6 mm long. Corolla 2.5 -3.5 cm across, outside light green, in-side greenish-white, ivory-coloured or light yellow, at times pink, tube and the glabrous annulus crimson to dark purple or liver-coloured, tube 7 x 6 mm. Corolla-lobes triangular, shortly pointed, divaricate, lightish yellow to dull gold unmarked or, sometimes, faintly mottled or irregularly transversely streaked with pale rose- pink or purple, outside partly finely roughened, inside puberulous, hairs maroon or streaked with reddish, short, acute, basally sometimes swollen. Outer corona cream-coloured to light yellow, rarely black-purple, some-times with maroon markings, lobes shortly lobed, fused into a disc, margin sometimes with 10 notches. Inner-corona yellowish with dark maroon margin, black or rarely dark maroon, basal hump ivory to orange, lobes acute as long as the Anthers or exceeding them: Poll yellow to dark greenish, elliptic to elongate-elliptic.
Blooming season: Flowering time (in habitat) is November-March.

Subspecies, varieties, forms and cultivars of plants belonging to the Huernia zebrina group 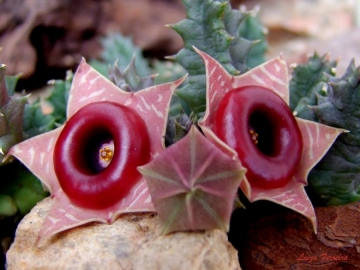 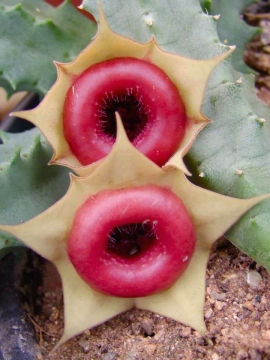 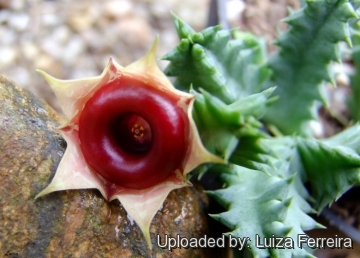 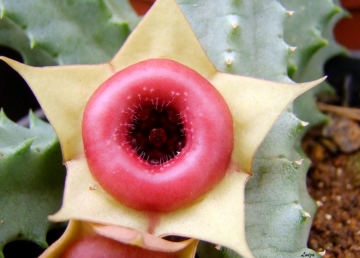 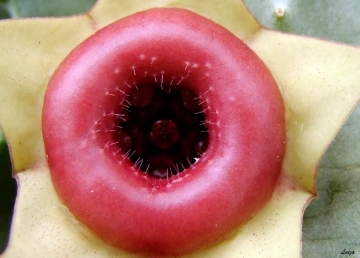 Cultivation and Propagation: Huernia zebrina subs. insigniflora isn't difficult to grow and flower. Both subspecies require a very draining substrate with a big portion of sharp sand or perlite or pumice. They need winter temperature over 10 °C and they need very careful watering during warm days. As with other stapeliads, the most dangerous diseases and pests are black rot and mealy bugs. The easiest way of propagation is by rooting stem cuttings or by sowing, if seeds are available. Half shade in Summer.