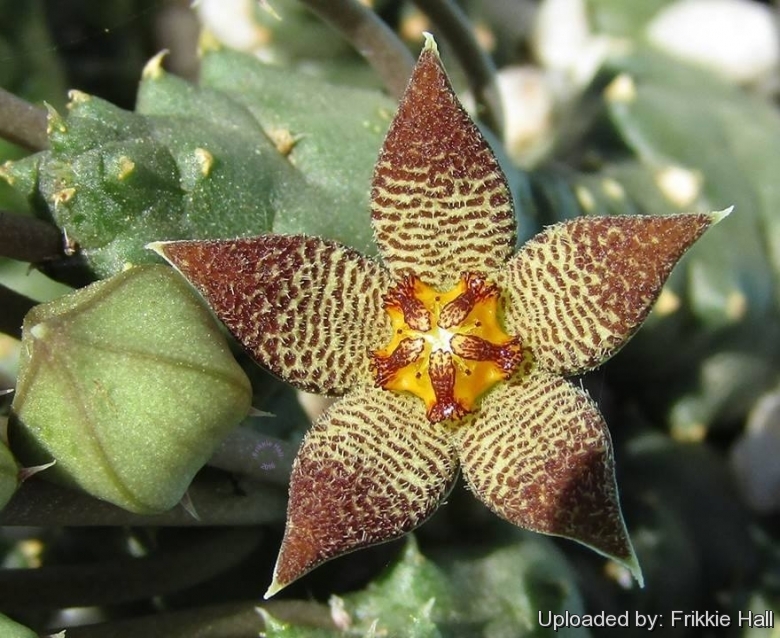 Description: Piaranthus geminatus var. foetidus, best known as Piaranthus foetidus, is a clumping and prostrate species that spread over the ground forming large cushions. This species shows a wide ecological amplitude, is very variable in colouration, and is the most common representative of Piaranthus.
Stems: Procumbent or ascending, tufted, 8-16(-20) mm wide by 2-5 (or under cultivation up to 12) cm long, divided in short squat ovoid or globose to short cylindrical, often clavate articles obtusely and sometimes indistinctly 4-(5-)angled, with 2-4 minute teeth along each angle, the tubercles tipped with a small acute apiculus having a minute tooth on each side at its base. Surface smooth or slightly rough, glabrous, light-green to grey-green, clouded or mottled with dull purple where exposed to the sun, tips faintly purple.
Flowers: 1 to 6 (but often 2) together near the top or at the middle of the stems, in a short inflorescence sometimes opening in pairs. Pedicels 6-18 mm long, erect, glabrous. Sepals 3-4 mmn. long, lanceolate or ovate-lanceolate, acuminate, with recurved tips, glabrous. Corolla ovoid to subglobose in bud, about (14-)18-22(-30 mm) in diameter when fully expanded, star-shaped, without a distinct tube, glabrous and green or tinted with purplish on the back, evenly pubescent, and velvety all over the inner face with short transverse purplish-crimson lines or lines and spots on a yellow ground, or sometimes the tips of the lobes are almost entirely purplish-crimson. Corolla lobes stout and fleshy, ovate or ovate-lanceolate, acute, convex above, concave beneath, from the recurving margins, 7-9 mm long, 3-5 mm broad, sometime basally fused, varying from ivory, to sand coloured, centrifugally increasingly patterned with brown-red dots or transverse lines (sometime condensed to a more or less plain colouration), densely hairy. Hairs 0.1-0.75 mm long, white, usually without but sometimes with a sparse ciliation of clavate vibratile hairs on the margins. Corona 2-3.5 mm long, 5-6 mm in diameter, yellow to orange. Outer corona-lobes 1.5-2 mm long, c 1 mm broad, closely incumbent upon the backs of the anthers, and equalling or shortly exceeding them, linear-lanceolate to oblanceolate, acute, entire or minutely denticulate at the apex, with raised lines and minute tubercles on the back, dorsally dilated at the base into a subquadrate crest 1.3-2 mm broad, truncate and denticulate-tuberculate on the top, deep orange-yellow, with the margins, the raised lines on the back and the tubercles of the crest all dark purple-brown. Flowers have a strong carrion-like odour or sweetish excrement odour, penetrating and perceptible at a short distance from the plant. Pollinia 0.55-0.7 x 0.3-0.4.
Blooming season: Produces numerous flowers simultaneously in October.
Fruits (paired follicles): 6-9 cm long.
Seeds: 4-5 by 2.5-3 mm.
Taxonomy remarks: The genus Piaranthus is a very confusing complex of extremely nearly related species with many intermediary forms growing together in many widespread localities and they are very difficult to distinguish. Also experienced botanist found difficulty to separate and classify reliably the various species and forms.
In particular Piaranthus geminatus var. geminatus is a very variable species which now also includes the former species Piaranthus globosus, Piaranthus disparilis, and Piaranthus pillansii.

Subspecies, varieties, forms and cultivars of plants belonging to the Piaranthus geminatus group

Notes: Pollination:
This plat are pollinated by flies (myiophilous pollination). Fly are attracted by olfactory stimuli, imitating dung or decaying organic (zoogenic or phytogenic) matter, together with mimetic colouration and, sometimes mimetic sculpturing. Nectar is present. The nectar mainly serves as optical attractant causing brilliance effects, and as visitor guide. However, nectar obviously is also a reward. In the pollination process flies carry pollinaria only at the distal parts of their proboscis, never on their legs. The pollinator spectra are similiar between of flowers in habitat and cultivated ones. 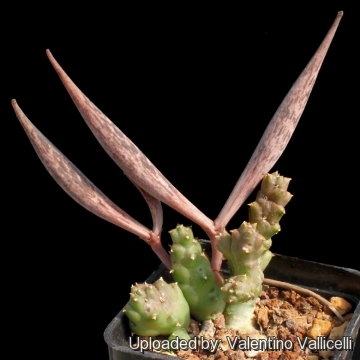 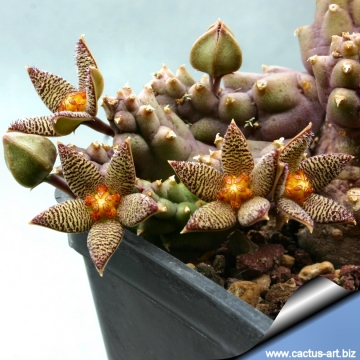 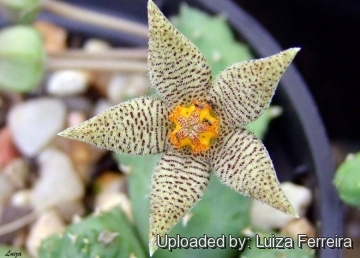 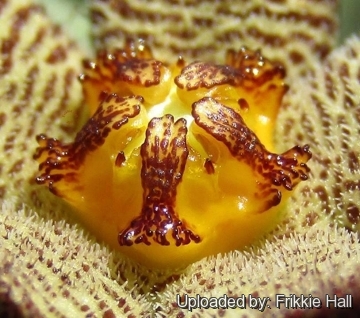 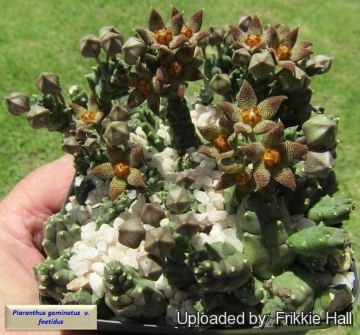 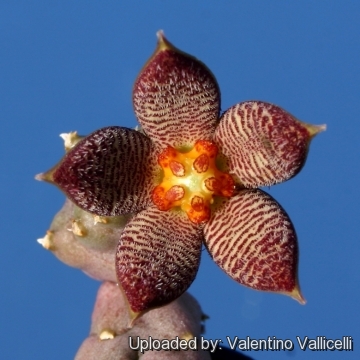 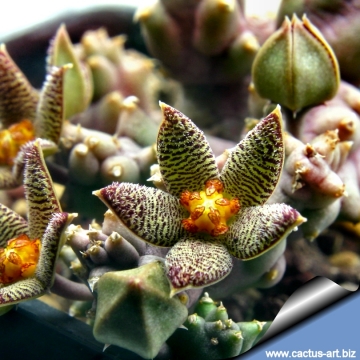 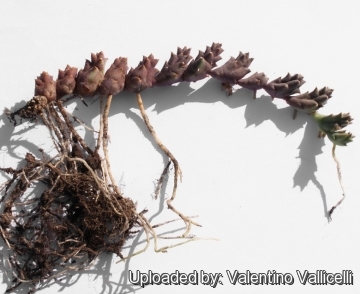