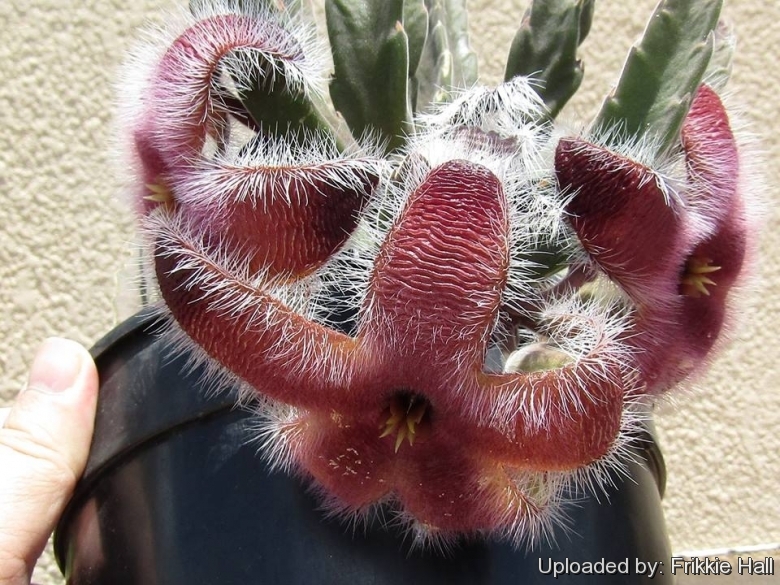 Description: Stapelia grandiflora is a tufted cactus-like plant with large and showy star-fish shaped flowers. Stapelia grandiflora is a very variable species with many hybrids both in the wild and in cultivation. This specie meets and intergrade with Stapelia hirsuta in the little Karoo and the two (quite similar) species can be separated by its thicker pedicel.
Habit: It is a relatively large, perennial, stem succulent that can form large compact clusters up to 50 cm in diameter (or more).
Stems: Erect or ascending 9-10(-30) cm long up to 3 cm in diameter (usually less than 2 cm). Soft, velvety, pale green or reddish and slightly furrowed with upright hooked tubercles along the ridges. Stems are clavate and quadrangular lengthwise, a factor which allows expansion and contraction to compensate without harm for any excess or shortness of fluids inside; hence they may appear flat- or sunken-sided according to the availability of water. This is the "succulence" and a storehouse for nutrients, which are crucial to their survival in harsh, xeric habitats.
Leaves: Short lived, rudimentary.
Flower: Blooms are produced from the base on younger shoots they are large, flat, star fish-shaped, orange, dark-red, deep brown-purple to chocolate, with transverse brow to whitish corrugation and densely covered by long purplish hairs at the centre that remember the fur of a dead animal. Pedicels 3-7 cm long, 4-5 mm in diameter, thickened at the base shorter than the corolla. Undersides red to greenish. Corolla width very variable, from 5-22 cm (usually 10/12 cm) across and very deeply lobed. Corolla segments ovate lanceolate acute. Buds plump peaked that resemble the domes of a Russian Orthodox church. Flowers smell like rotting meat and are very attractive to the flies that pollinate them. Sometimes flies lay eggs on the flower. Larvae that have hatched from the eggs can be seen on the flower. Flowers are smaller than those of Stapelia gigantea.
Fruit: Flies pollinate the flowers resulting in the typical twin seed horns (follicles), which are decorative in themselves and often don't appear until a year later.
Blooming season: Flowers are intermittently produced throughout the late summer and autumn.

Subspecies, varieties, forms and cultivars of plants belonging to the Stapelia grandiflora group 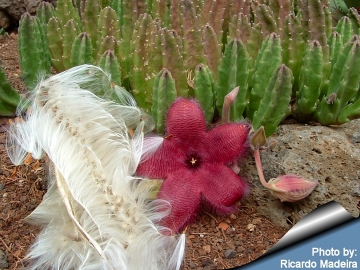 - The seeds furnished of a "parachute" (or coma) become airborne and are dispersed. As the tuft of hair (coma) dries out on the tip of the seed it unfolds into a parachute-like structure that carries the seed off in the slightest breeze. After a time the coma detaches and if the seed lands in a suitable place it will germinate and establish a new plant. Photo by: Cactus Art 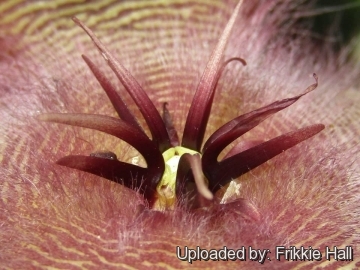 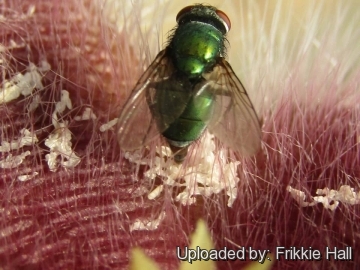 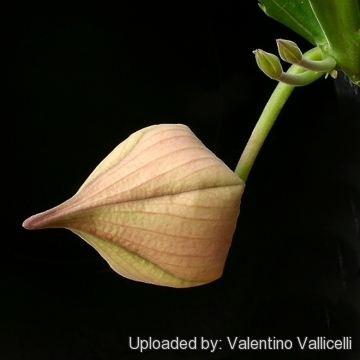 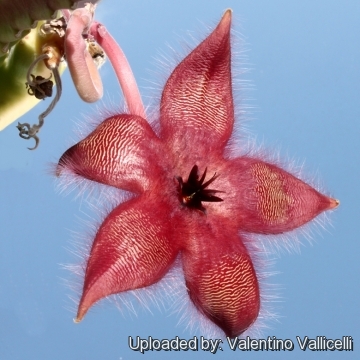 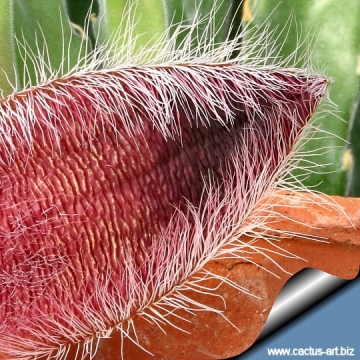 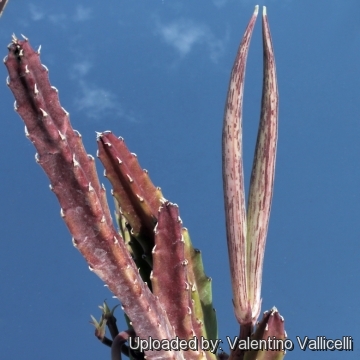 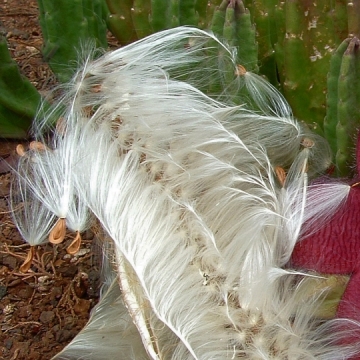 Cultivation and Propagation: Together with Stapelia gigantea and Orbea variegata, probably the most widely cultivated of stapeliads. It is an easy obliging blooming plant when mature, which is happy in any average succulent house.
Soil: Since roots are quite shallow, use a cactus mix or add extra perlite or pumice to regular soil potting soil. A gritty, very free-draining compost is suitable, and clay pots help the plants to dry out between watering.
Watering: Stapelia require moderately watering through the growing season but enjoy plenty of water and some fertiliser in hot weather, this helps them to flower freely. Water more sparingly in winter according to temperatures. But, as with most asclepiads, it is unwise to leave them wet in cold weather.
Hardiness: Winter care presents no problems at 5°C with plenty of light.
Sun Exposure: Partial sun or light shade.
Pest and diseases: Stapelia species vary in their susceptibility to rotting, but are generally fairly easy to grow, especially if kept pest-free. They are very susceptible to stem and root mealy bugs, and damage from these may well initiate fungal attack. If you do have problems with a stem or with basal rotting, you can reliably isolate the healthy parts, dry them off, and re-root them in moist compost.
Cultural Practices: Re-pot every 2 years.
Propagation: Easiest with stem cuttings. Allow cuttings to dry a day before planting. Stems must be laid (Not buried) on gritty compost and will then root from the underside of the stems. It can also be increased from seeds sowing in spring in moist, sandy peat moss. Barely cover seeds. Seeds germinate

by Luiza Ferreira
There are a total of 19 Photos.
Click here to view them all!
Cite this page: "Stapelia grandiflora" Text available under a CC-BY-SA Creative Commons Attribution License. www.llifle.com 14 Nov. 2005. 03 Jul 2020. </Encyclopedia/SUCCULENTS/Family/Asclepiadaceae/17384/Stapelia_grandiflora>