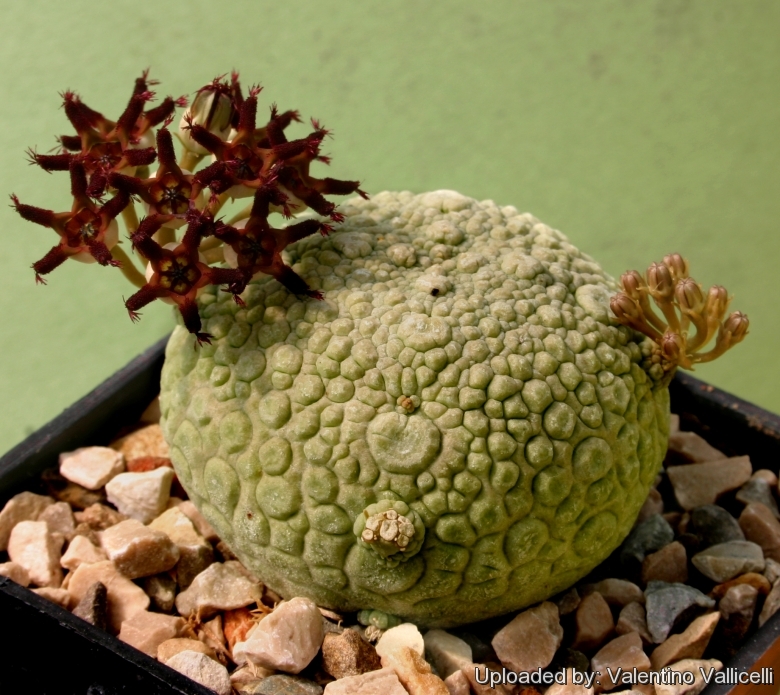 Pseudolithos migiurtinus Photo by: Valentino Vallicelli
Probably the most popular species of the genus in cultivation, it needs protection from cold and damp, but doesn’t like to get bone dry, even in winter.

Origin and Habitat: From the North East of Somalia
Habitat: This plant has been found in grit in a dry tropical environment with lots of sun. These plants, like most of the succulent milkweeds (stapeliads), are generally fly pollinated, and conveniently smell like rotten meat or some type of manure.

Description: Habit: Usually single stemmed. Quite variable in shape, colour and size.
Stem: Up to six centimetres in diameter and eight centimetres in height (an old plant in cultivation may achieve a bigger size) The stem is oval and tuberculate, but some plants have an evident four-sided figure form. The colours vary from light green (in shaded environments) to clear olive/grey/green (in half sun) or reddish-brown (in full sun).
Roots: Fibrous.
Flower: The cluster of flowers is fly pollinated and smells like rotten meat. The flowers are dark red and about 5/7 mm across.
Fruit: Seed pods contain about 15-20 seeds each.
Phenology: Blossoming time: mainly during the end of the summer on the bottom side of the plants, but it is not strange to see some flowers almost year round in a heated greenhouse.

Subspecies, varieties, forms and cultivars of plants belonging to the Pseudolithos migiurtinus group

Notes: This plant has been successfully crossed with diverse Pseudolithos species and other Asclepiadaceae too. These hybridizations give rise to some very interesting cultivars. 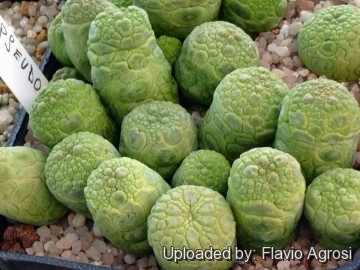 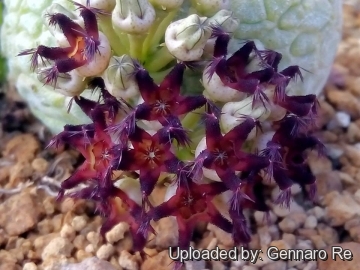 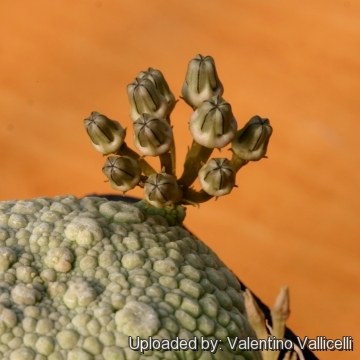 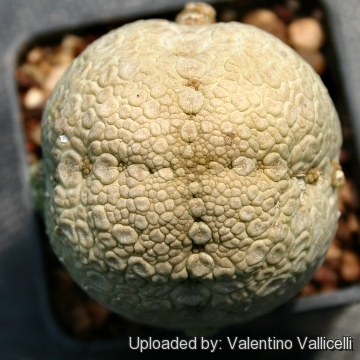 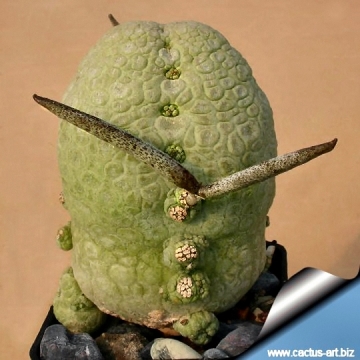 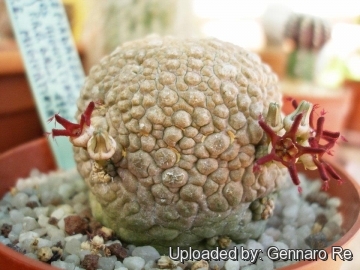 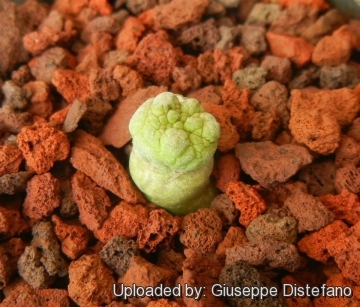 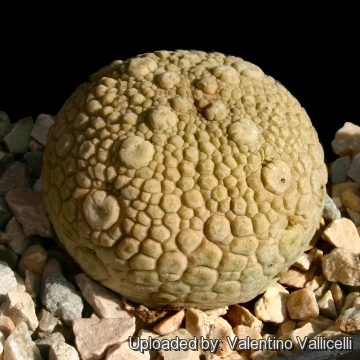 Cultivation and Propagation: Relatively easy to grow, but mistakes are costly. If rot sets in, there is practically no time, nor warning, before the plant turns to expensive mush.
It needs regular watering, especially during the hottest summer days; provide also some light watering if the green house temperatures in winter are elevated. Either excessive or very scarce watering can induce rot.
Frost Tolerance: Winter temperatures must be kept over 10° C. (But it can withstand winter night-time temperatures down to about 5°).
Sun Exposure: It has a great advantage if grown in very strong light, but sheltered from full sun.
Cultural Practices: Provide very good ventilation. It grows quite easily and fast on its own roots. It is not difficult as commonly supposed, but inaccuracies are fatal. If rot starts, the plant will almost inevitably die. This plant is a candidate for under-potting, as long as you keep it watered.
Propagation: Seeds are the only way of reproducing.

by Valentino Vallicelli
There are a total of 21 Photos.
Click here to view them all!
Cite this page: "Pseudolithos migiurtinus" Text available under a CC-BY-SA Creative Commons Attribution License. www.llifle.com 14 Nov. 2005. 27 Feb 2021. </Encyclopedia/SUCCULENTS/Family/Asclepiadaceae/12758/Pseudolithos_migiurtinus>