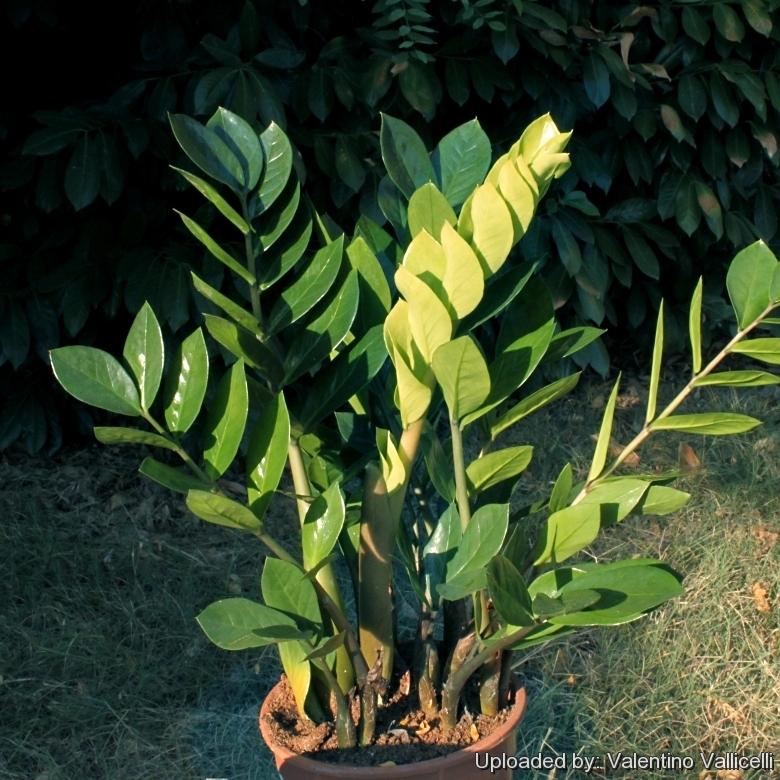 Origin and Habitat: Tropical and southern subtropical Africa (Kenya, Tanzania to Natal and Zanzibar).
Habitat: It grows on moist forest and savannas, seasonally dormant or evergreen.

Description: Zamioculcas zamiifolia the ZZ plant is an odd monotypic genus that, like Aglaonema and Dieffenbachia, is a member of aroid family. However it bears little resemblance to any other members of the aroids and is somewhat similar to the cardboard palm (Zamia furfuracea). Dutch nurseries started wide-scale commercial propagation of the plant around 1996 and is becoming a popular foliage plant. In china it is grown as an auspicious plant (also called the money tree) and is mostly sold for decoration during the lunar new year.
Habit: It is an acaulescent, perennial herb, from a stout succulent rhizome. It is normally evergreen, but becomes deciduous during drought, surviving drought due to the rhizome that stores water until rainfall resumes. The average height of most of the plants is about 40 to 70 cm, and the plant may have a wide spread of 50 to 100 cm. Larger plants will have a 90 to 150 cm overall spread.
Rhizome: Short, sympodial, potato-like, very thick, fleshy and underground.
Leaves: Few to several, once-pinnate 45-60(-80) cm tall, with 6-8 pairs of leaflets. Petiole thickened basally, geniculate distally; leaf blade pinnately compound, leaflets oblong-elliptic, thick, 8-15 cm long, smooth, dark green, naturally glossy so shiny that the plant appears to have been polished and deciduous in time of drought. In the dry season the leaflets fall and the stalks wither, leaving swollen bases to tide the plant over to the next rains. The leaves are capable of rooting to form new plants.
Inflorescences: The flowers are produced in 1 or 2 small bright yellow to brown or bronze spadix 5-7 cm long, partly hidden among the leaf bases. Peduncle short; male flowers: filaments free, thecae introrse; sterile flowers: with 4 tepals surrounding clavate pistillode; female flowers: staminodes absent.
Blooming season: Flowering is from mid summer to early autumn.
Fruit: Berry 1-2-seeded, white.
Seed: Ellipsoid.
Chromosome number: 2n = 34. 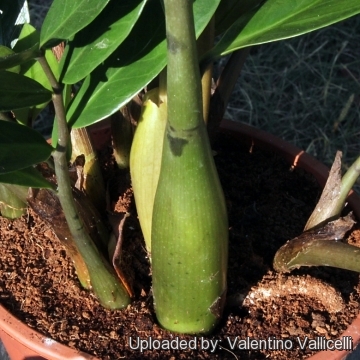 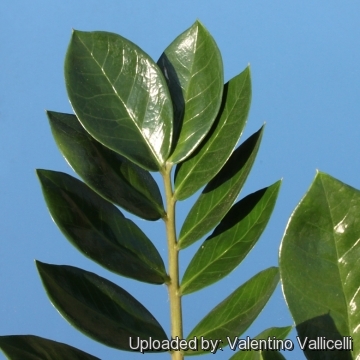 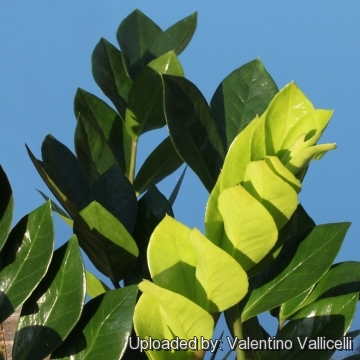 Zamioculcas zamiifolia Photo by: Valentino Vallicelli
Send a photo of this plant.

Cultivation and Propagation: Zamioculcas zamiifolia ('ZZ' plant ) is grown as an ornamental plant, mainly for its attractive glossy foliage, because of its unique appearance, ability to tolerate low light levels and drought, and resistance to diseases and pests, 'ZZ' is emerging as an important foliage plant for interiorscaping.
Growth rate: ZZ grows slowly even under the most ideal conditions. But most plants will produce new and better growth after a period of dormant inactivity.
Soil: Use a lime free soil that retains water yet drains well like 70-80% sphagnum peat, and pine bark, and 20-30% perlite, vermiculite and pumice.
Pots: Always use a pot with a hole and provide a good drainage. Pot sizes should be increased as the plants grow to provide room for the increased number and size of rhizomes.
Watering: Drench the soil and let it become moderately dry between waterings when it is in growth, while during the winter or dormant season must be kept very much on the dry side. Perpetually wet soil may result in rotting of the tuber, while dry conditions will usually induce premature dormancy. Erring on the side of dryness is preferable to risking tuber rot. The drought tolerance is probably due to its waxy and shiny leaves and fleshy stems, which have extremely low rates of transpiration, and its thick rhizomes, which store water.
Fertilization: Need a regular light fertilization during growing season including all micro nutrients and trace elements or slow release fertilizer at the rate of 1/4 the dose indicated in the label.
Hardiness: It is a tropical plant that can be kept outdoors as long as the temperature does not fall below around 15 °C, best growth is between 18 °C to 26 °C . Hot temperatures give an increase of leaf production. In temperate regions, it is grown as a houseplant.
Exposures: Bright, indirect light is best for Zamioculcas, although it will tolerate very low light. Some sun will be tolerated, very early in the morning. 'ZZ' is more tolerant of low light levels than other foliage plants, such as Snake Plant (Sansevieria trifasciata) and Cast-iron Plant (Aspidistra elatior) and can be grown eventually under bright fluorescent lights or in a greenhouse and many tolerate windowsill conditions if humidity can be kept up and bright light provided without too much direct sun.
Uses: Plants can be placed on office desks, table tops or placed on the floor, even in corners where light levels are low.
Pest & diseases: Few diseases or pests and physiological disorders have been found on this plant in production and interiorscapes.
Maintenance: Do not use leaf shiners.
Warning: All parts of the plant are poisonous if ingested.
Propagation: Propagation is vegetative using leaf cuttings or division. Single leaflets can be inserted into trays filled with a potting medium. Keep the medium moist in a shaded greenhouse. In the home typically, the lower ends of detached leaves are inserted into a moist gritty compost and the pot enclosed in a polythene bag. Though the leaves may well decay, succulent bulb-like structures should form in the compost and these may be potted up to produce new plants. For division of larger clumps, the tuber-like rhizomes can be separated and potted.