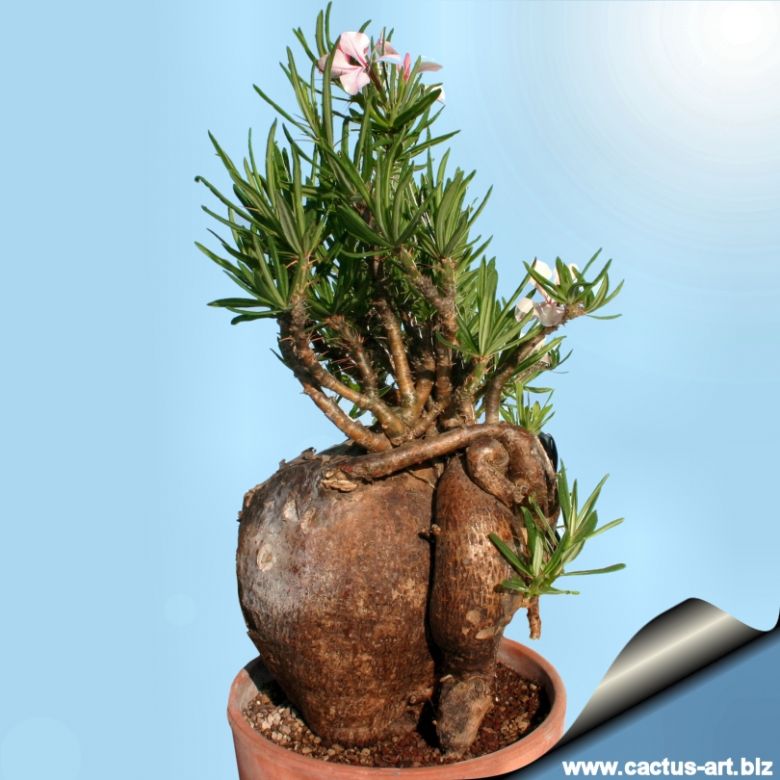 Pachypodium succulentum Photo by: Cactus Art
It is an unusual slow-growing caudiciform succulent and one the most floriferous of all pachypodiums species in cultivation.

Origin and Habitat: Endemic to South Africa (southern, central, eastern and northern Cape Province and in western Orange Free State). It is estimated to have an extensive range (over 300,000 km2 ) and it is common or very common in at least parts of its range.
Habitat: It is found in arid places, usually among rocks in grassland, associated with succulent scrub vegetation at altitudes of 15-1400 metres above sea level. Unlike other South African species of Pachypodium, Pachypodium succulentum is resistant to frost and sometime withstand temperatures of -10° C in winter. It is naturally well adapted to the hot and dry environment in which it grow. The succulent stems act as water stores, and enable the plant to survive the harshest conditions. The thick tuberous underground stem also help the plant to survive long periods without water. It can therefore withstand intense heat and long periods of drought.

Description: Pachypodium succulentum is a slow-growing caudiciform succulent shrublet with a large half-submerged tuberous base bearing several slender branches more or less armed below the leaves with with slender acute stipular spines. The flowers which appears with the leaves are crimson, pink, or (rarely) white, with a darker midstripe. The plant can grow up to 60-200 cm of height.
Stem: The stem forms a basal turnip-shaped and succulent caudex 20-50 cm long, 10-15(-25) cm in diameter rising about 15 cm above the ground, that bears several twisting, usually erect slender branches, simple or sparingly branched, usually about 15-60 cm long, 6-20 mm in diameter at the base and tapering gradually and a few easy to avoid spines. The young stems are grey tomentellous, the older stems are covered with a thin smooth wrinkled brownish bark.
Leaves: The leaves are sessile, produced both on long shoots and in sessile fascicles (short shoots), the latter from the axils of the former. They are linear or oblong-linear, narrowed to the base, obtuse or (rarely) acute, with recurved margins, hairy on both surfaces 17-45 mm long, 2-8(-10) mm wide, quite firm, nearly leathery, green and pubescent above, pale and densely tomentose below. The stipules are 3 (1 intrapetiolar), spiny, the lateral 2 of the long shoots spreading, 2-27 mm long, 0.5-2 mm in diameter,the intrapetiolar shorter and erect, all three rising from a conspicuous decurrent leaf-cushion around the base of the leaf with a depression in the centre after the leaf has shed, those of the short shoots shorter, rapidly decreasing towards the base of the shoots. The leaves immediatelly distinguish this species from the other broad leaved Pachypodiums, with the exception of Pachypodium bispinosum. This species is not as deciduous than most Pachypodiums, and will generally not lose all its leaves in winter.
Flowers: The flowers are produced in few-flowered, sessile, contracted, finely tomentose terminal cymes. The bracts are subulate or lanceolate, small, early deciduous. The pedicels are (6-)8-10(-12) mm long, pubescent. The flowers appears with the leaves. The calyx is 3.5-8 mm long, finely tomentose. The sepals are narrow-lanceolate, acuminate. The corolla tube is cylindrical, pubescent throughout, purple, slender 10-80 mm long (infra-staminal part 4-6 mm long, with 5 hairy ridges below the stamens, supra-staminal very slightly wider, 8-12 long). The corolla is salver-shaped, more than 2.5 cm wide with spreading petals 8-10 mm long. The lobes are crimson or shades of pink, or (rarely) white, with a darker midstripe and purple (the outer half), oblong, contracted into a distinct claw at the base, (8-)12-18(-20) mm long, and 5-8 mm broad, obtuse. The stamens are included, the anthers are 4-5 mm long sessile or with very short filaments sagittate adhering to the oblong stigma. The disc is replaced by 5 distinct glands, and much shorter than the ovary. The ovaries are two uniting above in the erect filiform style.
Blooming season: August to December.
Fruits (follicles): Spindle-shaped, long acuminate, over 5 cm long and 5-10 mm in diameter, tapering at each end.
Seeds: It produces numerous ovoid, compressed, seeds 5 mm long with an apical coma of whitish hairs 2 cm long, although specialised pollinators are required to produce a good seed set.


Pachypodium succulentum is a variable species which has been described several times under different names now considered synonyms. The early described Pachypodium griquense and Pachypodium jasminiflorum are respectively the smallest flowered and the white blooming forms. Neither of these forms is distinguishable from P. succulentum in essential characters of floral or vegetative structure.

Subspecies, varieties, forms and cultivars of plants belonging to the Pachypodium succulentum group

Notes: Pachipodium succulentum can be confused with the sympatric Pachypodium bispinosum when not flowering. In fact the spiny branches of both sprout from a proportionally huge cauduciform taproot but flowers and flowering times are different, and the two species do not hybridize in habitat. 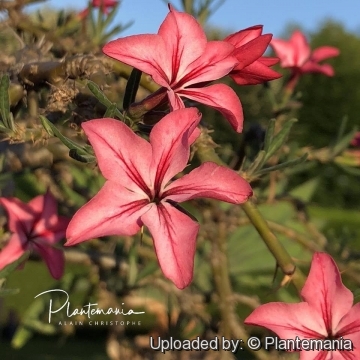 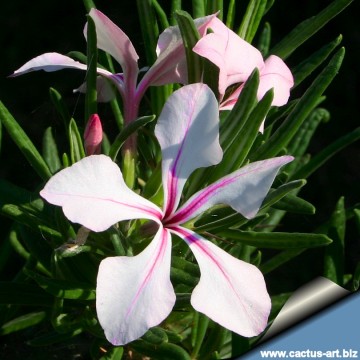 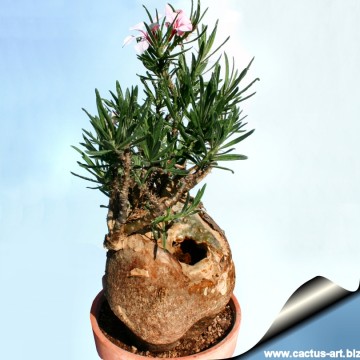 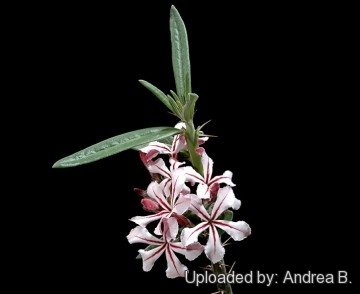 Pachypodium succulentum Photo by: Andrea B. 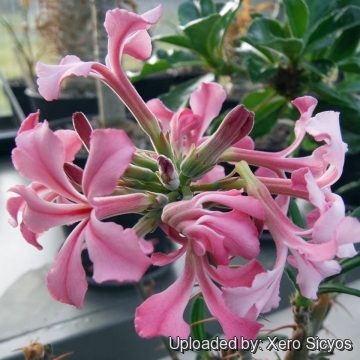 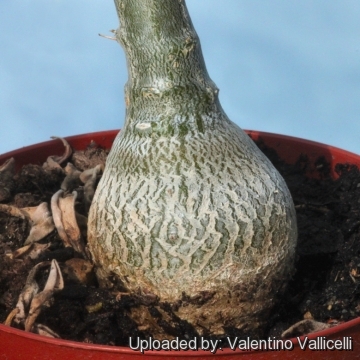 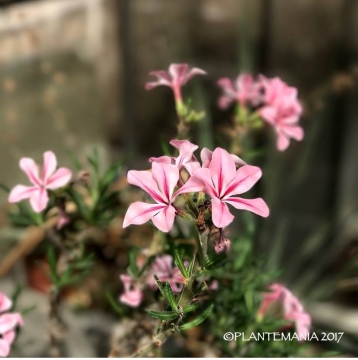 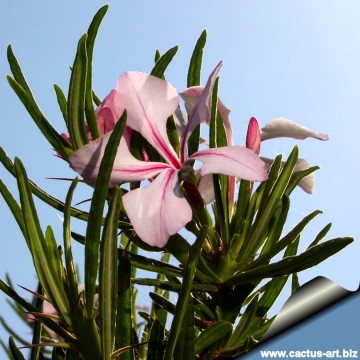 Cultivation and Propagation: These plants seem to be particularly prone to rot if allowed to get too wet in winter, or if cultivated under less than ideal conditions and care. Water abundantly in summer and give extra well-drained soil to avoid waterlogged conditions. No water from November to March. The watering program will change, depending on temperatures and stage of growth, but it is best not to let this plant dry out completely for any length of time. It is sensitive to cold, and should be kept totally dry in winter, at or around 4°C. Protect from frost. It tends to lose its leaves and go dormant in winter. It likes full sun to light shade . It develops a great, succulent root system that you could raise up yearly and it would look better and better.
Reproduction: This species is easy to grow from seed or cuttings. It is easy to root from root cuttings. A piece of root is removed, and immediately replanted, with about 1 cm sticking out above the top dressing. Within a few days to a few months, new leaves will start to form at the tip, shortly followed by new branches and a new caudex. Stem cuttings can also be rooted, though with more difficulty.