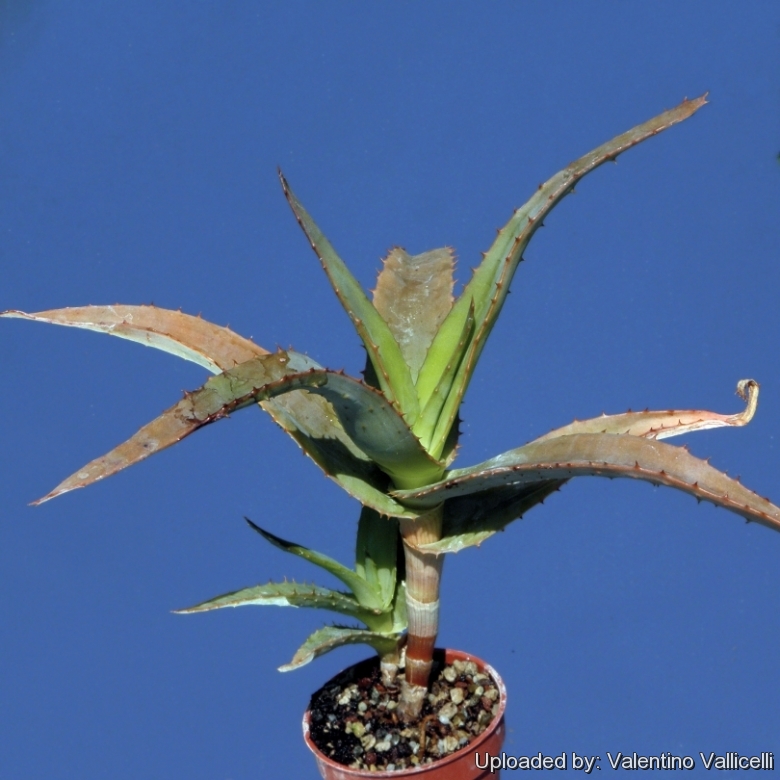 Origin and Habitat: KwaZulu-Natal and the Eastern Cape coastline of South Africa ( Natal. From Port Edward in the south to Umhlanga Rocks in the north)
Altitude: From sea level to about 120 elevation.
Habitat: These plants are naturally found in dune vegetation along the coast in a very narrow strip, never more than a few hundred metres from the sea. They are always found in groups in the coastal thicket, often as part of the ground layer or sometime in clearings and rocky places. Flowers attract many bees and birds. Other succulent sand dune specialists are Carpobrotus dimidiatus.

Description: Aloe thraskii is a majestic, usually single-stemmed arborescent aloes that will in time bear a massive rosette of beautifully recurved leaves. It is among the tallest aloe species usually 2 m high but sometimes up to 4 m and produces showy yellow candle-like spikes of flowers. Aloe thraskii is closely related to Aloe excelsa and Aloe rupestris but is distinguished from both by its strongly recurved leaves. It can also be confused with Aloe vanballenii when young, and Aloes angelica and Aloes alooides as mature plant. Flowers look different, though.
Stem: Single, robust, unbranched, grey-brown with persisting dry leaves.
Rosette: Dense, with numerous leaves
Leaves: Up to 160 cm long and 22 cm wide, broadly lanceolate, channelled (deeply U-shaped in cross- section), curving strongly downwards, pale olive-green, dull green to greyish-green or glaucous, sometimes with a few spines on both the upper and lower surfaces . Margins armed with reddish prickles maturing from initial white teeth on young leaves recurved back to the trunk about 2 mm long, 10-20mm apart.
Inflorescences: Racemose 50-80 cm tall, dense, erect with 4 to 8 branches. Younger plants may only produce a single inflorescences while older ones can produce 3 to 4 inflorescences with 15 to 25 upright broadly-cylindrical erect racemes. Individual racemes densely flowered to 25 cm long, tapering slightly towards the apex .
Flowers: bright yellow or Yellow-orange. Pedicels, green 1-2 mm long. Subtending bracts about 9 mm long. Perianth cylindrical 2,5-3 cm long, pale yellow, the outer lobes free for most of their length with orange anthers, giving the flower a bicolored look. Anthers and style protruding 1,5-2 cm.
Blooming season: Mid winter. 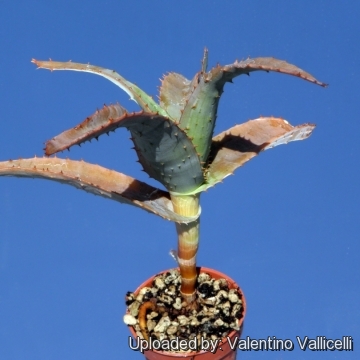 Aloe thraskii Photo by: Valentino Vallicelli
Send a photo of this plant.

Cultivation and Propagation: It is an imposing succulent easy to cultivate under a wide variety of climatic conditions provided it is planted in a well-drained situation given adequate water but not over-watered. Although it originates in the mild, sub tropical eastern seaboard of South Africa this species will grow well in any garden near the sea. It is also a great choice for a hillside garden as roots are very tenacious. It tolerates water in cold winters, too, in well draining soil.
Growth rate: It is pretty fast grower and appreciates a lot of water in warmer weather. Even young plants grow fairly quickly in the garden or in good sized pot.
Soil: Well-de-composed compost addition to well draining sandy-gritty mix creating a rich soil is advantageous.
Watering: Water aloes more than other succulents, keeping in mind that the pots dry out between watering. Keep dry in winter or when night temperatures remain below 10° C. Water it less than average if in bigger pots. Outdoors it grows to astonishing proportions also in areas with wet winters, so don't be afraid to plant this in a high-rainfall area. They are really not very demanding and regular watering in their growing season creates healthy disease resistant plants that will flower better.
Special need: Provide very good ventilation. Nearly all problems occur as a result of overwatering and poor ventilation, especially when weather conditions are dull and cool or very humid.
Fertilization: Light fertilizer seems to boost its growth whenever additional water is given. Feed it during the growing season with a fertilizer specifically formulated for cactus and succulents (high potash fertilizer with a dilute low nitrogen), including all micro nutrients and trace elements diluted to ½ the strength recommended on the label. It thrive in poor soils and needs a limited supplies of fertilizer to avoid the plant developing excess vegetation, which is easily attacked by fungal diseases.
Exposure: It will do its best in full sun and become stressed with inadequate light which could result in poor growth and unnatural shape. Will handle very harsh sunlight, sometimes taking on a coppery leaf sheen, a sign generally associated with stress.
Hardiness: Aloe thraskii is a hardy aloe but not completely frost resistant. It will survive light frost but the flowers will not, but for safe cultivation it is best to avoid freezing temperatures. USDA Zone 9.
Pest and diseases: Occasionally these plants are infested by scale and aphids, but all known garden pests can be kept to a minimum by simply ensuring optimal growing conditions and healthy plants.
Use: It can be also cultivated outdoors in raised beds and terraces and is one of the aloes that can form a centre piece in a garden or grouped, creating a magnificent backdrop, if you have the space, to provide form and texture. It do well in big pots as well.
Maintenance: Removal of old flower stalks. During the winter months, the plants should be grown cool to initiate flower development (about 10°C )
Propagation: Aloe thraskii does not produce suckers but can be propagated by seed and planting of the tops of old plants. Sow seed in a well drained medium in shallow trays and cover lightly with sand or the seed will blow away. Once the seeds begin to germinate, keep moist but watch out for overwatering as the seedlings could rot. Transplant into small pots once they are about 3-4cm high (approximately 6 months) using a sandy loam medium and feed with organic fertilizer at least once a quarter to ensure healthy growth. Plant regeneration (micropropagation) from root and embryo tissue is successful as well.