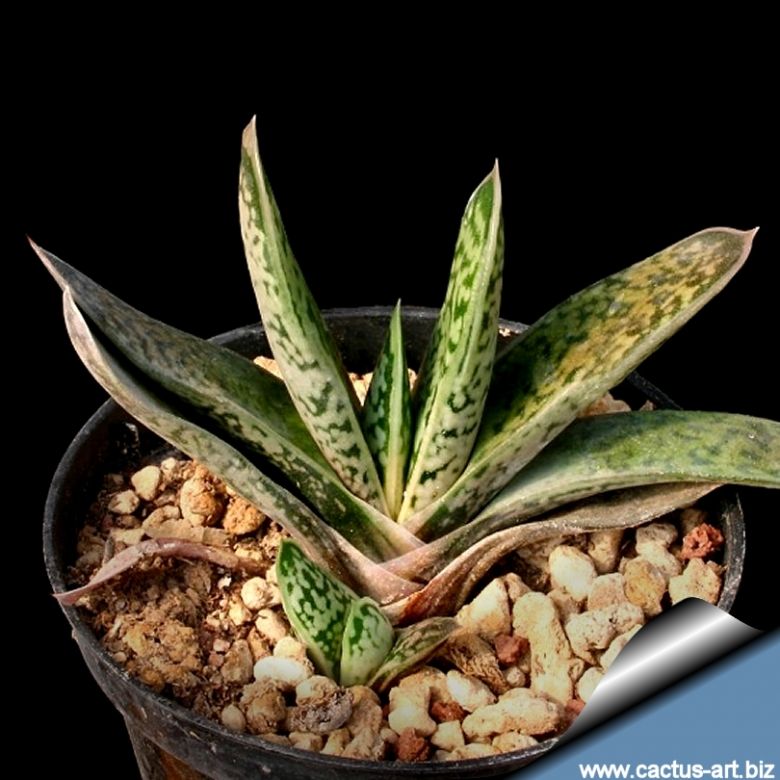 Aloe lingua (Gasteria bicolor) Photo by: Cactus Art
Gasteria bicolour is typically distinguished, with age, by its short stem, which separates it from other acaulescent species, it that can get tall as leaves keep stacking on themselves.

Origin and Habitat: South Africa. This species has a large area of distribution in the Eastern Cape from Humansdorp eastwards, and northwards to pearston, and although it overlaps other species' ranges no hybrids have been reported.
Habitat: Gasteria bicolor occurs in a wide range of habitats mainly in summer rainfall regions. It grows on shallow soil in the shade of other plants. Their speckled appearance, make them difficult to detect in the mottled shade of the bushes under which they are found, thus giving them some protection from grazers, but not necessarily from being trampled. Nevertheless, if they are disturbed, grazed or trampled, their brittle leaves will break and the parts broken off will spontaneously root on the ground. They have thus become very well adapted to 'bad handling', so well in fact that it even appears to be beneficial to the plant in that it generates young and vigorous plants and increases the population.

Description: Introduced into cultivation about 1825 Gasteria bicolor is a very distinct species that forms long, leafy stems instead of basal rosettes. Decumbent to erect it branches profusely from the base to form small groups and can grow up to 50-70 cm tall and 1 m in diameter with a short leafy stem. The leaves of young plants are distichous (arranged in two opposite ranks) and look quite different to the adult leaves. It is extremely variable and several varieties and cultivars are known.
Stems: Stems become elongated 5 to 20 cm long, they are relatively untidy and often with age lean on a side
Leaves: 12–20, distichous or spirally rosulate, almost linear or lorate (tongue shaped) and broad at the middle, erect spreading, 7 to 25(-40) cm long (depending on clone) by about (1,5-)2.5-3,5(-6) cm wide, smooth or (rarely) slightly asperulous, shiny dark green or glaucous green, with no spots except a few on the back towards the base or heavily mottled with cream spots arranged in obscure transverse lines. The leaves may be slightly falcate and twisted sideways when distichous, or with an asymmetrical keel when spirally arranged or without a keel. They are deltoid-cuspidate at the apex, very rigid, very thick, a slightly convex on the face in the lower half, more so on the back. Margins entire, cartilaginous, slightly serrulate, often red at the clasping base. Leaves may turn red if plant is stressed.
Inflorescence. Peduncle simple or branched (paniculate), and very tall (30 to 150 cm hight); raceme lax, above 30 cm long. Pedicels 12-18 mm long; bracts small, lanceolate.
Flowers: Small about 15-20 mm long, much curved, pendulous, tubular, to globose bicoloured reddish-pink and green that look like little stomachs, ball oblong, 4 mm in diameter. They are rich in nectar and are pollinated by various sunbirds.
Blooming Time: Flowers can be produced any time of year, peaking in midwinter to spring.
Fruits: The seed capsule is 12-14 mm long and contains small, black seeds 2-3 mm in diameter, with a wing for wind dispersal.
Remarks: The plant in habitat from one end of the spectrum to the other, are usually spiral or rosulate in habit, excepting an outlier group of local populations north of the Zuurberg range which are distichous. Cultivated plant usually are distichous leaved.

Subspecies, varieties, forms and cultivars of plants belonging to the Gasteria bicolor group/complex

This Taxon has lots of synonyms ( like many other Gasterias) whit several controversial varieties and subspecies and comprises a multitude of different forms, but where each form is linked to others by populations of plants with intermediate characteristics. 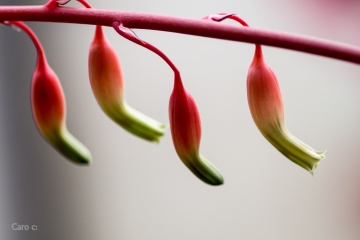 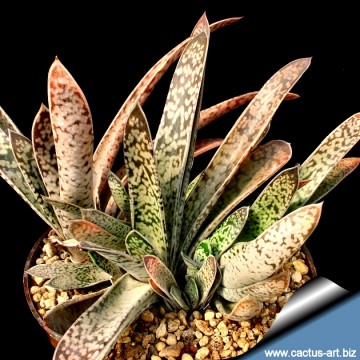 Cultivation and Propagation: They are slow growing but long-lived plants of easy culture which makes them a good houseplant and can be an excellent subject for the beginning gasteriaphile (it can grow easily on window sills, verandas and in miniature succulent gardens where they are happy to share their habitat with other smaller succulent plants, or in outdoor rockeries) Need light shade to shade, but will take full sun part of the day. (with some sun exposure the leaf develops a nice reddish tint and remain compact) They are tolerant of a wide range of soils and habitats, but prefer a very porous potting mix to increase drainage. During the hot summer months, the soil should be kept moist but not overly wet. The plants are fertilized only once during the growing season with a balanced fertilizer diluted to ½ the recommended strength. During the winter months, water only when the soil becomes completely dry. Frost hardy to -1°C (Or less).
Propagation: Gasteria is easily propagated by the removal of offshoots or by leaf cuttings in spring or summer. To propagate by leaf cuttings, remove a leaf and let it lie for about one month (e.g. in a cool window sill), giving the wound time to heal. Then lay the leaf on its side with the basal part buried in the soil. This leaf should root within a month or two, and small plants will form at the leaf base. Young plants can be harvested the following season. They can also grown from seed. Seed should be sown during summer in sandy well drained soil and preferably protected from full sun. The seedlings are slow growing and can be planted out in small containers when they are large enough to handle. The soil should preferably be enriched with compost. They react very well to a liquid organic fertilizer.
Uses: Used in South Africa for various traditional medicines. They thrive in cultivation both indoor and outdoors, used as a potted plants or outdoor rockeries, tolerant of a wide range os soils and habitats.