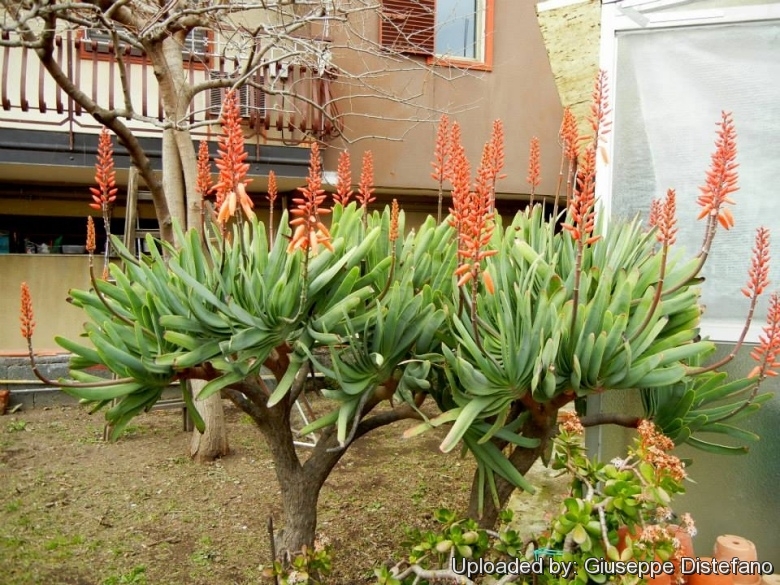 Origin and Habitat: It is endemic to a few mountains in the Fynbos ecoregion between the town of Franschhoek and Elandskloof, Western Cape, South Africa South (Extent of occurrence 1800 km²)
Altitude: 150-650 metres above sea level.
Habitat: It is scattered in seventeen different populations and they can be fairly large, consisting of up to 500 mature individuals. It grows mostly on sandstone, and is often found on sandstone screes overlying granite in well-drained, sandy, slightly acidic soil on very steep, rocky, south-facing slopes that are protected from fire. The climate is Mediterranean with dry hot summers and cold wet winters. Other succulent plants found in this area comprises: Aloe commixta, and the rare sister species Aloe haemanthifolia. Invasive alien species, both due to escaping pine seedlings and other local invasives such as Australian acacias are present within the habitat, but these are either at too low densities to be causing any threat.

Description: Kumara plicatilis, best know as Aloe plicatilis, is a very distinct shrub-sized fan aloe with an incredibly architectural form. It is unique in appearance and looks like nothing else on earth. It's not similar to any other aloe and can take the form of a large bonsai with unusual and striking fan-like arrangement of its leaves. To the imaginative, the leaf-heads look a bit like a mass of grey hands, raised in the air.
Habit: It forms large multi-branched bush or, unusually for Aloe species, a small bonsai-like tree that grows slowly to a height and spread of 1 to 5 meters, but rarely reaches more than 2 m high in cultivation, and spreads somewhat wider.
Stem: Strong, sprawling with ends ascending branched dichotomously at short intervals, each growing point divides and keeps on subdividing, eventually creating a broad domed crown of leaf fans. The trunk has dun-brown papery skin and a corky, fire-resistant bark.
Rosettes: Dense, distichous, with leaves placed in a double row lying over each other and forming a flattened 'fan'
Leaves: 20-30 cm long, 4 cm wide, tongue shaped, linear or oblong-linear, compressed, pliable and ending obtusely rounded, sea green, glaucous, sometimes white-spotted. Margins entire with tiny teeth that are noticeable only on close inspection.
Inflorescence: Simple racemes up to 50-60 cm tall, flower-stalks, slender, about 1 cm in diameter, bracts about 8 mm long.
Flowers: Pendulous cylindrical 4,5-5,5 cm long orange-red to scarlet. the outer lobes united for more than half their length. Anthers and style exerted 1-5 mm.
Blooming time: Flowers appear at different times of the year, but mainly in winter.
Fruit: Loculicidal capsules, oval
Remarks: From a distance it may resemble in shape to a smaller Aloe dichotoma for its dichotomous branching habit, but distinguish for the distichous arrangement of its linear leaves and straight perianth with the inner segments free so taxonomists have assigned it to its own separate genus Kumara. 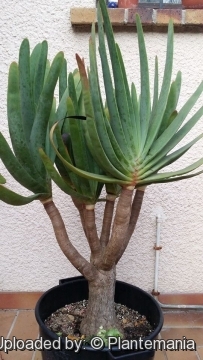 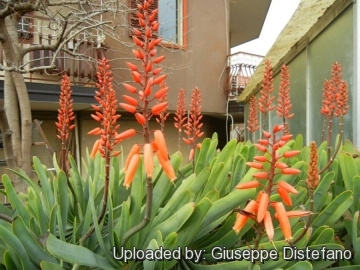 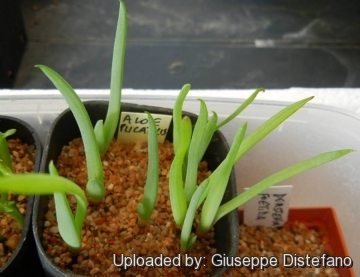 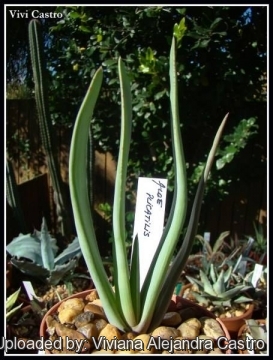 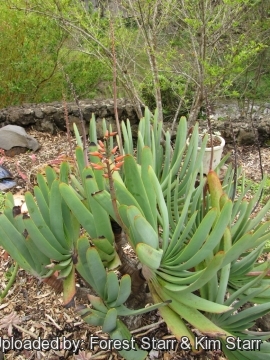 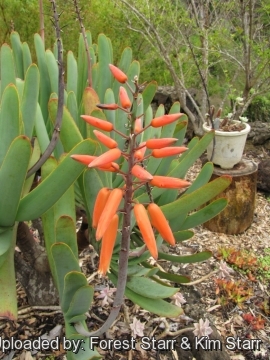 Cultivation and Propagation: Kumara plicatilis (Aloe plicatilis) is an attractive and interesting accent plant to have in a sunny garden. It easy to grow and suited for any well drained soil in full sun. As such it is increasingly used as an ornamental plant for drought tolerant landscaping and rockeries. Winter grower, it is sometimes a tricky grower and prone to rot. It has a very old and almost stressed appearance making this an excellent and sought-after container plant or wonderful landscape specimens in the garden.
Growing rate: It grows slowly, but not agonisingly so – being able to increase its height by 10-20 cm per year under favourable conditions. It is a long lived plant and once established, it will be content in its position and with its soil for years. It is often in danger of being overgrown, smothered and killed by faster growing plants in its vicinity.
Soil: Always use a good quality, loamy sandy soil with plenty of drainage chips at the bottom of containers. It prefers soil of a medium or slightly acidic pH.
Fertilization: It needs a perfect fertilizer diet in summer. Use preferably a cacti and succulents fertilizer with high potassium content including all micro nutrients and trace elements or slow release fertilizer.
Exposure: It can tolerate moderate shade, and a plant that has been growing in shade should be slowly hardened off before placing it in full sun as the plant will be severely scorched if moved too suddenly from shade into sun.
Watering: It tolerates weekly watering in the summer, once a month, or not at all in the colder months of winter. Can withstand long periods of drought, but they will thrive and flower more profusely if watered in the correct season.
Pest & diseases: Incorrect watering, poor drainage or too much shade can lead to attack by pests and diseases. Rot it is only a minor problem with aloes if the plants are watered and “aired” correctly. If they are not, fungicides won't help all that much.
Hardiness: It can take a few degrees of frost in winter as well, but prefers hot summers. It grows much better outdoors in spring and summer.
Gardening and landscaping: In mild climates it can be cultivated outdoors for use in landscaping, preferably planting it in hot and dry rock gardens. It will grow best in regions with a climate close to that of its native deserts – not too cold, and not too wet. It can be grown in large containers too.
Propagation: By seeds planted in autumn, in trays of coarse river sand. Cuttings can also be used for propagation. Cuttings must be dried out for at least 3 weeks before planting in river sand. Growing a mature plant from a seedling or single stem cutting would be a lifetime's work but by good fortune larger cuttings, sometimes known as truncheons with several branches and leaf-rosettes, can be rooted, but this may take several months and success is not always guaranteed.