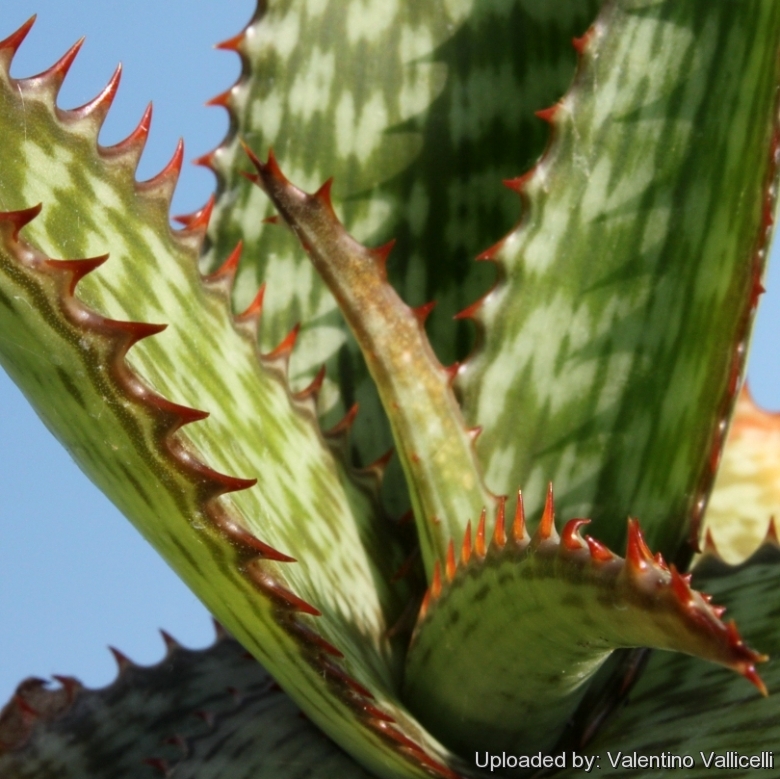 Origin and Habitat: Northern and Central Transvaal including the northern parts of KwaZulu-Natal with the Northern Orange Free State as its southern limit and Swaziland. It is very common in Gauteng.
Habitat: It grows on stony quartzite formation on hills and slopes in the Kalahari thornveld in grassland or in the the shelter of thorny bushes. It is quite common and often forms extensive stands in overgrazed areas, it is not threatened, yet.
Ecology: Pollinators are bees and birds. Seeds are dispersed by wind.
.

Description: Aloe davyana is one of the stemless spotted leaf aloes with a neat compact habit of growth. It is somewhat similar in general appearance to Aloe barbertoniae.
Habit: It forms basal rosettes and grows singularly or in groups of up to 15 plants.
Leaves: Succulent, triangular to lance-shaped, upper surface green and striped above with oblong white spots arranged in more or less distinct bands, lower surface whitish green and usually without spots; Margin armed with sharp brown prickles. In winter, the apical half of the leaf dies back and becomes twisted, leaving the remaining part almost square in shape.
Inflorescence: Several (up to 6) on the same rosette, 50-150 cm high, with up to 6 branches. Racemes well-spaced to densely congested, conical, about 150-200 mm long.
Flowers: Reddish, perianth usually pale pink or red, constricted above the ovary.
Blooming season: It is a mid winter flowering species (June to July in South Africa)

Subspecies, varieties, forms and cultivars of plants belonging to the Aloe greatheadii group

Notes: Aloe davyana is a melliferous plant that produces a light clear nectar and an abundance of orange pollen. 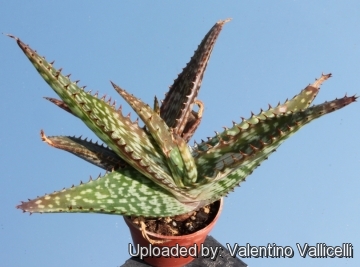 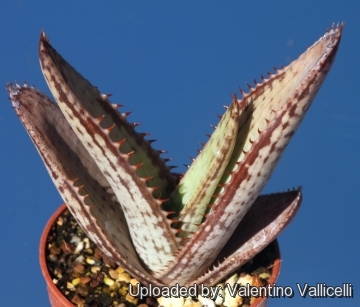 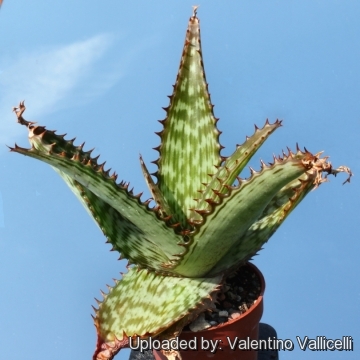 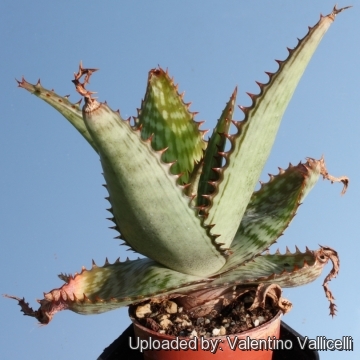 Cultivation and Propagation:
It is easy to cultivate under a wide variety of climatic conditions provided it is planted in a well-drained situation given adequate water but not over-watered. Aloe greatheadii var. davyana makes an excellent garden plant, especially in the drier regions of South Africa. Because the plant is a succulent, it needs very little water and because it is frost resistant, it will survive in extremely cold conditions.
Soil: Grow it in an open sandy-gritty well-drained cactus compost.
Pots: It needs a relatively shallow pot to accommodate its fibrous roots and provide a very good drainage. It may stay in the same pot for many years.
Watering: Water in moderation. Keep dry in winter or when night temperatures remain below 10° C. Water it less than average if in bigger pots.
Special need: Provide very good ventilation. Nearly all problems occur as a result of overwatering and poor ventilation, especially when weather conditions are dull and cool or very humid.
Fertilization: Light fertilizer seems to boost its growth whenever additional water is given.
Feed them during the growing season with a fertilizer specifically formulated for cactus and succulents (high potash fertilizer with a dilute low nitrogen), including all micro nutrients and trace elements diluted to ½ the strength recommended on the label. They thrive in poor soils and need a limited supplies of fertilizer to avoid the plants developing excess vegetation, which is easily attacked by fungal diseases.
Exposure: It enjoys light-shade. It may be grown in full sun too but protect in summer from afternoon sun, and avoid reflected heat. It will do its best with some sun and become stressed with inadequate light which could result in poor growth and unnatural shape. Direct sunlight along with prolonged drought and make the leaves turn a reddish colour, a sign generally associated with stress.
Hardiness: It is very hardy but in cultivation avoid severe freezing temperatures.
Pest and diseases: Occasionally these plants are infested by scale and aphids, but all known garden pests can be kept to a minimum by simply ensuring optimal growing conditions and healthy plants.
Use: This is suited for a non heated green house. It can be also cultivated outdoors in raised beds, terraces if sheltered from winter rain.
Traditional uses: The leaf pulp and the bitter sap are used medicinally for the treatment of wounds, sores and burns. Tswana and Kwena women drink a decoction of Aloe davyana at frequent intervals during pregnancy, probably as a purgative. The Manyika make a gonorrhoea remedy from the leaf pulp mixed with another medicine.
Maintenance: It is a suckering species, and one plant can eventually cover a large area. Divide the crowded clumps periodically. During the winter months, the plants should be grown cool to initiate flower development (about 5-10°C )
Propagation: Propagation is by seed or offsets. Seeds must be sown as fresh as possible. The best time for sowing would be in the late summer before winter sets in when temperatures are still warm. Use coarse, well-drained sandy soil and cover seeds lightly, then keep moist. Cover the seeds with a fine layer of grit and water from below with a with a long-lasting fungicide, as seedlings are prone to damping off, a fungus that eventually kills the young plants. For the 1-2 weeks cover the pots with a sheet of glass/clear perspex to keep the humidity levels high. Remove the glass and replace it with light shade-cloth and mist once or twice a day for the next two weeks after which most seeds should have germinated. From then on mistings can be reduced to every second and then every third day as the little plants grow. After germination, when plants are about 20–30 mm high, re-plant seedlings using a sandy loam medium and feed with organic fertilizer at least once a quarter to ensure healthy growth. By cuttings: remove offspring from the parent plant. Place the cuttings in the same mixture one uses for seeds. Use root hormone to stimulate root growth.