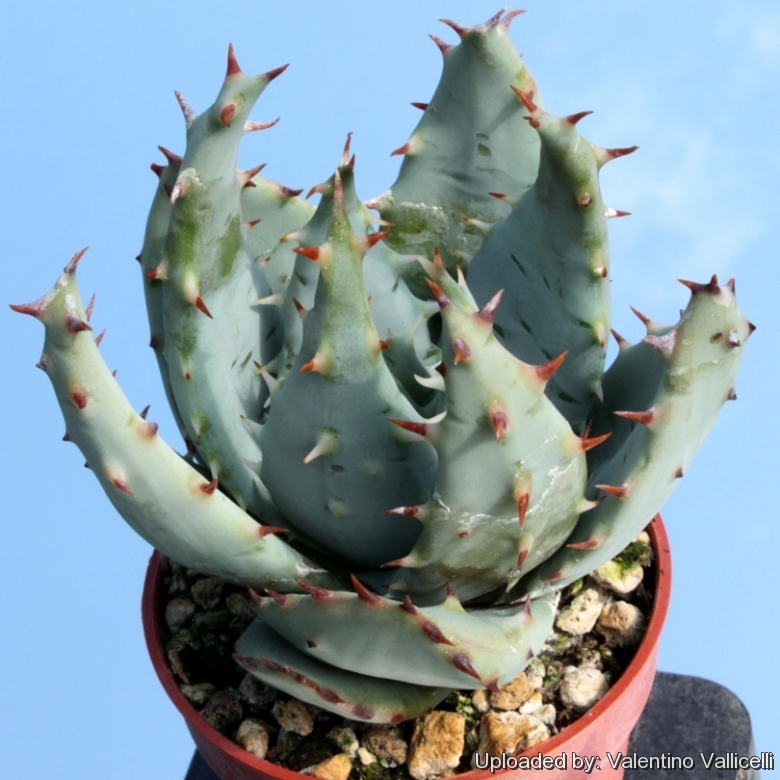 Origin and Habitat: Endemic to the Magaliesberg, from near Pretoria to near Rustenburg in the Western Transvaal, and the northern slopes of the Witwatersberg.
Habitat: Grows naturally in sunny well-drained conditions on high stony mountains and hills on rocky, exposed northern slopes in the summer rainfall area receiving 625 to 750 mm. Plants hardly protrude above the dense grasses with which it is often associated. The flowers are apparently pollinated by birds, bees and wind.

Description: This aloe grows as a solitary rosette with the leaves curving inwards, resulting in a neat, rounded head or rarely form small groups. It is particularly striking with a stunted appearance, and is especially attractive for its dull red flowers in winter. It is one of the most easily recognisable of the aloes even when not in flower, owing to its habit of growth. It is a low growing species with irregular flowering and seed set. It closely resembles Aloe humilis but the leaves are thicker and more rigid. If not watered for a long time, leaves tend to curl in on itself, making it look a bit like an anemone curling into a ball when protecting itself.
Rosette: It forms a compact, almost spherical perfect rosette with overlapping leaves reaching only 300-400 mm in diameter, and 300-400 mm in height.
Stems: Very short or absent.
Leaves: About 30, fleshy, very stiff, chubby, narrowly ovate-lanceolate, triangular, arcuate, strongly convex on the inner, glaucous, greyish-green or reddish-green with a particularly rough surface with pronounced papillae, without spots and sharp-tipped. The leaf margins of new growth have whitish spines as opposed to the reddish brown spines on older leaves. The backs of the leaves have spines on the medial line near the leaf tip. Outer leaves 12 cm long, 3 cm broad and 9 mm thick in the middle. As the temperatures drop, the colours of the leaves tend to pinken as is the case in many aloes and other succulents.
Inflorescence: Often has a single cylindrical flower stalk 300-400 mm tall, occasionally forked.
Flowers: The flower buds are dull red with deep-red, almost black filament protruding from the flower tube that give the flowers a characteristic appearance.
Blooming season (Europe and North America): November-February (July and August in south Hemisphere). 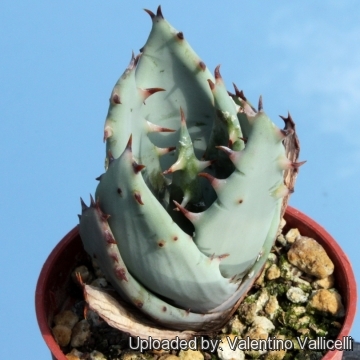 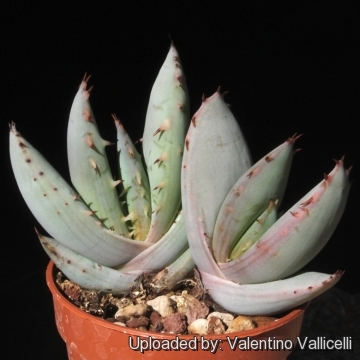 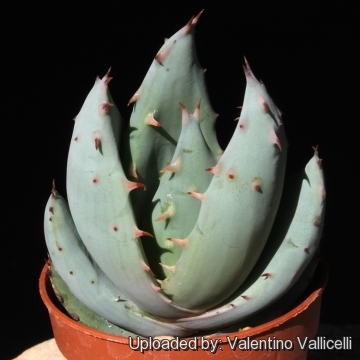 Aloe peglerae Photo by: Valentino Vallicelli
Send a photo of this plant.

Cultivation and Propagation: It is an easy plant that usually does not give many problems in cultivation. Needs light shade to filtered sun, but will redden with more light exposure. Regular water in summer, keep dryer in winter, needs good drainage It grows much better outdoors in spring and summer, it is also perfect for the bright windowsill. Grow it in light, fertile, well-drained, moderate soils, with a slightly acidic pH (5-6). Avoid any frost.
Maintenance: Removal of old flower stalks; It is a suckering species, and one plant can eventually cover a large area. Divide the crowded clumps periodically. During the winter months, the plants should be grown cool to initiate flower development (about 5-10°C )
Propagation: Seeds, division of older plants.