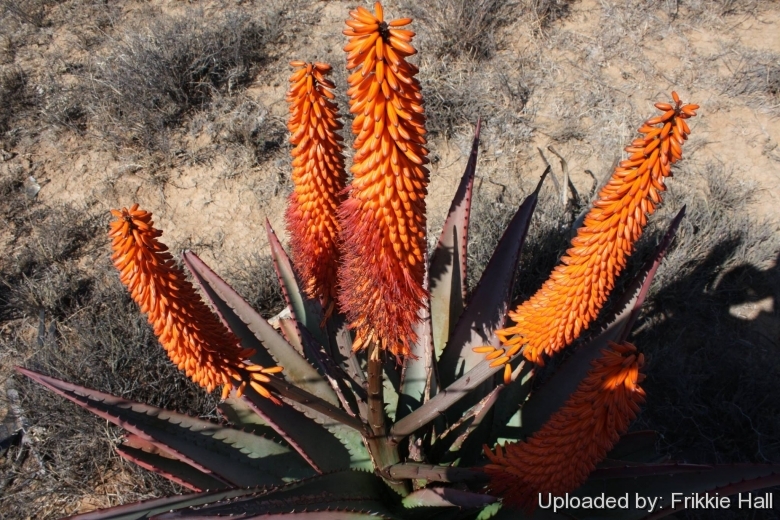 Origin and Habitat: South Africa (Eastern Cape, Free State, KwaZulu-Natal), and extending inland as far as Lesotho. Aloe ferox is widespread and common throughout its range.
Altitude range: Up to 1000 metres above sea level.
Habitat and ecology: Albany Thicket, Fynbos, Grassland, Indian Ocean Coastal Belt. Aloe ferox is one of the dominant species in the 'succulent bushland' vegetation in South Africa. It grows in a wide range of climatic conditions. It is especially abundant on coastal river valley and further inland on rocky outcrops to flat, open areas, arid rocky hillsides and mountain slopes, where mean temperatures range from 27-31°C. Capable of thriving in the arid climate of the western part of the range as well as relatively wet conditions in the eastern part of the range. Annual rainfall ranges from 50-300 mm. Though the root system is shallow, the plant can grow under such dry conditions. Aloe ferox has a stem surrounded with a persistent layer of dead leaves that insulate the stem in the case of bush fires. This species is pollination by birds. However, honey bees also play a role in the pollination. The leaves of this commercially important medicinal plant is extensively harvested and products derived from harvested material are exported. Large volumes have been exported since the 1980s, with an increase in trade over the past 15 years. Despite heavy exploitation in some areas this species is still extremely common and not suspected to be in any danger of extinction. Aloe ferox has a weed-like ecology and is a pioneer species in disturbed vegetation, and therefore land degradation in many areas is suspected to have led to an increase in the population size over the past 30 years.

Description: Aloe ferox is a single stemmed, caulescent, aloe about 2-3 m or taller with the leaves arranged in an apical rosette with dead leaf remains. The leaves can be up to 1 metres long and to 15 cm broad, green, sometimes with reddish tinge and are covered by reddish-to brownish teeth. Young plants tend to be very spiny. Aloe ferox is a very variable species, but Reynolds (1950) did not accept the varieties that have been described. Aloe horrida possibly belong here. Aloe ferox is easily confused with Aloe marlorii, bur the flowers of the later are produced on horizontal branches. This species will also hybridise with any other aloe flowering at the same time and many “Aloe ferox” in cultivation are hybrid.
Stem: Simple or ralely branched above the base, 3-3 metres tall, occasionally reaching a length of 5 m and a diameter of 10-15 cm.
Rosette: with 30–60 leaves, densely aggregated at stems tip. The old leaves remain after they have dried, forming a persistent "petticoat" on the stem which give it a ragged untidy appearance if not removed.
Leaves: Lanceolate, very rigid in texture, the upper face shallowly channelled and the lower convex, pungent at the apex, arcuate-erect to spreading with the leaf tips curving slightly downwards, dull green or grey green, sometimes with a slightly blue look to them and often with a reddish-brown tinge under stress condition. Each leaf can be 50-100 cm long, x 65-150 mm wide. Leaves are furnished with copious reddish to dark brown deltoid-cuspidate prickles 3-6 mm long and 10-20 mm apart along the margins. Surface glabrous or with few to many irregular prickles scattered on the leaf surfaces, especially on the lower surface. Young plants tend to be very spiny. The presence of a thick cuticle, makes leaves well adapted to dry conditions.
Inflorescences: The inflorescence is a single tall candelabra-like branched panicle, with 5-8(-12) branche each bearing an erect cylindrical or narrowly conical dense racemes, carrying a large spike-like head of many flowers 50-80(-100) cm tall, 9-12 cm in diameter narrowing to about 6 cm at tip, very dense bud horizontal. Bracts ovate-acute, 8-10 cm long, 3-6 mm wide, 3-many-nerved.
Flowers: Pedicels 3-8 mm long. Flows are showy, yellow-orange to bright red (rarely yellow or white) with inner petals tipped with white tubular, subclavate or ventricose and about 3 cm long, base rounded, enlarging above. Ovary slightly narrowed at mouth. Tepals free for 22 mm. Stamens and style dark orange to bright red, anthers, protruding from the mouth 9-25 mm. Outer segments connate in lower third, inner segments free but dorsally adnate to outer in lower third. Aloe ferox are pollinated by birds but honey bees also play a role in the pollination. Blooms are self-sterile and only a few ﬂowers per raceme mature simultaneously. The stamens produce pollen in the morning and wither in the afternoon, whereas the style is exerted on the second day of anthesis.
Blooming season: Winter (May to November according to the area), but in colder country this may be delayed until spring.
Fruit: 20-23 x 10-12 mm, yellowish grey-brown, many seeded.
Seeds: Almost black, about 5.0 x 3.0 x 0.6 mm, broadly winged.
Chromosome number: 2n = 14 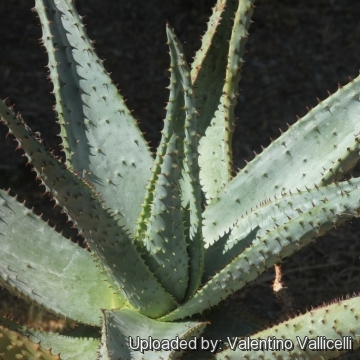 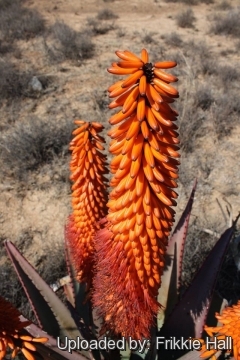 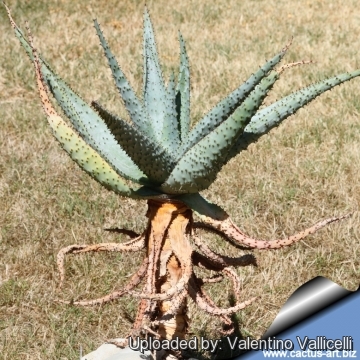 Aloe ferox has a stem surrounded with a persistent layer of dead leaves that insulate the stem in the case of bush fires. Photo by: Valentino Vallicelli 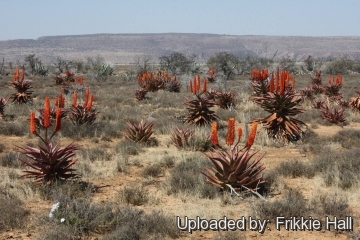 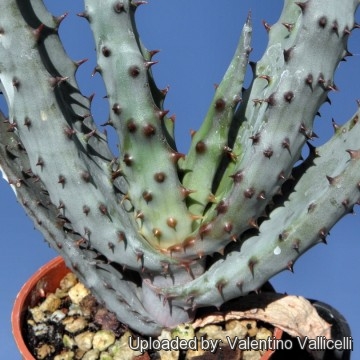 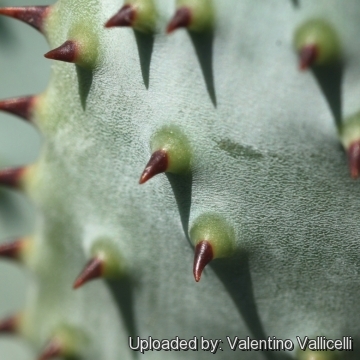 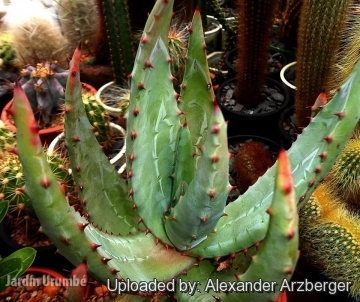 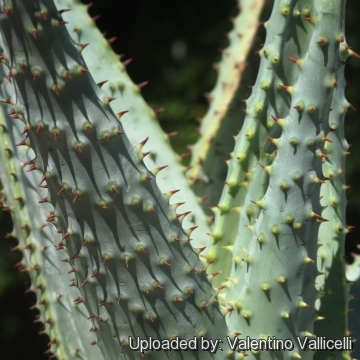 Cultivation and Propagation: Aloe ferox is cultivated widely as an ornamental. It is not a demanding species and usually does not give many problems in cultivation. It can be grown in a cool-warm glasshouse and put outside for the summer. In warm climates it is also an excellent garden specimen plant and is adaptable to many conditions. It grows much better outdoors in spring and summer, it is also perfect for the bright windowsill.
Soil: It is adaptable but prefers rich leaf mould with a slightly acidic pH (5-6). It has large root system and need big pots. Out-of-Doors grow it in light, fertile, well-drained soils.
Light requirements: It needs full sun to filtered sun.
Waterings: It should be soaked and allowed to dry out between waterings in summer. It should be given very light watering in winter too, still allowing the compost to dry out in between. Watorlogging should be always avoided.
Temperature requirements: Avoid any frost (but tolerates -2 degrees C if very dry).
Maintenance: Removal of old flower stalks. During the winter months, the plants should be grown cool to initiate flower development (about 5-10°C )
Propagation: Aloe ferox does not produce suckers but can be propagated by seed and planting of the tops of old plants. Sow seed in a well drained medium in shallow trays and cover lightly with sand or the seed will blow away. Once the seeds begin to germinate, keep moist but watch out for overwatering as the seedlings could rot. Transplant into small pots once they are about 3-4cm high (approximately 6 months). Plant regeneration (micropropagation) from root and embryo tissue is successful as well.