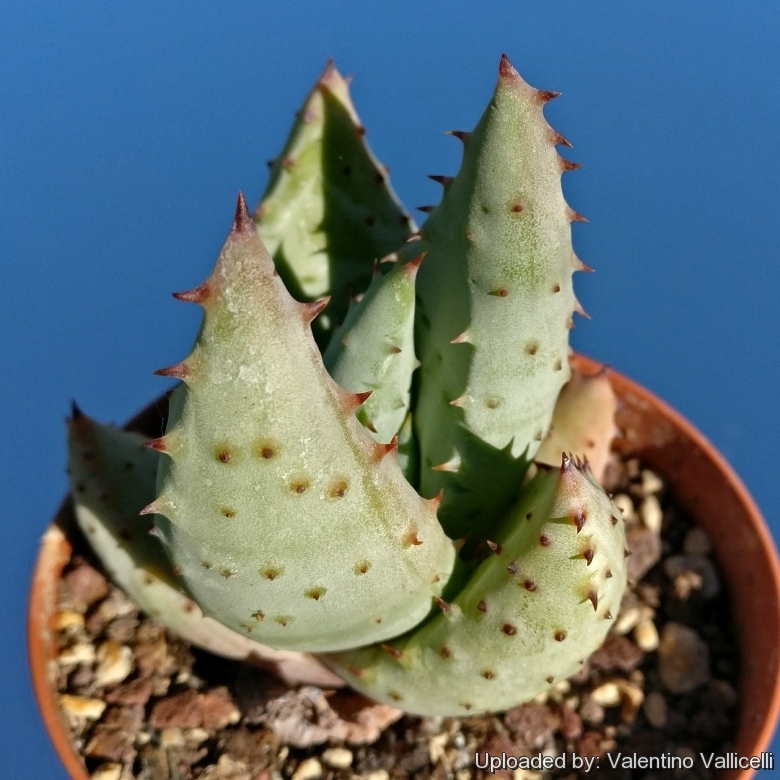 Origin and Habitat: Aloe reitzii is restricted to a small area stretching from Gauteng to Belfast area, district of Mpumalanga in northern KwaZulu-Natal, South Africa and occurs nowhere else in the world.
Habitat and ecology: This species grows on steep well-drained granitic slopes in the grasslands with severe winters and summer rain and flowers in summer (unlike most aloes that produce their flowers in winter). There is also a winter-blooming form of this plant called Aloe reitzii var. vernalis that comes from the Vryheid District to the north.

Description: Aloe reitzii is a robust stemless aloe, usually with a single rosette to 90 cm tall, with long relatively broad silvery blue-green leaves with reddish teeth along the margins. It is easily distinguished by the handsome flower spikes with an amazing rubbery red brilliance that are produced in summer. Young plants may produce only one spike but older plants can produce multiple spikes, further enhancing a spectacular sight. The flowers are curved, tubular, bright red above, and lemon-yellow below.
Derivation of specific name: Gilbert Reynolds named this plant in 1943 to honor Francis William Reitz, of the well-known South African Reitz family, who first discovered the plant and cultivated it in his garden.
Stem: None or to 60 cm long, procumbent, rarely branched, on ground.
Rosette: Usually single, 60-90 cm tall (comprising stems) excluding inflorescence.
Leaves: 10-16 per rosette, arcuate-erect, 40-65 cm long, 8.5-12 cm wide, which end in hard sharp points, very shallowly channelled, smooth, glaucous-green to dull green, usually with no markings. The upper is flat or slightly concave and the lower convex, lower surface with few prickles in apical median line. The teeth are reddish-brown, 3 mm long and 7-15 mm apart. There may be 4-8 brownish thorns on the keel.
Inflorescences (racemes) Very showy, 1-1.3 m tall, branching near the base (2 to 6 times) with each stem becoming a vertical spike rising well above the foliage. The racemes are cylindric-conical, densely multi-flowered, the bright red flowers are adpressed, overlapping and down-curved, like tiles on a roof, with the oldest flowers turning yellow at the tips starting from the bottom of the spike. Bracts ovate-acute, 10-15 mm long, 5-7 mm broad.
Flowers: Cylindrical, arcuate-decurved, 32-50 mm long with orange-red buds opening to red above and yellow underside. Mouth downturned. Outer perianth segments fused for 20-30 mm, inner perianth segments free but fused to outer in lower half. Pedicels 2-3 mm long. Anthers exserted 2-10 mm. Ovary 5-9 long, 1.5-4 mm wide, olive-green. Style exserted 8-12 mm.
Blooming season: Summer (February to March.)
Fruit: 25mm long, 14 mm broad.
Similar species: In general habit this species resembles Aloe gerstneri, Aloe petricola and even the spiny-leaved Aloe aculeata, but is distinctly separated by its long (50 mm) curved perianth.

Subspecies, varieties, forms and cultivars of plants belonging to the Aloe reitzii group

Cultivation and Propagation: Aloe reitzii is a summer flowering plant that makes it a useful subject for cold gardens where frost can damage the flowers. It relatively easy to cultivate under a wide variety of climatic conditions provided it is planted in a well-drained situation given adequate water but not over-watered. Although it is a rather rare species of aloe, it is easily distinguished by the handsome erect red flower spikes that are produced in summer
Soil: Grow it in an open sandy-gritty cactus compost. Needs good drainage.
Pots: It needs a relatively shallow pot to accommodate its fibrous roots and provide a very good drainage. It may stay in the same pot for many years.
Watering: This species requires regular water in summer, but is dormant and needs very little water in winter. Keep dry in winter or when night temperatures remain below 10° C. Water it less than average if in bigger pots.
Special need: Provide very good ventilation. Nearly all problems occur as a result of overwatering and poor ventilation, especially when weather conditions are dull and cool or very humid.
Fertilization: Light fertilizer seems to boost its growth whenever additional water is given.
Feed them during the growing season with a fertilizer specifically formulated for cactus and succulents (high potash fertilizer with a dilute low nitrogen), including all micro nutrients and trace elements diluted to ½ the strength recommended on the label. They thrive in poor soils and need a limited supplies of fertilizer to avoid the plants developing excess vegetation, which is easily attacked by fungal diseases.
Exposure: It enjoys light-shade. It may be grown in full sun too but protect in summer from afternoon sun, and avoid reflected heat. It will do its best with some sun and become stressed with inadequate light which could result in poor growth and unnatural shape. Leaves given ideal light conditions (direct sunlight) turn a lovely red and orange, they tend also to turn red with low water and cold situations, a sign generally associated with stress.
Hardiness: It likes warmth (recommended minimum winter temperature 5° C) however plants kept perfectly dry can can survive low temperatures, approx. -2° for short periods, but for safe cultivation it is best to avoid freezing temperatures.
Use: It can be cultivated outdoors in raised beds, terraces if sheltered from winter rain. It grows much better outdoors in spring and summer, it is also adapt for the bright windowsill.
Maintenance: Removal of old flower stalks.
Pest and diseases: Occasionally these plants are infested by scale and aphids, but all known garden pests can be kept to a minimum by simply ensuring optimal growing conditions and healthy plants.
Propagation: Propagation is by seed, as it seldom offsets. Seeds must be sown as fresh as possible. The best time for sowing would be in the spring or summer when temperatures are warm. Use coarse, well-drained sandy soil and cover seeds lightly, then keep moist. Cover the seeds with a fine layer of grit and water from below with a with a long-lasting fungicide, as seedlings are prone to damping off, a fungus that eventually kills the young plants. For the 1-2 weeks cover the pots with a sheet of glass/clear perspex to keep the humidity levels high. Remove the glass and replace it with light shade-cloth and mist once or twice a day for the next two weeks after which most seeds should have germinated. From then on mistings can be reduced to every second and then every third day as the little plants grow. If you have a number of them you could intentionally damage the growing point to see if it will offset, but wait to do that until early spring, when its growing season is beginning. It is easily rooted in potting soil with warmth. Seed grown plants can take up to 7 years to mature and begin blooming.