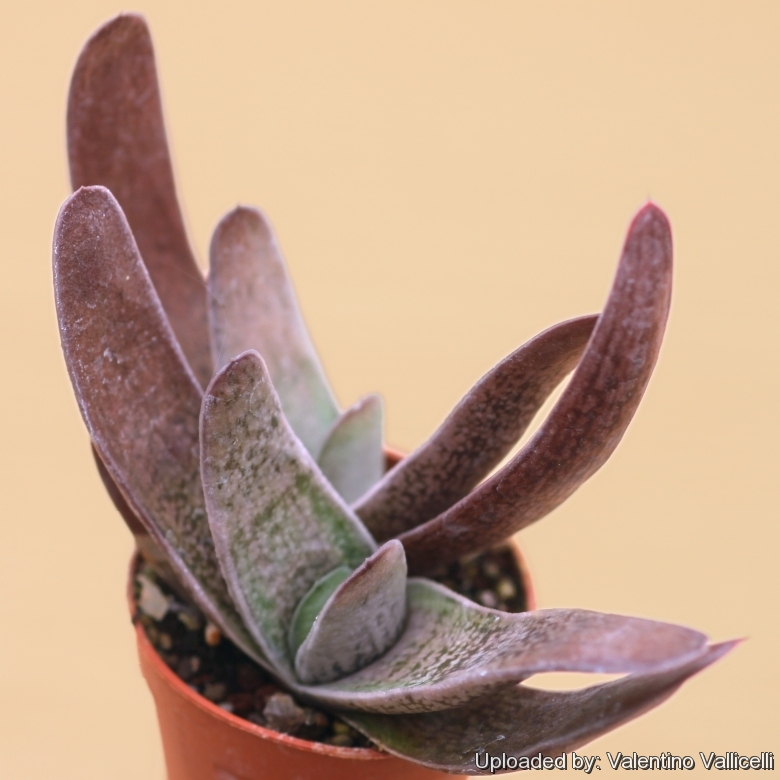 Origin and Habitat: South Africa. Endemic to Western Cape (Eastern portion of the distribution area of the species.)
Altitude: From close to sea level up to approximately 300 m in altitude above sea level.
Habitat: Hilly terrain, river valley and vertical rock ledges, on shale and sandstone outcrops and occasionally Limestone in dry open fynbos vegetation. Gasteria carinata proliferates from stolons from the base of the stem and forms small, well camouflaged, groups among herbs and scattered taller shrubs, often in shade of Carissa bispinosa or occasionally in the open and difficult to locate.
Rainfall: 300–500 mm per annum. Rain occurs in winter and summer but with a tendency to summer dryness.
Temperatures: Summers are hot, with cool nights. Winters are moderate with occasional light frost.

Description: Gasteria carinata is a small to medium-sized decumbent to erect aloe-like succulent. It offsetts freely from the base and soon forms a dense cluster with dull green speckled leaves and racemes of pinkish flowers during spring. Dimension of the clumps 3 to 18 cm tall and 15 to 80 cm wide. It is an extremely variable species. Nowhere in the genus Gasteria is variability illustrated more clearly than in this species. The different clones vary in leaf size, shape, marking, texture, growth habit and some forms have undulating leaves. The var. schweickerdtiana distinguish from the other varieties and forms for the pale, smooth (or very obscurely tuberculate) leaves which are distichous in young rosettes, becoming rosulate and decidedly twisted with 8-12 leaves. It is very similar if not the same as: Gasteria carinata var. glabra. This variety is confined to the Eastern portion of the distribution area of the species.
Roots: Succulent, up to 6 mm in diameter.
Stem: Stemless.
Rosettes: Distichous in a basal fan when young, becoming rosulate and decidedly twisted with 8-12 leaves, erect or spreading. Sometimes remaining distichous even in adulthood.
Leaves: 14-18 cm long, 3,5-4 cm wide at the base, fleshy, triangular-lanceolate, rarely tongue-shaped, narrowed to a stiff hard point, rarely obtuse, rounded , truncate, retuse, or mucronate. Sheets plane or concave above, with a distinct keel or sometimes rounded below, both faces light glossy green or pinkish-grey, smooth, spotted with smooth or slightly raised white tubercles scattered in the upper surface or coalescent into transverse rows beneath. Margin cartilaginous, leathery, bearing small inconspicuous rounded teeth. Juvenile leaves distichous erectl or spreading, tongue-shaped (lorate), the tip rounded or ending in a hard sharp point (mucronate).
Inflorescence: Raceme, 15-90 cm, unbranched or occasionally with a pair of side branches. The floral bracts 6–12 mm long, 2,4 mm broad at the base.
Flowers 2,5-4 cm long like the usual of this genus, pedicel 7–15 mm long, perianth 16-27 mm long, gasteriform part pink swollen at the base by more than half of the flower length, narrowly ellipsoid to rarely globose-ellipsoid, above constricted into a tube 3-5 mm in diameter. Segments tips light pink to white with central green stripes: Stamens oblong, included. Ovary 6-7 mm long, 2,5 mm in diameter. Style 14 mm.
Blooming season: Winter to late Spring (July to November in the southern hemisphere) but with a peak in spring.
Fruit capsules: 19-23 mm long and 7 mm broad.
Seed: Oblong, 3-4 mm in broad, 2 mm thick.
Remarks: Gasteria carinata is related to Gasteria nitida which has bright orange-pink flowers blooming during summer.

Subspecies, varieties, forms and cultivars of plants belonging to the Gasteria carinata group 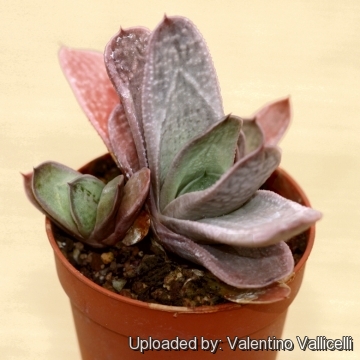 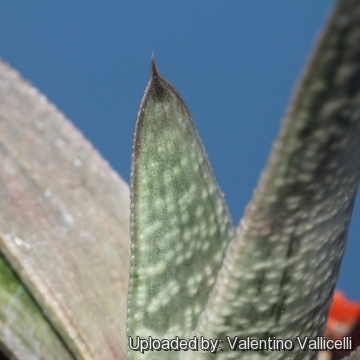 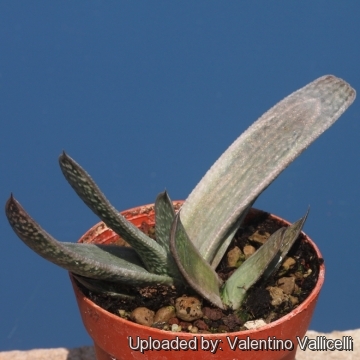 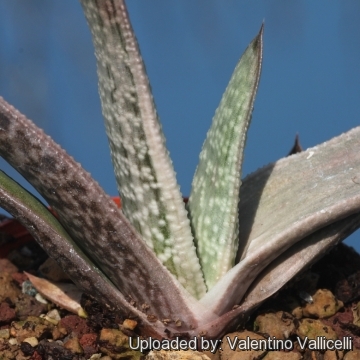 Cultivation and Propagation: It is of easy culture and can grow on window sills, verandas and in miniature succulent gardens where it is happy to share its habitat with other smaller succulent plants, or in outdoor rockeries.
Growth rate: It is a relatively slow-growing plant that offsets to form in age small clusters.
Soil: It is tolerant of a wide range of soils and habitats, but prefers a very porous potting mix to increase drainage. You can grow a plant in a 10-15 cm pot for years and have perfectly happy plants. For best results, use a shallow pot.
Exposure: Need light shade to shade, but will take full sun part of the day. (with some sun exposure the leaf develops a nice reddish tint and remain compact)
Watering: During the hot summer months, the soil should be kept moist but not overly wet. During the winter months, water only when the soil becomes completely dry. Wet soil quickly causes root and stem rot, especially during chilly winter months. No water should ever be allowed to stand around the roots. Low ambient humidity is always needed.
Feeding: The plants are fertilized only once during the growing season with a balanced fertilizer diluted to ½ the recommended strength. Plants react well also to organic feeding (compost or any other liquid fertilizer).
Hardiness: During the winter months, water only when the soil becomes completely dry. Frost hardy to -1°C (Or less). It grows well in Mediterranean gardens where frost is not too severe.
Pest and diseases: Rot is only a minor problem with Gasteria if the plants are watered and “aired” correctly. If they are not, fungicides won't help all that much. Incorrect watering, poor drainage or too much shade can lead to attack by pests and diseases. Care must be given in watering, keeping them warm and wet while growing, and cooler and dry when dormant.
Remarks: Gasterias are best planted in a partially shaded and airy part of the greenhouse, and not too close to the glass roof or sides of the house as the plants can overheat during hot spells.
Propagation: Gasterias are easily propagated by the removal of offshoots or by leaf cuttings in spring or summer. To propagate by leaf cuttings, remove a leaf (best in spring) and let it lie for about one month, giving the wound time to heal. Then lay the leaf on its side with the basal part buried in the soil. This leaf should root within a month or two, and small plants will form at the leaf base. Cuttings are best rooted in clean sand. Once rooted, plants can be planted into individual containers. They can also grown from seed. Sow seed during spring or summer in a warm, shady position in a sandy, slightly acidic soil and keep moist. Cover with a thin layer of sand and keep moist. Germination is usually within 20 days. Seedlings grow slowly and are best planted out about a year after sowing. It is recommended to apply a fungicide when growing it from seed.