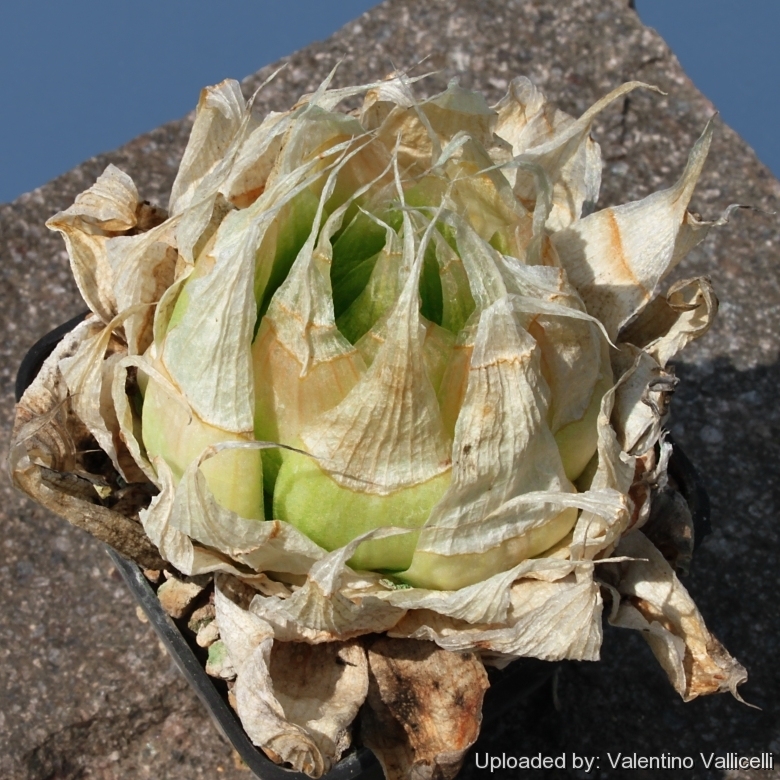 Origin and Habitat: South Africa, Great Karoo at several localities (West and South of Laingsburg to Klaarstrom and also at Rouxpos, SE. Rooinek Pass).
Habitat: They are found in very dry areas where the scarce rain occurs mostly in the summer months, they grows on the lower slopes of the Witteburg Mountains, the climate is very hot in summer and very cold in winter, with the higher mountain slopes often covered in snow. They usually prefer to grow in winter and are found very well hidden by large stones and boulders or under bushes in quartzite soil.

Description: It is a very peculiar solitary plant that don't produces offsets. It is very attractive in the dormant season (summer) when the dead leaf tips are very white, closed in a tight umbrella-like canopy and covering the plant completely. The plants then resemble dried-off onions. It is very slow growing and to rise a nice specimen in cultivation needs time. Considered more difficult than most Haworthias, since they are prone to rot if over-watered, it's a plant that's well worth the challenge.
Rosettes: Stemless that rarely grow any larger than 10 cm in diameter and that withdrawn into soil in time of drought. Specimens in cultivation routinely grow larger than plants in habitat (which is true with most succulent plants, of course)
Leaves: Thin, soft, broad, light green, translucent glabrous and inwardly curved. In the dormant stage more than half of the leaf turns papery-white (onion-skin-like) and becomes thin like parchment paper. This gives the smaller younger internal leaves protection from the harsh summer environment.
Flowers: White, veined with green.

Notes: Haworthia lockwoodii grows in close proximity to Haworthia mucronata and some intermediate populations exist in between the Great- and Little Karoo illustrating the connection. H. lockwoodii is however usually a larger plant and the dying off of the leaf tips during the dry summer is much more pronounced. The plants also apparently link with Haworthia decipiens. 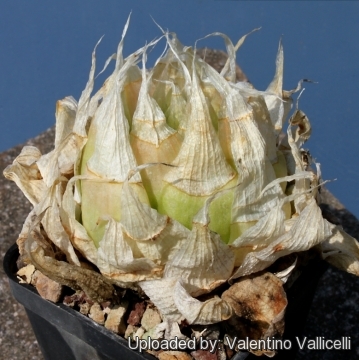 Haworthia lockwoodii Photo by: Valentino Vallicelli
Send a photo of this plant.

Cultivation and Propagation: Be carefully with watering - you can very easy lost the plant when water gets (and stay there for a while) into middle of the rosette as moisture captured between leaves can cause the plant to rot. Water only in winter with sparse watering in spring and autumn only. Some authorities say that the plants should never be watered from above. Potted plants should probably be protected from harsh afternoon sun. Repot every two years with well-draining potting mix.
Propagation: It is not known to produce offsets so propagation is usually done by seeds. Leaf cuttings or coring must also be used to try to reproduce this plant. The leaf-cuttings can dry out if kept under low humidity and rot if kept in humid situations. Coring involves cutting out the center of the plant to produce offsets. All these techniques are very disfiguring to the plant, of course.