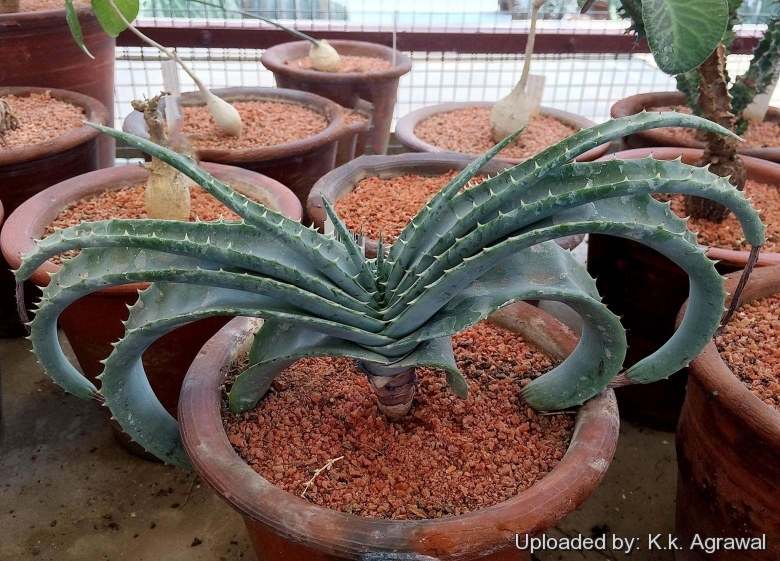 Origin and Habitat: Republic of South Africa (KwaZulu-Natal, Swaziland, Mpumalanga and the Eastern Transvaal near the Swaziland border)
Habitat: It grows in cool, higher-lying areas on rocky slopes near or along the summit of mountains. Like Aloe nubigena, this aloe is an inhabitant of the high, mist-enshrouded mountains.

Description: Aloe suprafoliata is a splendid Aloe, with narrow leaves that grows sideways, one on top of each other like an open book, but developing a rosette form when older. It has beautiful, large flowers on thick stalks that emerge in winter. Aloe pretoriensis looks a lot like this aloe, and is somewhat similarly distichous as a young plant, making misidentification a common situation. Aloe suprafoliata when in flower can easily be identified by its racemes that have a silvery sheen, rounded flower bracts and simple inflorescence.
Habit: Acaulescent or shortly caulescent, usually solitary when young, low to the ground or sometime suckering.
Stem: Very short erect or procumbent, rarely to 50 cm.
Rosettes: Dimorphic with up to 30 leaves. For a long period of time during this plants juvenile phase the leaves of the plant are distichous (distinctly two-ranked ) but as the plant matures finally the leaves radiate out and develop a 360 degree typical rosettes that we associate with many succulents. The best known example of an aloe species making a transition from a fan-leaved juvenile to a rosette-shape adult. Aloe suprafoliata often flowers while the leaves are still distichous, an unusual character in the genus.
Leaves: 30-40 cm long, up to 7 cm broad, lanceolate-acuminate, rigid, somewhat fleshy, and patent or gracefully recurved, deep turquoise to bluish-grey, tinged with purple in cold or deep sun and obscurely lineate. Colour of leaves tends to fade a bit to grey-blue-green as plant ages and becomes mature shape. Marginal teeth 2-5 mm long, soft, reddish-brown, sometimes forked, 5-10 mm apart.
Inflorescence: Simple. Raceme, long and narrow, conical to cylindrical-acuminate, to 25 cm long, 10 cm broad, sub-dense and appear to have a silvery sheen. Up to three simple inflorescences are borne from the plant simultaneously.
Flowers: 40-45 mm long, rose-pink to scarlet, greenish at mouth. Bracts lanceolate-acute, about 20 mm long. Pedicel to 20 mm long. 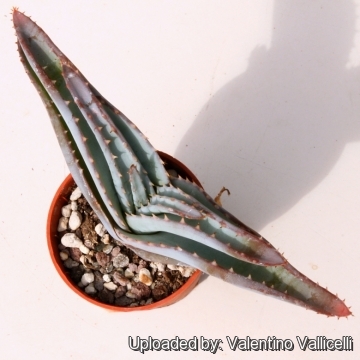 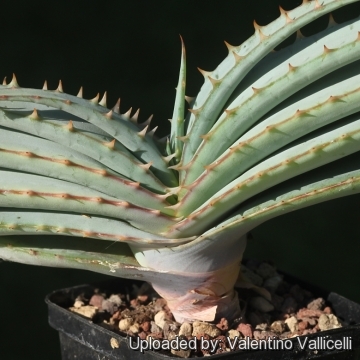 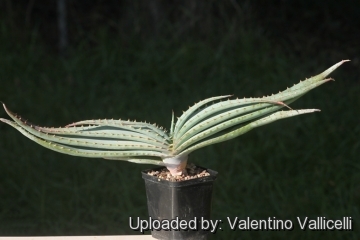 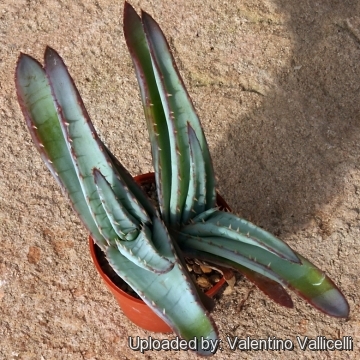 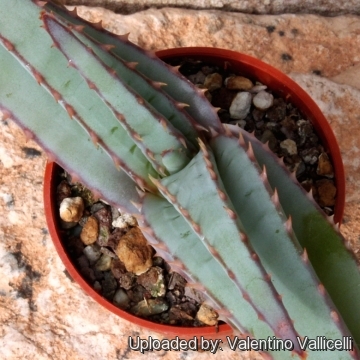 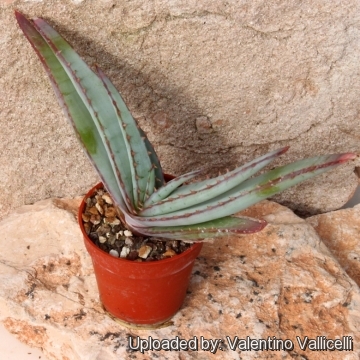 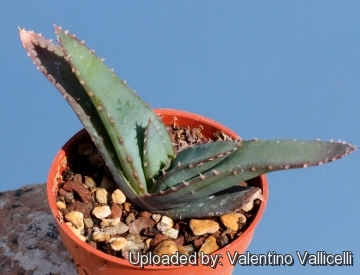 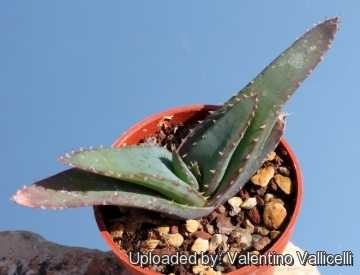 Cultivation and Propagation: This is one of the most attractive foliage aloes and also bears attractive flowers. It is easy to grow and adaptable. It can be grown in large containers.
Growth: It grows slowly, but not agonizingly so under favourable conditions.
Soil: Always use a good quality, loamy sandy soil with plenty of drainage with chips at the bottom of containers.
Repotting: Use pot with good drainage.
Watering: Needs moderate to copious waterings in summer, but do not overwater, or not at all in the colder months of winter. Outdoors it can withstand long periods of drought, but they will thrive and flower more profusely if watered in the correct season. This aloe is very tolerant of drought, although the tips of the leaves may wither and curl during hot, dry periods. Plant in full sun in a well-drained soil and irrigate only occasionally to enhance the red colouration of the foliage. Supplemental watering will help keeping the leaves plump, green and juicy.
Fertilization: Feed it once or twice during the growing season with a fertilizer specifically formulated for cactus and succulents (poor in nitrogen), including all micro nutrients and trace elements diluted to ½ the strength recommended on the label.
Exposure: It need full sun to partial shade, but plants grown in partial shade usually look healthier and more succulent. It is however very hardy when grown in full sun with the minimum water.
Hardiness: When dry it can stand light frost but it is damaged in hard freezes. The leaf tips and blooms get damaged below -2°C (USDA zones 9b-10 ). During the winter months, the plants should be grown cool to initiate flower development (about 5-10°C )
Pests & diseases: Incorrect watering, poor drainage or too much shade can lead to attack by pests and diseases.
Maintenance: Removal of old flower stalks; Divide the crowded clumps periodically. It grows much better outdoors in spring and summer.
Warning: It's teeth are not too sharp, but they can hurt your fingers if you are pruning off some dead leaves (get stiffer once they dry).
Gardening: This is a great plant if you have a bright, sunny spot in an area that doesn't get too much water. In mild climates it can be cultivated outdoors for use in landscaping, it can be grown in rocky, well-drained soil in gardens in drier areas. It adapts well to a variety of soils and climates, but will grow best in regions with a climate close to that of its native deserts not too cold, and not too wet.
Propagation: By seeds or suckers. Fresh seeds germinate quickly at 18° C. Keep seed tray in a dry corner and do not allow to dry out, but may damp off if overwatered. Transplant the seedlings after one year. By division of offshoots that develop around the outside of the main rosette in spring, the cuttings must be dried out for at least 1 week before planting in river sand. It is easily rooted in potting soil with warmth. It can also be propagated or by seed planted in autumn, in trays of coarse river sand, compost and soil. Sprinkle the seeds evenly on the surface and cover with a layer of small pebbles. The pebbles help the seedlings to stay upright and prevent damping off.