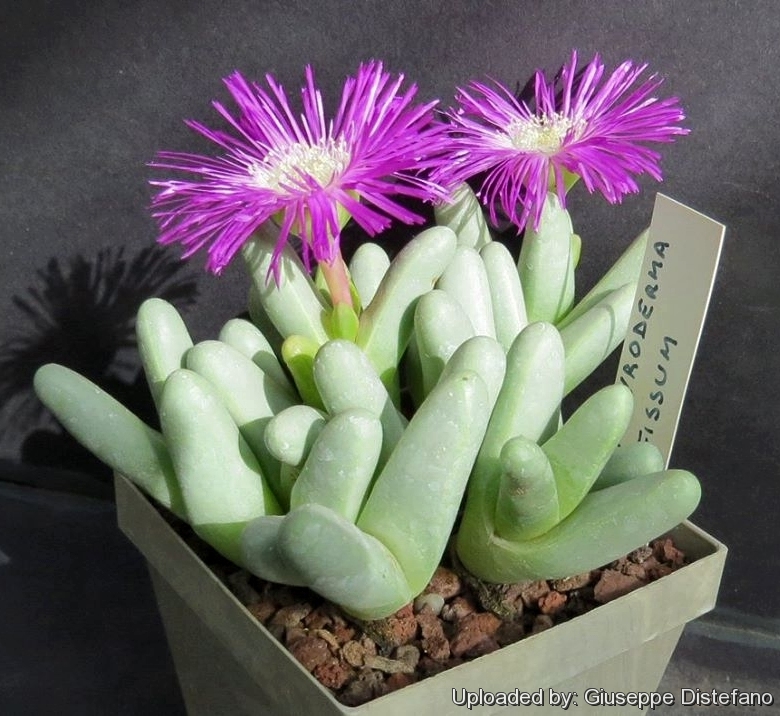 Description: Argyroderma fissum is a miniature clump-forming perennial succulent less than 20 cm in height with age up to 30 cm (or more) in diameter, that can form huge mats of bluish-green finger-like leaves which are quite different to the silver-grey, split-egg plant body found in the rest of the genus. The flowers are solitary magenta with a white centre, but also yellow, pink, or red.
Derivation of specific name: Latin “fissus”, cleft or split, for the gaping leaves of a pair.
Stem: Short, prostrate when old.
Leaves: Reduced to a single pair, (1,5)5-10 cm long, 8-12 mm wide, finger-like, half-cylindrical (sometimes cylindrical at the base), spreading, firm and highly succulent, about 2-4 times longer than broad, rounded at the tip, flattened or convex on the upper side, lacking a cartilaginous edge, and often hooded; green, bluish green to whitish grey and often reddish at the tip. Surface smooth.
Flowers: Solitary, protruding from between the leaves, 30-40 mm in diameter, yellow, pink, purple or red with a white centre. Flower-stalk to 4 cm long.
Blooming season: Its flowers are produced in midwinter.
Fruit: 12-18 locular capsule.
Blooming season: Its flowers are produced in summer.
Taxonomic note: Argyroderma fissum is the only species species of the subgenus Roodia, which is less specialised than the rest of the genus and is considered by Hartmann to be primitive. 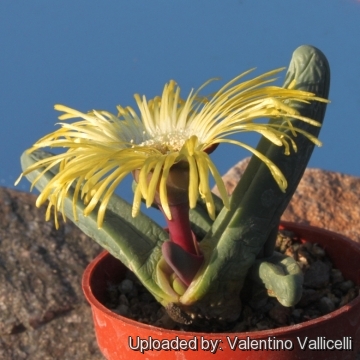 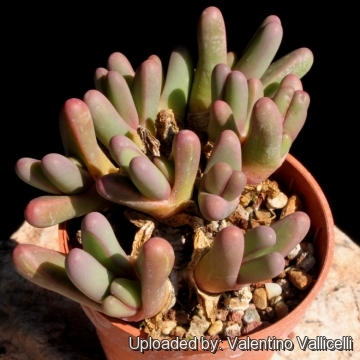 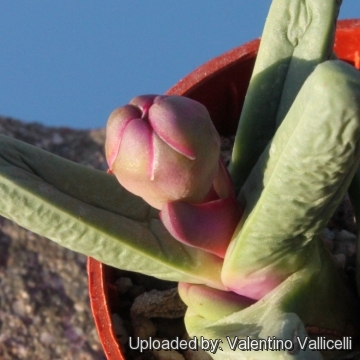 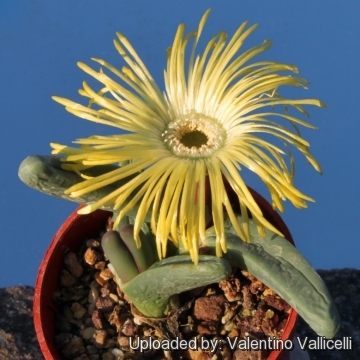 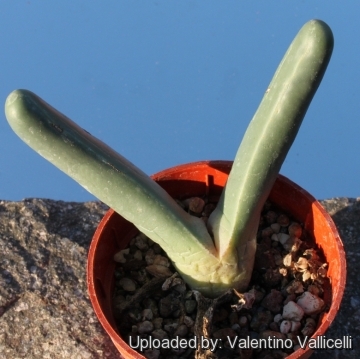 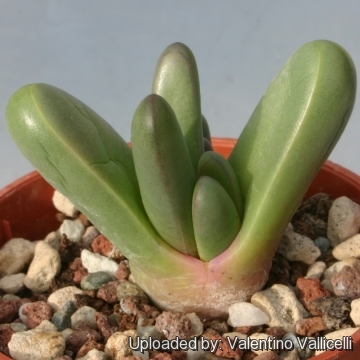 Cultivation and Propagation: Argyroderma is easy to grow. Argyroderma are more forgiving than Lithops of excess water (though it should be rarely given in summer) and thrive in light winter rains in temperate climates and were heading for summer dormancy.
Soil requirements: It needs a very draining mineral, rather acidic, substrate. A mixture comprising 20 % pumice grit, 20% lava grit, 20% quartz grit, 20% coarse river sand and 20 % garden soil seems well suited.
Water needs: Requires little water otherwise its epidermis breaks (resulting in unsightly scars). Water minimally in summer, only when the plant starts shrivelling. But be careful with watering (rot sensitive).
Fertilization: Fertilize moderately during the growing season with diluted high potassium fertilizer.
Hardiness: It is fairly cold resistant and hardy to -5°C (or less if dry) depending on the clone.
Exposure: Need full sun, (with insufficient illumination bodies get thinner as a result of the lack of sun) but keep cool and shaded in summer,
Propagation: Seeds or division of larger clumps. Argyroderma is very easy to start from seed. Seeds germinate in 7-14 days at 21°C. Although they will start from cuttings, it is quite difficult to get them to root. If they start to rot there is usually part of the plant that can be removed and possibly rooted.