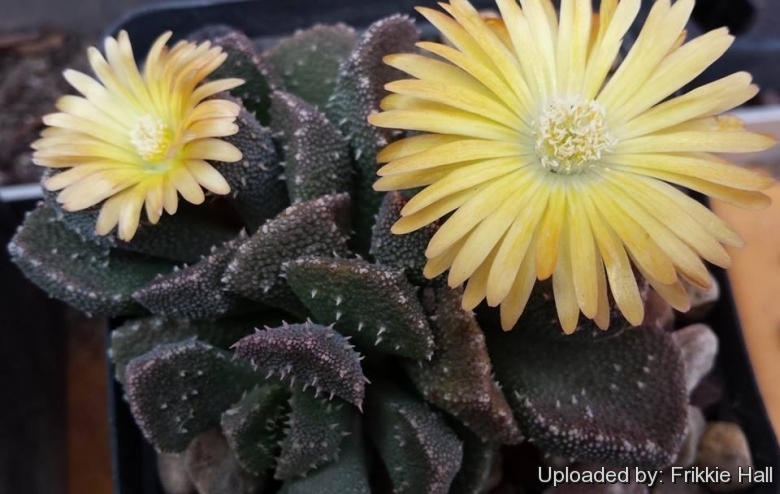 Description: The Aloinopsis setifera is one of the innumerable and controversial form or variety of the very variable Aloinopsis luckhoffii complex that comprises several species which have received numerous names. At one hand of the complex Aloinopsis setifera distinguishes for the extremely long hairy elongated warts, while at the other extreme of the scale Aloinopsis villetii has only very shortly raised warts. Aloinopsis luckhoffii and Aloinopsis lodewykii exhibit well developed warts intermediate in length between the former two.
Habit: It is a low, small succulent, forming dense mats of clustered rosettes.
Leaves: Thick, light bluish-green to dark purple, small, finely warty and textured with white teeth on upper surface.
Flowers: Daisy-like, silky, golden yellow, yellowish bronze or salmon pink, and quite large (2,5-3 cm in diameter) compared to the tiny leaves. Should usually bloom at the end of winter if it gets enough light. If it is too cloudy the flowers fail to open entirely.
Roots: Tuberous root system.

Subspecies, varieties, forms and cultivars of plants belonging to the Aloinopsis luckhoffii group 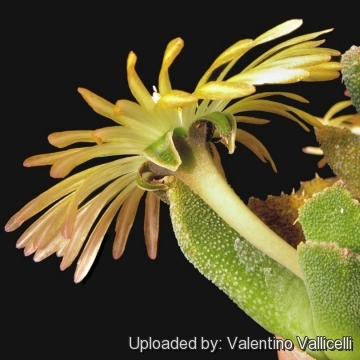 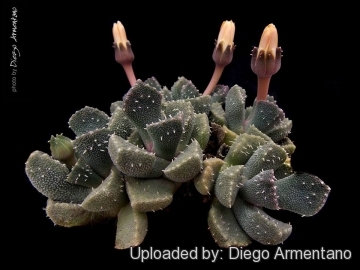 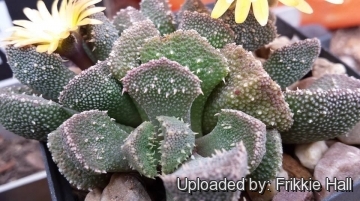 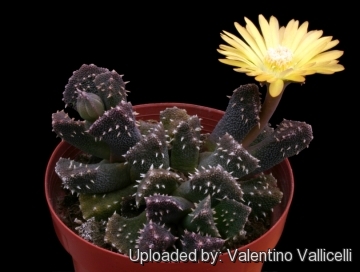 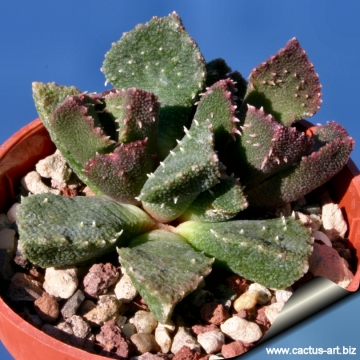 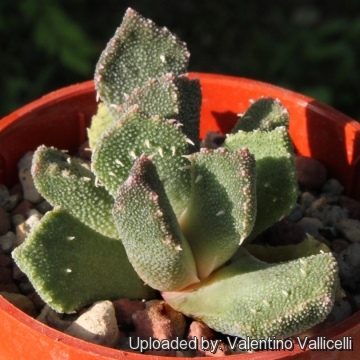 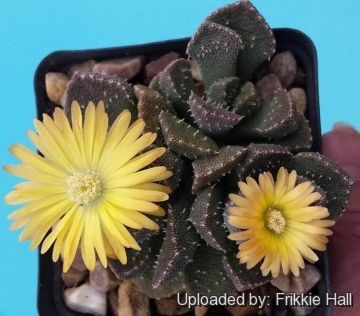 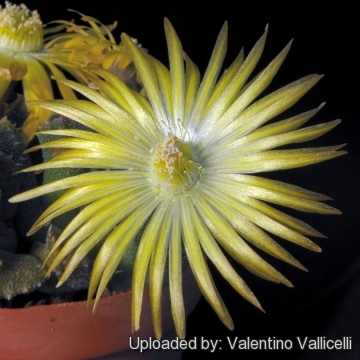 Cultivation and Propagation: They are easy and rewarding plants than can be grown in pots or in the rock-garden. They will grow in the cooler parts of the year, and flower in winter if they gets good light (direct sunlight is essential to bloom well).
Soil: Can be cultivated in the ground (in warm climate) or in a container. The soil should preferably be a very porous potting mix to increase drainage.
Pots: They need small but deep pots to accommodate their tap roots and provide a very good drainage. They can be kept for years in a 7x7 cm pot, and should be repotted only every 2-3 years.
Watering: They come from winter rainfall areas but in cultivation, they can be watered year-round. It is probably dormant in summer, so it is usually recommended not to water much in summer and also reduce watering frequency in winter, but it is a very adaptable species that can grows opportunistically whenever the water availability and growing condition are favourable. Water it less than average if in bigger pots.
Fertilization: Feed them once during the growing season with a fertilizer specifically formulated for cactus and succulents (high potash fertilizer with a dilute low nitrogen), including all micro nutrients and trace elements diluted to ½ the strength recommended on the label. They thrive in poor soils and need a limited supplies of fertilizer to avoid the plants developing excess vegetation, which is easily attacked by fungal diseases.
Exposure: Keep them cool, and half-shaded in summer, need full sun or light shade on the other seasons. They become stressed with inadequate light which could result in poor growth and unnatural shape. It is also perfect for a bright windowsill.
Frost Tolerance: In cultivation they likes warmth (recommended minimum winter temperature 5° C) however plants kept perfectly dry are quite frost hardy (it is reported to be hardy to at least -12° C if very dry). Outdoors they grow best where there are cold winters, but for safe cultivation it is best to avoid freezing temperatures.
Special need: Provide very good ventilation. Nearly all problems occur as a result of overwatering and poor ventilation, especially when weather conditions are dull and cool or very humid.
Use: This is a good pot plant suited for a non heated green house. It can be also cultivated outdoors in raised beds, terraces if sheltered from winter rain.
Pests & diseases: These succulents may be attractive to a variety of insects, but plants in good condition should be nearly pest-free, particularly if they are grown in a mineral potting-mix, with good exposure and ventilation. Nonetheless, there are several pests to watch for:
- Red spiders: Red spiders may be effectively rubbed up by misting the plants from above.
- Mealy bugs: Mealy bugs occasionally develop aerial into the new leaves and flowers with disfiguring results, but the worst types develop underground on the roots and are invisible except by their effects.
- Scales, thrips and aphids: (they are rarely a problem.)
- Rot: Rot is only a minor problem if the plants are watered and “aired” correctly. If they are not, fungicides won't help all that much.
Propagation: Cuttings or seeds. Like most others in this family, this small clump- forming plant is easy to grow from seed. For good germination the small seeds should be scattered on the surface of the compost, any time during the spring when temperatures are warm. Cover the seeds with a fine layer of grit and water from below with a fungicide to prevent damping off. For the 1-2 weeks cover the pots with a sheet of glass/clear perspex to keep the humidity levels high. Remove the glass and replace it with light shade-cloth and mist once or twice a day for the next two weeks after which most seeds should have germinated. From then on mistings can be reduced to every second and then every third day as the little plants grow. To propagate by cuttings, remove a shoot and let it lie for about one week, giving the wound time to heal. Cuttings should first be allowed to dry and heal by placing them on a cool place for at least one week. The basal part should preferably be treated with a fungicide. Plant the cutting in an erect position in sandy soil. Rooting is rapid, and the plantlets can be planted out in small containers when they are large enough to handle.

by Cactus Art
There are a total of 17 Photos.
Click here to view them all!
Cite this page: "Titanopsis setifera" Text available under a CC-BY-SA Creative Commons Attribution License. www.llifle.com 14 Nov. 2005. 21 Sep 2020. </Encyclopedia/SUCCULENTS/Family/Aizoaceae/779/Titanopsis_setifera>