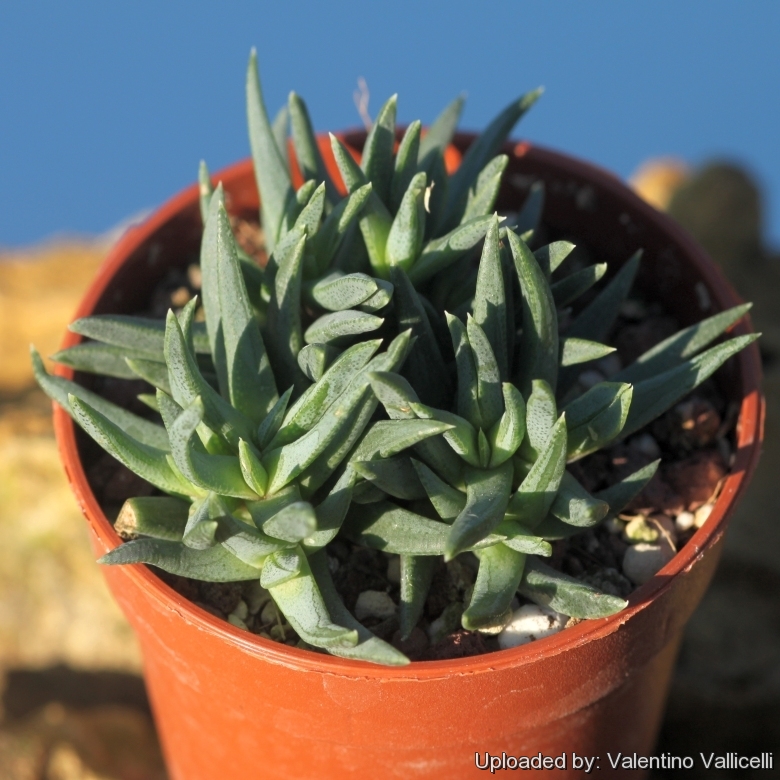 Origin and Habitat: Cradock-District, Eastern Cape, South Africa.
Habitat and ecology: These tufted plants grows under shrubs or in the open in crevices.

Description: Bergeranthus jamesii is a yellow flowered ice plant relative now referred as a synonym of Bergeranthus vespertinus, though slightly smaller. It is an almost stemless, compact, succulent with dense leafy shoots, that spread by means of offshoots with intenodes not visible, it grows to only about 5 cm tall in clumps to 12-15 cm wide with succulent, triangular, finely tapered leaves. In summer, bright yellow, daisy-like flowers cover the the plant.
Leaves: Erect at first, later more or less prostrate, shortly fused at base, narrowly acuminate, triangular in section, upper surface flat, slightly wrinkled, greyish-green with some darker translucent dots and a dense cover of wax consisting of fine platelets with sharp edges petering out in threads occasionally. Lower surface semi-cylindric at base, keeled towards tip. In their normal, natural state each leaf is only 10-30 mm long, but in cultivation they can get up to 50 mm long, 2.5-6 mm broad and 3-4 mm thick.
Flowers: 3-5 together in cymes, yellow, stalks 2-3 cm, petals in several rows, linear to narrowly lanceolate 6-11 mm long, 1.5-2 mm wide. Stamens numerous, erect.
Blooming season: Summer. Flowers are produced in succession for months.
Fruit (capsules): 5-celled, closing body a broad protrusion reaching under the covering membranes which possess a closing ledge and a low distal rim, 6-7 mm in diameter.
Seeds: Pear-shaped.

Cultivation and Propagation: Bergeranthus are easy, enormously cold hardy and rewarding plants than can be grown in pots or in the rock-garden ( the toughest seem to be B. jamesii). They can be watered year-round, water regularly from spring to Autumn but reduce watering frequency in winter, growth period is early Spring to late Summer, but is a very adaptable species that can grows opportunistically whenever the water availability and growing condition are favourable. Keep them cool, and half-shaded in summer, need full sun or light shade on the other seasons. Potted Bergeranthus look best in a heavy soil and the same is true for plants in a rockery. Requires good drainage.
Frost Tolerance: Very frost hardy and grows best where there are cold winters (it is reported to be hardy to at least -12° C if very dry). It is difficult to keep the leaves free of scars and dead leaf-tips, but the abundant flowers hide them.
Propagation: They are very easy to propagate from cuttings or (rarely) seeds.