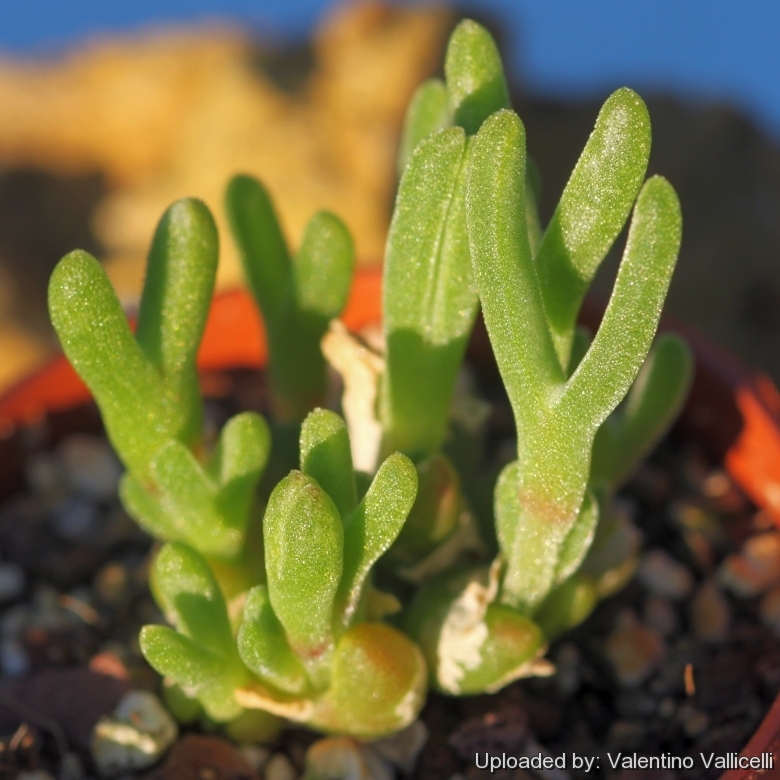 Origin and Habitat: Northern Cape, South Africa (Richtersveld and northern Namaqualand between Lekkersing, Steinkopf, Port Nolloth and Wallekraal). Extent of occurrence 13 426 km²
Habitat and Ecology: Succulent Karoo. Meyerophytum meyeri is locally common on loamy soils often with quartz pebbles and is not in danger of extinction.

Description: Meyerophytum meyeri is a strictly autumn/winter growing succulent with small glistening green leaves and dazzling flowers that are either magenta throughout, or rose with a white base, or white (turning pink with age). These peculiar plants are heterophyllous, that is to say that they produce leaves of two kinds: the first pairs of the season (for the summer dormant period) are egg shaped, forming a bilobed body; the second ones (during the winter) are much longer than wide, forked, with the leaves free for about two thirds of their length. Meyerophytum meyeri is a rather variable species, especially in the colour of the petals and filaments.
Habit: Meyerophytum meyeri is a small, much-branched, cushion-shaped perennial shrublet up to about 30 cm in diameter.
Derivation of specific name: For Louis G. Meyer (1867–1958), German explorer and plant collector.
Stem: Branches slender, short, with visible intenodes.
Leaves: Leaves all dark green, yellowish green, becoming reddish with age, in differing pairs, on slender stems which do not seem to have the beaded appearance of Monilaria. The first leaf-pair forms a shortened, rounded body to 10 mm long and 10 mm broad, thicker than the upper and united for half or more of their length; The second leaf pair, at the start of the season short, elongating later, with leaves up to 10-35 mm long and 2-3(-4) mm in diameter, fused for about one-third of their length and separated for 2-3 mm. In cultivation Meyerophytum meyeri may produce one or two additional leaf-pairs similar to the second one.
Flowers: Solitary, terminal, shortly stalked. Sepals 5, 3 of them with membranous margins. Petals in 3-4 whorls, linear, fiery red, rose-purple throughout, or rose and basally white, or white turning pink with age. Filaments purple, yellow or white. Nectar glands forming a continuous ring. Ovary 5-7- celled. Stigmas 5-7.
Fruits (capsules): (4-)5(-7) chambered, with whitish closing bodies, 4-10 mm in diameter with 8-15 seeds per locule. Pedicels to 45 mm long, usually curved.
Blooming season: Winter.
Seeds: Ovoid or pear-shaped. 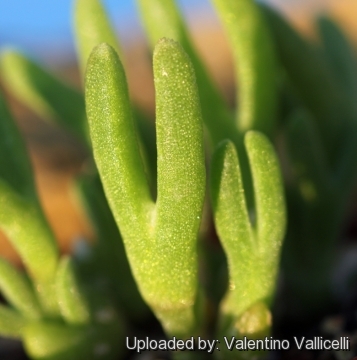 Cultivation and Propagation: It is relatively easy to grow. These plants grow on winter rain and head for summer dormancy. The growing season in northern hemisphere is from September to March. Water minimally in summer. Water regularly in winter after the new long green leaves appears at their extremities in autumn after the summer resting period. Requires good drainage. It enjoy some shade (avoid direct sun as it grows wild among rocks and under the shade of other plants) and in summer it need to be kept in a cool area. Hardy to -2°C. Ensure a very good ventilation. Avoid to repot frequently. This plant may stay in the same pot for many years. Plants grown in larger containers have frequently relatively poor flowers. It might improve when the plants are given their own, small individual pots.
Be careful not to apply too much fertilizer
Propagation: It can be reproduced both by cuttings and seeds. Take the cutting from a grown-up mother plant. Each cutting must contain one or more branches along with a fraction of root.