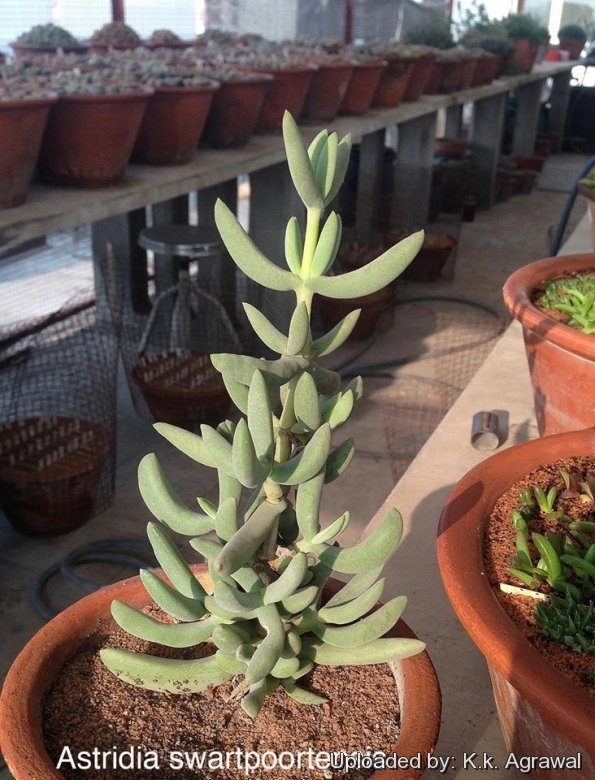 Origin and Habitat: Swartpoort , Richtersveld, Namaqualand. South Africa
Habitat and ecology: Astridia swartpoortensis is a range-restricted species that grows in gravelly soil near rocks. It is threatened by habitat degradation, mining and collection.

Description: Astridia swartpoortensis is a local or morphological form of Astridia speciosa from Swartpoort (hence the name), and the two plants are not readily distinguishable, if not for the geographical provenance. It is a small succulent shrub up to 3o cm tall with long curved pink velvety leaves. It has exceptionally pretty red flowers, the largest flowers in the genus, but several other species are very close to it. The fruit has conspicuous distinctive raised rims.
Stem: Erect with visible intenodes.
Leaves: Semi-lunate, 3-angled, long persistent, shortly fused at base, 35-50 mm long, 10-16 mm broad, 18-20 mm thick, epidermal papillae long.
Flowers: Daisy-like, 35-55 mm across, petals red to purple, their bases white, filamentous staminodes broad, yet surrounding the central column of stamens, white or yellow, their tips often red, overtopping the stamens.
Fruits (capsules): 6-locular and of the Ruschia type, ca. 20 mm long, with no valve wings, with well developed covering membranes and closing bodies, rims 3-4 mm hight.
Seeds: The distant papillae higher than broad, elongating gradually towards the micropyle, ca. 1.5 mm long,1 mm broad
Similar species: Because of similarities in the flower, this name has often been used for plants of Astridia longifolia, from which A. swartpoortensis differs mainly by the semi-lunate pink tomentose leaves. This leaf shape, however, A. swartpoortensis shares with Astridia vanheerdei.

Subspecies, varieties, forms and cultivars of plants belonging to the Astridia speciosa group

Cultivation and Propagation: The Astridia swartpoortensis is a "winter" grower which is most active from late winter until later spring and heading for summer dormancy, but in favourable growing conditions it keeps going over the summer too and doesn't need particular care.
Soil: Requires good drainage as it it is prone to root rot. It can grows outdoor in sunny, dry, rock crevices (protection against winter wet is required) It can also be cultivated in alpine house, in poor, drained soil.
Fertilization: It thrives in poor soils and seems sensitive to an excess of potassium.
Watering: Water minimally in summer, only when the plant starts shrivelling, water more abundantly when they are growing in the autumn and spring. Requires little water otherwise its epidermis breaks (resulting in unsightly scars).
Light: It needs a bright sunny or light shade exposure in winter, but keep cool and shaded in summer.
Hardiness: It prefer a very bright situation and will take a light frost (Hardy to -5°C) if it is in dry soil. USDA zones 9A – 11.
Uses: Container, rock garden.
Propagation: Seed in spring or cuttings. It is easily propagated by seed.