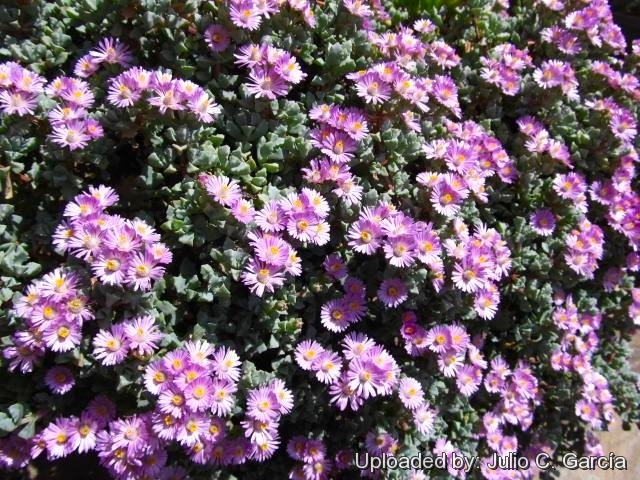 Origin and Habitat: South-western Cape, South Africa. Cultivated for ornament, and naturalized on coastal rocks and walls in S. W. England, (Isles of Scilly).
Habitat: Oscularia deltoides occurs in crevices on steep sandstone rocks, shaded for most of the day, in the winter-rainfall mountains of the South Africa's fynbos. The area is fire-prone.

Description: Oscularia deltoides (Pink Iceplant), also known by a synonym, O. muricata, is one of the most attractive and compact-growing species in the genus. The shining reddish stems are much branched and rather crowded with fairly short and triangular, silver-blue leaves with the keel and margins toothed. The fat, succulent leaves are three-sided (hence the qualifier deltoides – "triangular"). The flowers are a bright pinkish purple and attract a multitude of flying insects that pollinate them.
Habit: Plants are low, dense, perennial succulents with a multitude of sturdy, leafy branches. They form rounded or sprawling shrublets to 30 high and spreading indefinitely.
Stems: Up to 50 (or more) cm, wiry, decumbent or trailing. The stems are often tinged purple.
Leaves: Chunky, deltoid to triangular-obovoid, broadest above the middle, denticulate, blue-green, pruinose and often reddened on the keel and margins, 5-18 cm long, 3-10 mm broad, less than twice as long as wide. Peduncles 2 3 mm long.
Flowers: Fragrant (almond-scented), crowded in cymes, 1-3 together, 1-2 cm in diameter yellow-centered lavender-pink to purple.
Blooming season: Late-spring into summer. Flowers are closed up in the morning but open, often to cover the plant, in the afternoon.
Chromosome number: 2n= 18. 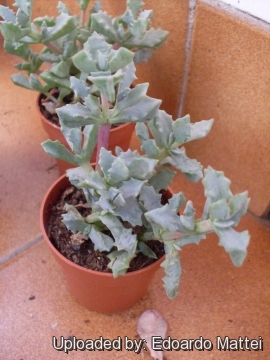 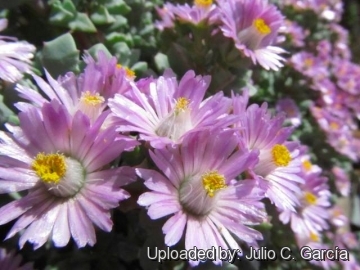 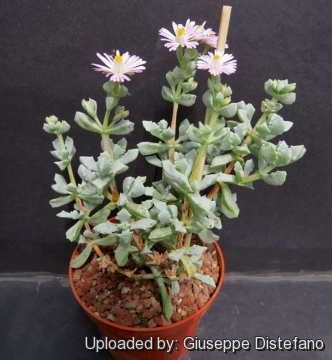 Oscularia deltoides Photo by: Giuseppe Distefano
Send a photo of this plant.

Cultivation and Propagation: Oscularia deltoides are easy and rewarding ornamental plants that grow naturally in the winter rainfall areas of South Africa and can therefore tolerate very dry periods in summer. This low-maintenance succulent spreads out forming a colourful mat and grows well on the rocky edge of flower beds where it cascades over the edge. It is also a very useful groundcover and can be grown in pots too. The real beauty of this crawling mesemb is that it will tolerate extreme environmental conditions without showing any signs of stress. It attracts butterflies.
Exposure: Keep them cool, and half-shaded in summer, need full sun or light shade on the other seasons. In too much shade the plants are a bit sparse and bloom less.
Soil: It will require a free draining compost.
Waterings: They can be watered year-round, water regularly from spring to Autumn but reduce watering frequency in winter, growth period is early Spring to late Summer, but is a very adaptable species that can grows opportunistically whenever the water availability and growing condition are favourable. Plants well watered in full sun are more plump and make a denser planting while those less watered can take on reddish hues in the summer.
Frost Tolerance: This species is very frost hardy and grows best where there are cold winters (it is reported to be hardy to at least - 8° C and maybe a bit less for short durations if very dry). In colder temperate regions it requires winter protection or glass cover.
Propagation: Cuttings or (rarely) seeds.