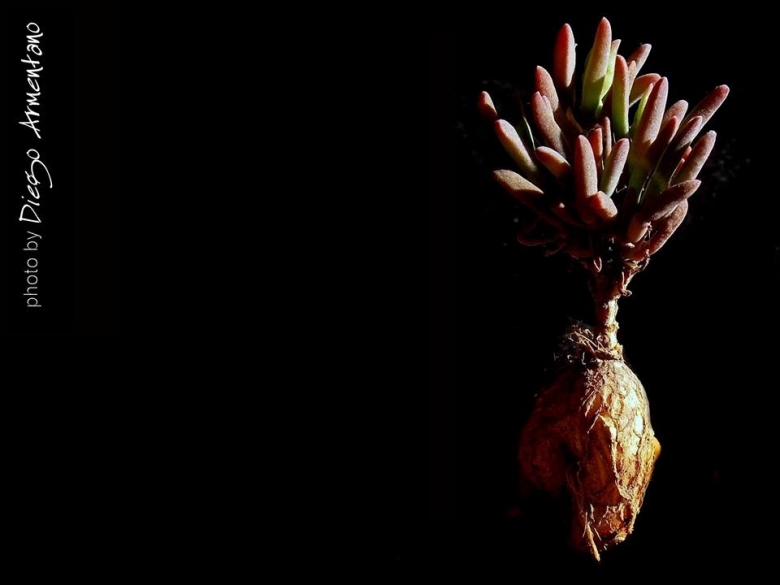 Origin and Habitat: Delosperma napiforme, from the fringes of Aizoaceous range in both geography and climate. It is native to the French Island of Réunion (southern coast of the island) in the Indian Ocean, East of Madagascar, but now naturalized in Madagascar too. Also thrives in the Mediterranean area and in Southern California.
Habitat: It grows on basalt outcrops, ancient lava flows and rock-debris near the sea with other salt-tolerant species exposed to salty spray. Despite the proximity of the sea, it is adapted to drought as other herbs and shrubs of the family Aizoaceae species. In its habitat it grows in a summer rainfall regime but also thrives in the cool, moist winters of southern California’s Mediterranean climate. In the Island of Réunion this species is protected: it is forbidden to destroy it, to pick it up and to sell or buy a wild specimen.

Description: Delosperma napiforme (better known by its synonym Mestoklema macrorrhizum) is a dwarf succulent endemic to the island of La Réunion. The tuberous roots develop underground but can eventually be elevated in caudiciform fashion. It produces white flowers in summer.
Habit: It is a perennial succulent subshrub with many creeping stems emerging from the base. After a while the apex of the older branches dry up almost completely and the plant is forced to put forth new branches directly from the carrot root or from the pieces of old branch bases.
Roots: The typical form has a well-developed, succulent, napiforme root (shaped like a turnip) usually single in plants raised from seeds, mostly fascicled (branched) in plants propagated by cuttings.
Leaves: Narrow, fleshy, salty, succulent, shiny, grainy, dark green to light green or reddish .
Flowers: White emerging from leaf axils at the apex of the branches.
Fruits: Small capsules.
Remarks: This species looks very similar to Delosperma bosseranum (from Madagascar) and virtually all plants sold under the names Delosperma napiforme (or Mestoklema macrorrhizum) are actually D. bosseranum. Both D. napiforme and D. bosseranum have small white flowers, swollen carrot-like root and are self-fertile (they spreads thousands of seeds everywhere). The differences are minimal and the two species are not readily distinguishable, if not for the geographical provenance. Delosperma napiforme, tends to lengthen its branches to a greater extent before flowering, the leaves (more triangular in cross-section in Bosseranum) are very smooth, glossy green, tinged with red at the apex; those of bosseranum are of a paler glaucous green with red amaranth to ochre apexes and do not give the impression of being smooth, but it seems like covered by soft invisible hairs. Moreover the young branches in Delosperma napiforme are often reddish. 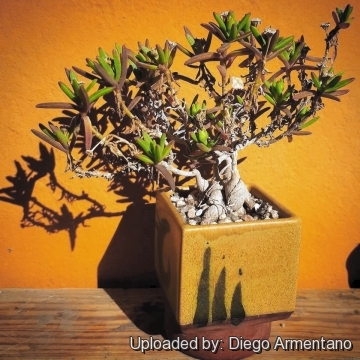 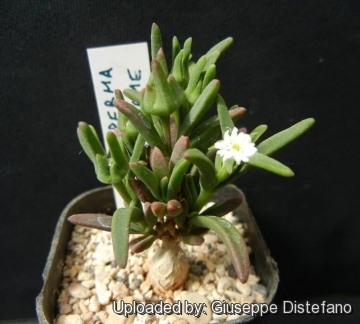 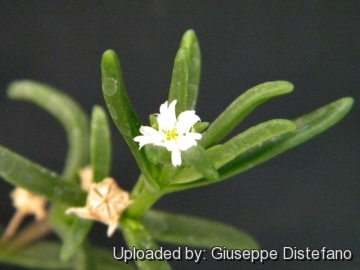 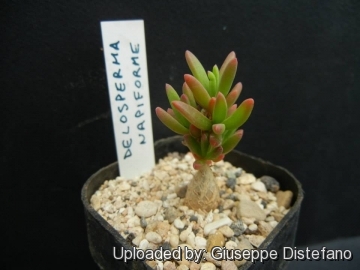 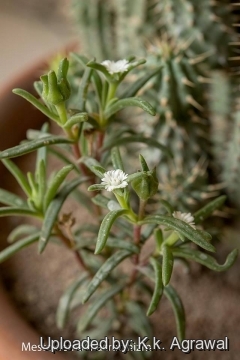 Cultivation and Propagation: Although regarded as a choice and difficult plant, in cultivation Delosperma napiforme is relatively easy. It is a particular favourite of caudiciform plant enthusiasts.
Growth rate: Plants grow slowly and “caudex” take many years to enlarge. Clustering in cultivation, if grown correctly, it will reward the grower with generous displays of white flowers.
Sun Exposure: This plant has an excellent heat tolerance, and need full sun to light shade exposures. High levels of light are needed to flower and for good plant development.
Salt tolerance: It is very tolerant of extreme coastal and beach exposure, as well as salt spray. This is one of the most salt tolerant mesembs!
Potting medium: Use a cactus mix or add extra perlite or pumice to regular soil potting soil. A gritty, very free-draining compost is suitable, and clay pots help the plants to dry out between watering. For best results, use a deep pot.
Fertilization: Need a perfect fertilizer diet in summer. Use preferably a cacti and succulents fertilizer with high potassium content including all micro nutrients and trace elements or slow release fertilizer.
Watering Needs: Water normally in the growing season from March to October. No water should ever be allowed to stand around the roots. Keep almost completely dry in winter. The swollen caudex makes it very tolerant of under watering.
Hardiness: It can be cultivated in a wide range of areas with a Mediterranean climate such as California. It can withstand wet summers and cold moist winters which makes it unusual in climatic requirements for this genus. It is quite frost resistant if kept dry, hardy as low as -5°C. It can be grown outdoors in the summer months to benefit from direct exposure to light, and especially exposure to high summer temperatures. Recommended Temperature Zone: USDA 10-12.
Rot: Rot it is only a minor problem with Mestoklema if the plants are watered and “aired” correctly. If they are not, fungicides won't help all that much. The plant turns immediately to mush when over watered, or watered out of season. Care must be given in watering, keeping them warm and wet while growing, and cooler and dry when dormant.
Uses: Seedling of this species are used as a rootstock for: Lithops, Faucaria, Gibbaeum, Pleiospilos, etc...
Caudex exposure: The remarkable tuberous rootstock (caudex) is often raised above the soil line so that this can be seen and more readily appreciated. For best results the tuber must be exposed only when plans become mature enough, usually after several years (8-12 or more years) of underground growth, as the exposed caudex will no longer increase in size once it has been lifted above the soil line.
Reproduction: Seeds or cuttings. They spreads thousands of seeds everywhere, the seed should be planted as soon after harvesting as possible. Germination usually occurs within about a week or two. Seed germinate at 15-21 °C. Seedlings are nice and easy to grow.