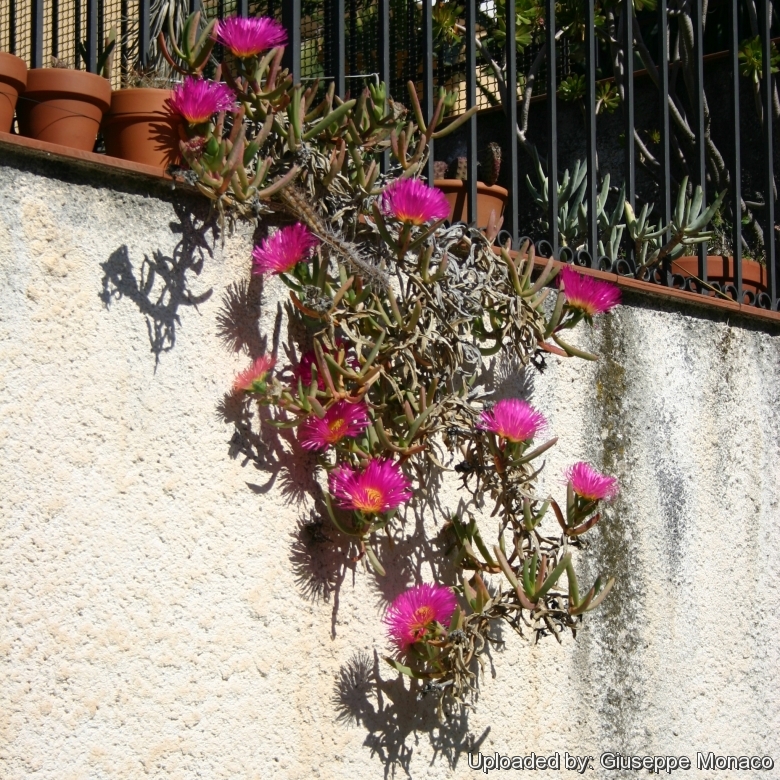 Origin and Habitat: Carpobrotus chilensis is thought to be native to south Africa, but it's original home is lost to history. This species is familiar in the coastline of western North America and in parts of South America (from Oregon to Chile), where it is an introduced invasive species that has taken hold and become common. It has also been planted extensively for coastal dune stabilization, highway landscaping and as an ornamental in Mediterranean Europe, Canary Islands, Germany, Chile, Argentina, and Australia.
Altitude: 0-100 metres above sea level.
Habitat: It forms extensive mats that spread out over sandy flats and dunes or coastal bluffs, margins of estuaries and along roadsides. This species is hardy and can withstand the disturbance by humans which is common on the well-traveled beaches where it grows. This trait gives it an advantage over many native plant species causing it to become a threat to native coastal ecosystems where it has invaded. It propagates by seed and vegetatively. Even small stem fragments can regenerate into a new plant, making control difficult. In Australia, Carpobrotus is considered an invasive pests in native plant communities.

Description: Carpobrotus chilensis, commonly known by the common name sea fig, is a species of succulent plant with fleshy triangular leaves and bright magenta flowers with yellow anthers that open in the morning and closes at evening.
Habit: It is a long-lived, spreading or mat-like perennial leaf succulent.
Stems: Up to 2 m long, trailing, rooting at the nodes with grey fracturing bark with mahogany, shiny surface beneath.
Leaves: Opposite, thick, elongate, widest distal to middle, 4-7 cm long, 5-12 mm broad, smooth, cross-section rounded-triangular usually with a whitish bloom (glaucous) and often tinged with purple. Margins and keel smooth (never toothed).
Inflorescences: One-flowered at the end of the stems, pedicel 10-50 mm long.
Flowers: Daisy-type, 3-5 cm in diameter, bright pink or magenta. Calyx lobes 5, unequal, slightly triangular in cross section, 10-20 mm, outer angle smooth. Petals many (100-140), fringelike, rose-magenta in 2-3 whorls, 10-25 mm long. Stamens 100-250, white, in 3-4 whorls, 4-7 mm long, papillate proximally. Anthers yellow. Stigmas 2-3 mm, shorter than stamens, papillate adaxially. Placentation parietal. C. chilensis has facultative self-fertilization.
Blooming season: Flowering year-round, mostly early spring-summer. The flowers of Carpobrotus chilensis open in the morning and close at night.
Fruit: Berrylike, oval to subglobose with receptacle tapering to pedicel, 17-20 mm green to yellowish, 8-10 chambered. The fruits are edible, abundant, pleasant-tasting, juicy and does not open at maturity.
Seeds: 200-350.
Remarks: Carpobrotus chilensis is similar to, and often mistaken for, its close relative "ice plant" (Carpobrotus edulis) which grows alongside and sometimes hybridizes with it. Its flowers are magenta and are smaller than those of ice plant that can be 10 cm wide and are mostly yellow.

USES:
A) It is an easy-to-grow carpet-forming succulent groundcover, ideal for low-maintenance and water-wise gardens.
B) It is a drought-resistant trailing plant for stonewalls.
C) Its leaves are edible, as are its fruit, as with other some members of the Aizoaceae family. The ripe fruit are gathered and either eaten fresh or made into a very tart jam. The fruits are tasty and can be eaten fresh.