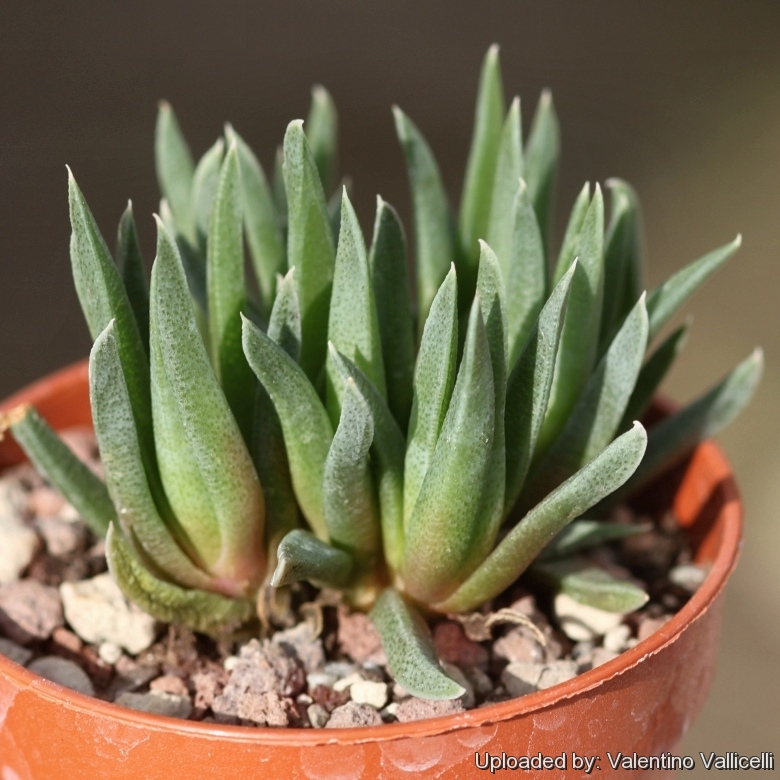 Origin and Habitat: Eastern Cape, South Africa. Bergeranthus katbergensis is widespread along the escarpment from Adelaide in the south west to Shawbury in the east and as far north as Burgersdorp.
Altitude: 1100–1750 metres above sea level.
Habitat: It grows in restricted “skeletal” habitats such as rock cracks on sandstone soils in dry Sandy High veld Grassland, Moist Upland Grass-land and Southeaster Mountain Grassland. The annual rainfall is 398–786 mm with an average of 532 mm that falls predominantly in the summer months in the form of thunderstorms.

Description: Bergeranthus katbergensis is a local or morphological form of Bergeranthus concavus. The timing of flower opening is similar, except that it occurs earlier in the day, from approximately noon, and the flowers close again by mid-afternoon. It is named in reference to the type locality, the Katberg Pass in the Fort Beaufort District.
Habit: It is a small tufted succulent with upright leaves, single or in loose clumps up to 20 cm in diameter.
Laves: 8–10, pairs of equal length, 20–25 mm long, 6–7 mm broad, lanceolate, shortly acute, mucronate, tapering abruptly to base, central pair erect, outer pair erect, blade not curving, V-shaped or D-shaped in cross section, yellow green, smooth, surface with scattered raised, smooth, rounded wax sculptures, broadest in the middle.
Flowers: Diurnal yellow. Petals linear-lanceolate to oblanceolate 10-15 mm long, 1-2 mm broad, spreading yellow, tinged reddish below. Sepals broadly lanceolate, acute 7-10 mm long green with a semi-transparent winged margin. Filaments 105-160, in an erect column, inner ones sparsely white lanulose 4–6 mm in length.
Blooming season: Flowers off and on over a long period during the summer and so far doesn't mind the heat.
Fruits (Capsules): Closing body pyriform with concave sides, apex rounded with a shallow central groove, 7–10 mm × 3–7 mm.
Seeds: Ovate in side view with short, bluntly protruding micropyles abouut 1 x 07 mm.

Subspecies, varieties, forms and cultivars of plants belonging to the Bergeranthus concavus group

Cultivation and Propagation: Bergeranthus are easy and rewarding plants than can be grown in pots or in the rock-garden. They can be watered year-round, water regularly from spring to Autumn but reduce watering frequency in winter, growth period is early Spring to late Summer, but is a very adaptable species that can grows opportunistically whenever the water availability and growing condition are favourable. Keep them cool, and half-shaded in summer, need full sun or light shade on the other seasons. Potted Bergeranthus look best in a heavy soil and the same is true for plants in a rockery. Requires good drainage.
Frost Tolerance: Very frost hardy and grows best where there are cold winters (it is reported to be hardy to at least -12° C if very dry). It is difficult to keep the leaves free of scars and dead leaf-tips, but the abundant flowers hide them.
Propagation: Cuttings or (rarely) seeds.