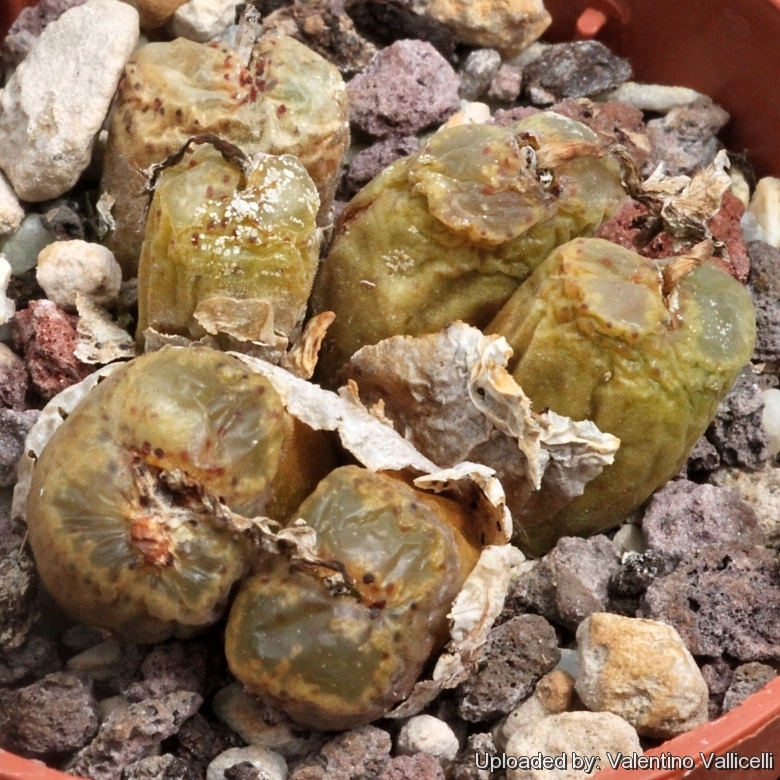 Subspecies, varieties, forms and cultivars of plants belonging to the Conophytum pellucidum group

Notes: The conical shaped bodies of Conophytum pellucidum do not easily absorb sunlight, but have translucent window parts in the top surface that allow sunlight to be captured and utilized even when the plant are at the soil level or retracted below the surface of the soil. This is an interesting evolutionary adaptation to overcome this light problem; their leaves are a simple optical system that permits light striking the windows to be diffused onto the green, photosynthesizing surface situated underground. So, with a minimum of exposure to the outside environment, a maximum area of photosynthetic tissue is ensured. 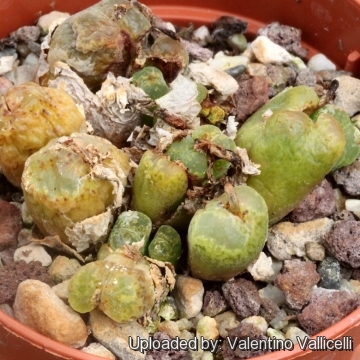 Cultivation and Propagation: Conophytum pellucidum and its varieties are among the most popular of this genus but relatively difficult to grow. These plants grow on winter rain and head for summer dormancy. The growing season in northern hemisphere is from September to March. During this period they can be lightly watered about once a week or (better) misted every day and will become plump. In Africa, the mist from morning fog provides moisture. Otherwise their epidermis breaks (resulting in unsightly scars). Water minimally in summer, (only occasional misting). Start watering again in autum after the previous year's leaves have dried up. Require good drainage. They enjoy full sun or half-shade and in summer they need to be kept in a cool area. Hardy to -2°C. Ensure a very good ventilation. Avoid to repot frequently. They may stay in the same pot for many years. Plants grown in larger containers have frequently relatively poor flowers. They might improve when the plants are given their own, small individual pots.
Propagation: They can be reproduced both by cuttings and seeds. Seed must be sown in the spring or summer. The seedlings should not be disturbed until they are well rooted, after the first or second year they should be big enough to separate and be planted into their own pots. Take the cutting from a grown-up mother plant. Each cutting must contain one or more heads along with a fraction of root.