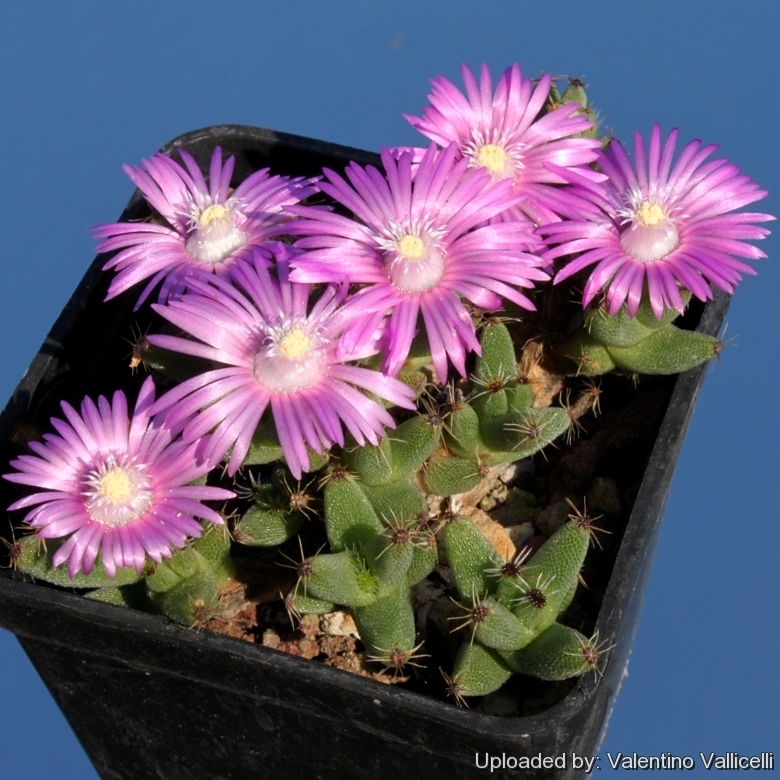 Description: Trichodiadema marlothii is a dwarf perennial succulent, forming a dense rounded shrub or matt of intermingled short blue green leaves with brownish tip reaching sizes of approximately 4-5 cm tall. It produces gorgeous white or pink blooms.
Stems: Wiry, woody, densely branched prostrate to decumbent, almost pressed to the ground, internodes short almost completely covered by leaves.
Roots: Swollen, tuberous. In plants raised from seeds the root is usually solitary (napiform) but specimens grown from cuttings will form a thick irregular, much-branched tuber. This root, often improperly considered a caudex, can easily be raised above ground level out of the pot for ease of contemplation.
Leaves: Short blue green, less than 2 cm long, cylindrical. Tips brown with a crown of soft of brownish-white bristles radiating around the center giving the appearance of a cactus areole.
Flowers: Daisy-like, white, pink or purple-red 3-3,5 cm in diameter, with 1-2 rows of petals.
Blooming time: Flowers bloom from spring to autumn.

Notes: Trichodiadema looks surprisingly like a cactus, but is not a cactus. Its leaves are succulent and end in a circle of stiff hairs, giving the plant a similar appearance to some species in the cactus genus Mammillaria. 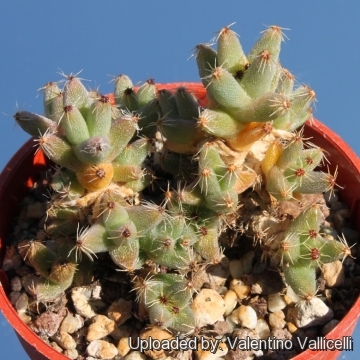 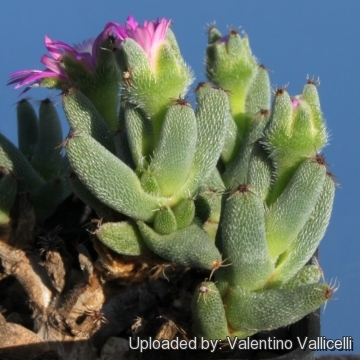 Cultivation and Propagation: Likes a part-shade position (some early or late sun) but is quite tolerant as regards sun and intense heat. Growing in well-drained soil, Tolerates considerable frost a low as – 4° C (or less) and dry conditions due to its tuberous roots. This species is slow growing and after some years, the roots can be raised for effect, creating a beautiful succulent bonsai. This plants in the first years are usually grown in black nursery containers but if you have a mature specimen with a nice caudex, a bonsai pot or dish seems to make the plant a little more special and helps display the plant well.
Use: Roots of Trichodiadema species have been used in the past for speeding the fermentation of bread, beer, etc. It is presumed they contain either yeast or sugars which increase the rate of fermentation.
Propagation: Seeds, it can be also reproduced by cuttings.