Origin and Habitat: Northern Cape, South Africa
Habitat: It grows in very dry rocky areas often in crevices of quartzite rocks. Rain mainly in autumn, occasionally in spring and summer. It is threatened by habitat loss.

Description: Schwantesia triebneri is a low growing compact and bunched leaf-succulent that forms small yellowish glaucous cushions with time. It is very floriferous.
Stems: Very short, internodes not visible.
Leaves: 4-6 cm long, 6-10 mm broad, up to 5 mm thick, opposite (in pairs) erect to speading, marcescent around internodes, hardly connate, half-circular beneath near the base, trigonous above, light grey to yellowish glaucous, velvety (especially when young) due to short hairs which terminate the papillae, apiculate without teeth at the apex, often tapered with pink point, more or less asymmetrical with an oblique keel towards the apex and margins horny and sometimes tinged reddish.
Flowers: 4 to 5 cm in diameter, stalked, solitary, ebracteolate, petals yellow in a single series. Stamen in central column, staminodes absent.
Blooming season: It flowers profusely throughout the winter.
Fruit: 5-(6)-locular, erect between the leaves, winged with persistent pedicel.
Seeds: Small pear shaped.

Subspecies, varieties, forms and cultivars of plants belonging to the Schwantesia triebneri group 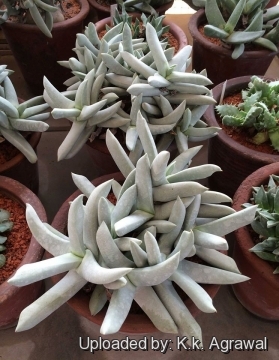 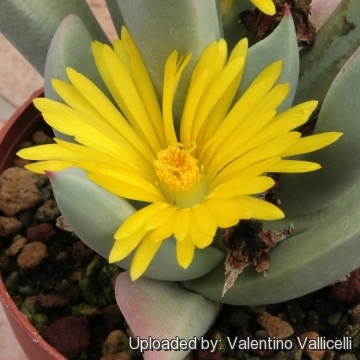 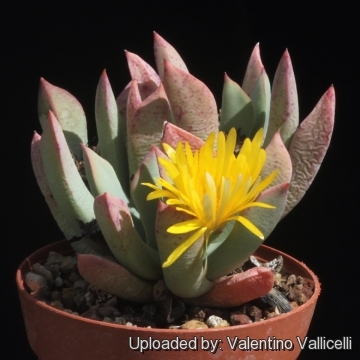 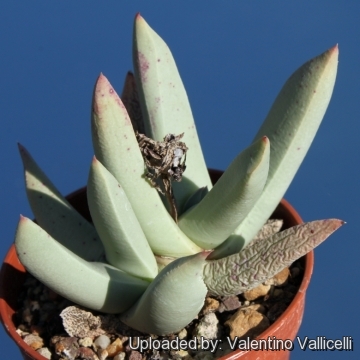 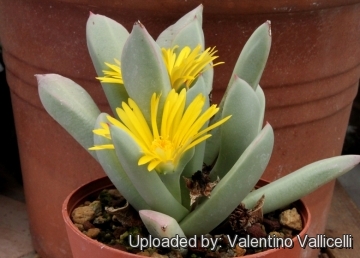 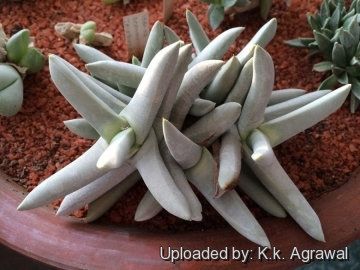 Cultivation and Propagation: The Schwantesias areeasy to grow. These plants grow in autumn-winter rain areas and head for dormancy in summer.
Growth rate: It is a slow growing species that clusters easily in cultivation, if grown correctly, it will reward the grower with generous displays of tiny flowers.
Soil: Since roots are quite shallow, use a cactus mix or add extra perlite or pumice to regular soil potting soil. A gritty, very free-draining compost is suitable, and clay pots help the plants to dry out between watering. For best results, use a shallow pot, and only use the smallest diameter pot that will accommodate the plant.
Waterings: Requires little water, otherwise its epidermis breaks (resulting in unsightly scars). Regular water in autumn through to spring. Water minimally in summer, only when the plant starts shrivelling but it will generally grow even in summer if given water. No water should ever be allowed to stand around the roots.
Exposure: Keep cool and shaded in summer, needs full sun or light shade in the other seasons. High levels of light are needed in winter to flower and for good plant development.
Fertilization: Need a perfect fertilizer diet during the growing season. Feed them once during the growing season with a fertilizer specifically formulated for cactus and succulents (high potash fertilizer with a dilute low nitrogen), including all micro nutrients and trace elements diluted to ½ the strength recommended on the label. They thrive in poor soils and need a limited supplies of fertilizer to avoid the plants developing excess vegetation, which is easily attacked by fungal diseases. Some growers fertilize frequently, some hardly ever. However, for the highly succulent mesembs, fertilization is not really necessary.
Hardiness: It is quite frost resistant if kept dry, hardy as low as -5° C.
Rot: Rot is only a minor problem with mesembs if the plants are watered and “aired” correctly. If they are not, fungicides won't help all that much. The plant turns immediately to
mush when over watered, or watered out of season. Care must be given in watering, keeping them warm and wet while growing, and cooler and dry when dormant.
Reproduction: Seeds, cuttings or division. Sow them in autumn. Germination usually occurs within about a week or two. Seed germinate at 15-21 °C. Cover the seeds with a very fine layer of grit and water from below with a fungicide to prevent damping off. For the first 3-4 days cover the pots with a sheet of glass/clear perspex to keep the humidity levels high. Remove the glass and replace it with light shade-cloth and mist once or twice a day for the next two weeks after which most seeds should have germinated. From then on mistings can be reduced to every second and then every third day as the little plants grow. Take the cuttings from a grown-up mother plant. Each cutting must contain one or more heads along with a fraction of root and permit them to dry out a couple of days, lay the cuttings on the soil and insert the stem end partially into the soil. Try to keep the cutting somewhat upright so that the roots are able to grow downward.