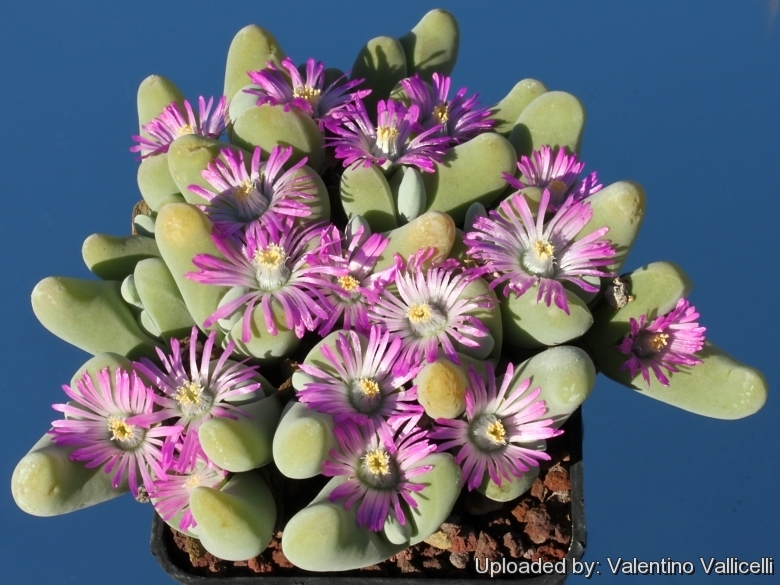 Gibbaeum velutinum Photo by: Valentino Vallicelli
Phisantefontein. The flowers can be white or pink/violet, they open in winter and last for a long time.

Origin and Habitat: South Africa, Western Cape. Southern fringe of the western Little Karroo just north of the Langeberge from west of Barrydale from Springfontein to Soutkloof and Muiskraal and is also reported from Sandkraal.
Habitat and Ecology: Succulent Karoo in bare poorly weatheredshale ridges with or without quartz cover, and on shallow acid soils (pH <6) with high stone content. Plants are threatened by gravel mining for road construction, and this threat is continuing sporadically with road upgrades and maintenance and by grazing and trampling by livestock.

Description: Gibbaeum velutinum familiar under the name Mentocalyx velutina is a slow growing species spreading into grey-green carpets. It is rather variable in its leaf shape and size ranging from plants with long and narrow leaves to plants with short and thick leaves. Gibbaeum velutinum resembles a small Glottiphyllum in its growth of fleshy leaves and flowers of either pink or pale magenta, white flowered plants are known only from cultivation as Gibbaeum schwantesii.
Habit: Gibbaeum velutinum is a perennial clumping, mat forming succulents up to 5 cm tall and up to 30 (or more) cm wide. The plant is compact with only the upper surface of leaves visible.
Stems: Short, branched, woody and prostrate, with the remnants of old dry leaves, each branch ending in 2 pairs of leaves.
Leaves: Fleshy, paired, joined at the base, finger-like, mostly broad-triangular, more or less horizontally compressed, strongly keeled beneath. The leaves forms unequal pairs, in which the longer leaf is mostly hook-shaped while the short one addpressed to it with a neat cut margin visible close to the the longer leaf. The longer leaf-pair about 3−7 cm long, the smaller 2-4 cm, velvety, bluish grey-green, dark green, green-brown or silvery/grey. The epidermis is covered by characteristic minuscule branching hairs that give it a silver/velvety appearance. Every year a few new leaves grow from the central stem.
Flowers: Daisy-like, pale pink/violet to pale magenta (or white), 20−35(-50) mm in diameter and long lasting. Pedicel 2-2,5(-50) mm long. Petals in 2 rows. Filamentous staminodes white, basally faintly pink, filaments white.
Blooming season: Late winter to spring.

Subspecies, varieties, forms and cultivars of plants belonging to the Gibbaeum velutinum group

Notes: Various species of the genus Gibbaeum are called in Afrikaans, ‘Haaibekkie’. In English this means ‘beak of a shark’. This very apt name is derived from the shape of the two leaves that together form the plant growth. They differ in size and because these leaves grow closely together the fissure of most species looks exactly like the beak of a shark, though without the teeth of course. 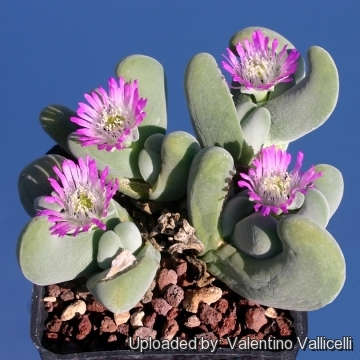 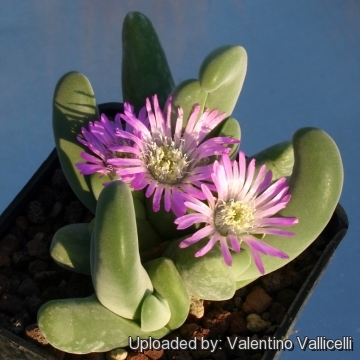 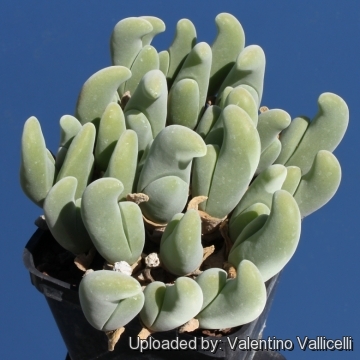 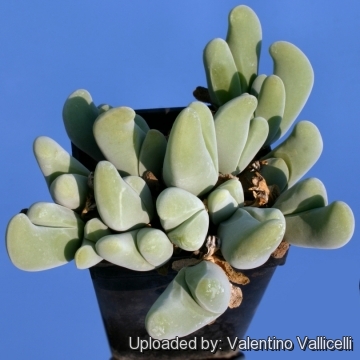 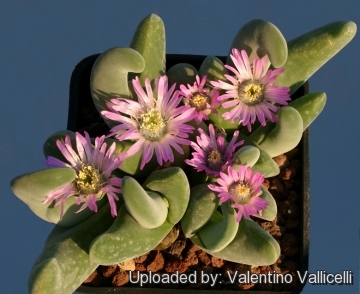 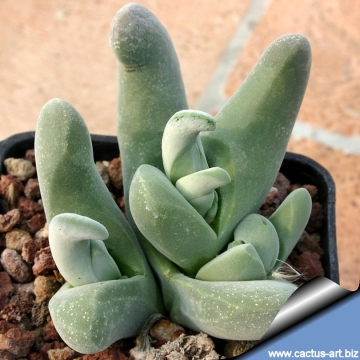 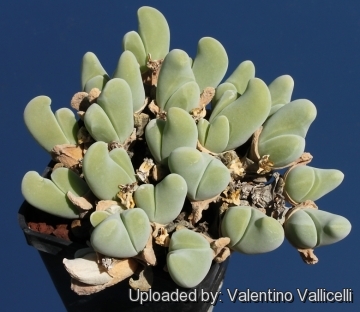 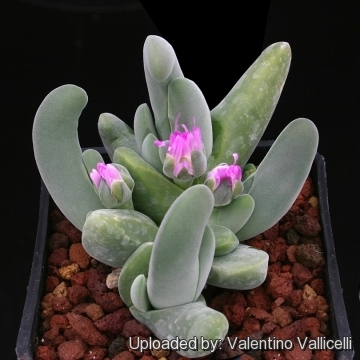 Cultivation and Propagation: It is a "winter" grower which is most active from late winter until later spring and heading for summer dormancy, and notoriously difficult to grow because it rot very easily, but Gibbaeum velutinum is not so difficult in cultivation, keeps going over the summer too and don’t’ need very special care.
Soil: It grows best in sandy-gritty soil and requires good drainage as it is prone to root rot. It can grows outdoor in sunny, dry, rock crevices (protection against winter wet is required) It can also be cultivated in alpine house, in poor, drained soil.
Fertilization: Feed it once during the growing season with a fertilizer specifically formulated for cactus and succulents (poor in nitrogen), including all micro nutrients and trace elements diluted to ½ the strength recommended on the label. It thrives in poor soils and need a limited supplies of fertilizer to avoid the plants developing excess vegetation, which is easily attacked by fungal diseases.
Watering: The Gibbaeums thrive in dry and desert regions and are able to stand extended periods of drought and require careful watering. Water minimally in summer, only when the plant starts shrivelling, water more abundantly when they are growing in the autumn and spring, but let the soil dry between soaking. Requires little water otherwise its epidermis breaks (resulting in unsightly scars). If grown in a container, bottom watering by immersing the container is recommended. It must have very dry atmosphere.
Light: It needs a bright sunny or light shade exposure in winter, but keep cool and shaded in summer.
Hardiness: It prefer a very bright situation and require a minimum temperature 5°C (But will take a light frost and is hardy down to -7° C for short periods if it is in dry soil). USDA zones 9A – 11.
Uses: Container, rock garden.
Pests and diseases: It is vulnerable to mealybugs and rarely scale.
Propagation: Seed in autumn or (or rarely) cuttings. Take the cutting from a grown-up mother plant. Each cutting must contain one or more heads along with a fraction of root and permit to dry out a couple of days, lay it on the soil and insert the stem end partially into the soil. Try to keep the cutting somewhat upright so that the roots are able to grow downward. It is relatively difficult to root Gibbaeums from cuttings and generally pointless as well, so quick are they from seed.