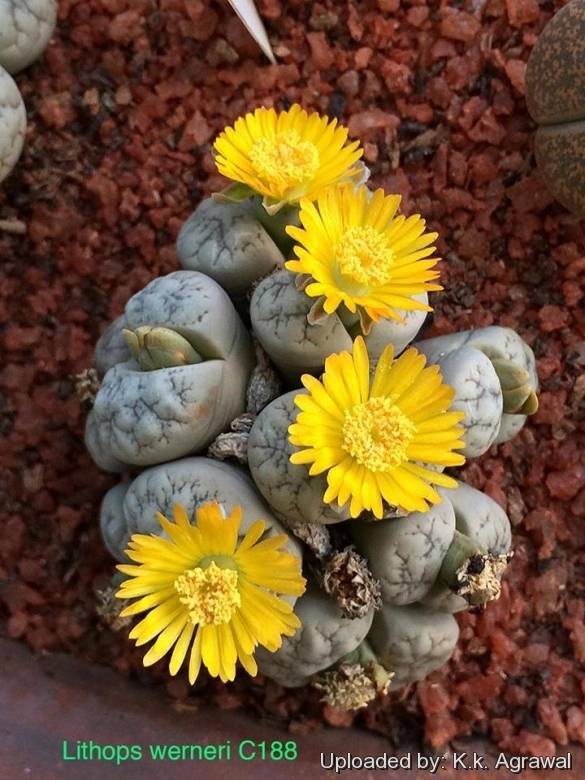 Origin and Habitat: Lithops werneri has a monocolonial distribution limited to a small patch in the Erongo Mountains, Karibib district, Namibia.
Habitat: It grows in a rocky areas thickly strewn with smooth, brownish-white pebbles and which this Lithops resembles to an unbelievable degree, this camouflage allows them to escape detection and is a very effective strategy for escaping predation. This species has a very restricted range: only one population is known with extent of occurrence estimated at 1 km². Rainfall expect up to 375 mm per annum in summer (Mostly in February). Substrata mainly composed by weathered granitic gravel. Colour of the background light brownish white, light brown. They are pollinated by bees, flies, wasps, gnats, bugs and other insects that are common in the area.
Conservation: Lithops werneri is assessed as highly vulnerable. There was a drastically reduction in population size around 1950, as several hundred plants were collected. Afterwards several visitors over a period of decades to the only known habitat of Lithops werneri reported that no plants could be found, so it was supposed extinct. However the journal of the British Cactus and Succulent Society, 'Cactus World', describes in their June 2012 issue that Lithops werneri was re-introduced to its original site with the help of the BCSS members and the permission of the Namibian conservation departement. Other than the fact of the re-introduction itself, the most interesting news would be that they found some plants already present after a number of trips had found no trace. Collecting is the main potential threat to the population, along with habitat destruction from tourist activities in the area.

Subspecies, varieties, forms and cultivars of plants belonging to the Lithops werneri group 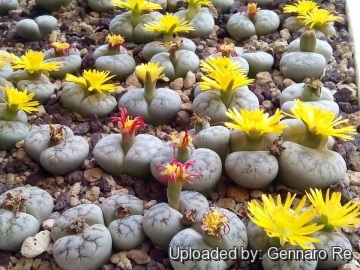 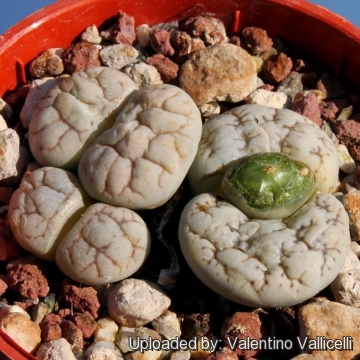 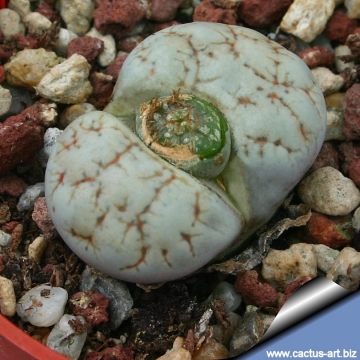 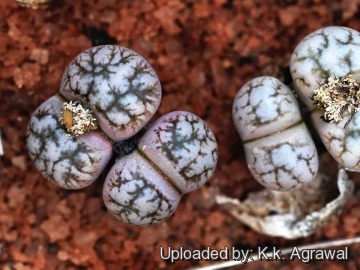 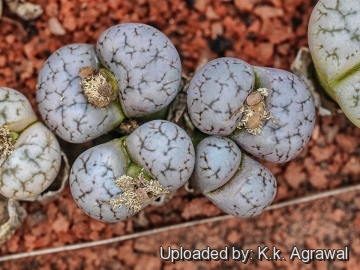 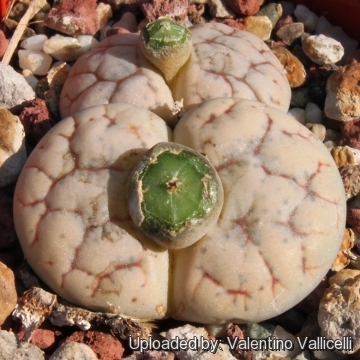 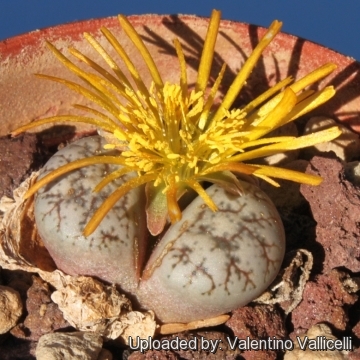 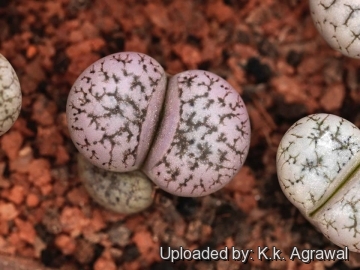 Cultivation and Propagation: The Lithops (a.k.a. Living Stones) are some of the world's most fascinating plants and are sought by the collector of succulent plants. Paying attention to the particular growing requirement of Lithops is especially important. If you provide the Lithops with the right conditions, they will reward you with their unique shape, size, colour and a proliferation of blooms in autumn. However, Lithops are tricky plants that are very particular about their growing conditions and require the right maintenance in order to keep happy. But don't be afraid even the best growers have plants that mysteriously dry up, or leave during the night. While Lithops are picky about their care, if you are patient and remember the basics, your efforts will be rewarded. Being small plants, a representative collection can be grown on a patio table, a sunny windowsill or a shelf in the greenhouse.
Soil: They grow best in an open mineral, sandy-gritty soil and requires good drainage as they are prone to root rot. They can grow outdoor in sunny, dry, rock crevices (protection against winter wet is required) They can also be cultivated in alpine house, in poor, drained soil.
Repotting: They may stay in the same pot for many years. Plants grown in larger containers have frequently relatively poor flowers. Flowers might improve when the plants are given their own, small individual pots.
Watering They Require little water otherwise the epidermis breaks (resulting in unsightly scars). The basic cultivation routine is: Stop watering after flowering. Start watering after the old leaves are completely dry (usually late March or Early April). Water freely during the growing season, soak the compost fully but allow it to dry out between waterings. In the winter season the plant doesn’t need watering, the plant in this time extracts water from the outer succulent leaves, allowing them to shrivel away, relocating water to the rest of the plant and to the new leaves that form during this period. If grown in a container, bottom watering by immersing the container is recommended. Water sparingly only when warm, no water when cold. Nearly all problems occur as a result of overwatering and poor ventilation, especially when weather conditions are dull and cool or very humid. They must have very dry atmosphere.
Fertilization: Feed them once during the growing season with a fertilizer specifically formulated for cactus and succulents (high potash fertilizer with a dilute low nitrogen), including all micro nutrients and trace elements diluted to ½ the strength recommended on the label. They thrive in poor soils and need a limited supplies of fertilizer to avoid the plants developing excess vegetation, which is easily attacked by fungal diseases. Some growers fertilize frequently, some hardly ever. However, for the highly succulent mesembs, (Lithops, Conophytums, etc.) fertilization is not really necessary.
Light: They prefer a very bright situation and in winter they need the maximum amount of light you are able to give them, but keep more cool and partially shaded in summer. Outdoor (Lithops prefer full sun, with some shade in the hottest summer months.
Hardiness: They require a minimum temperature 5°C (But will take a light frost and are hardy down to -7° C for short periods if they are in dry soil). USDA zones 9A – 11.
Uses: Container, rock garden.
Pests and diseases: They are vulnerable to mealybugs and rarely scale.
Remarks: After flowering in the autumn and extending through winter season the plant doesn’t need watering, but they will still be growing, the new bodies will be increasing in size extracting water from the outer succulent leaves, allowing them to shrivel away. In fact the plant in this time extracts water and nutrient stored in the outer succulent leaves, allowing them to dehydrate relocating the water to the rest of the plant and to the new leaves that form during this period until the old leaves are reduced to nothing more than "thin papery shells".
Propagation: Seed or (or rarely) cuttings. The small seeds can be sown in pots of fine, well-drained sand, any time during the spring and summer months when temperatures are warm. Cover the seeds with a very fine layer of grit and water from below with a fungicide to prevent damping off. For the first 3-4 days cover the pots with a sheet of glass/clear perspex to keep the humidity levels high. Remove the glass and replace it with light shadecloth and mist once or twice a day for the next two weeks after which most seeds should have germinated. From then on mistings can be reduced to every second and then every third day as the little plants grow. Take the cuttings from a grown-up mother plant. Each cutting must contain one or more heads along with a fraction of root and permit them to dry out a couple of days, lay the cuttings on the soil and insert the stem end partially into the soil. Try to keep the cutting somewhat upright so that the roots are able to grow downward. It is relatively difficult to root Lithops from cuttings and generally pointless as well, so quick are they from seed.
Comment: Improvement of Lithops characteristics: Some growers (but not all!!) think it is very intriguing to reinforce any characteristic of cultivated Lithops of by crossing two similar selected plants and then back-crossing with the mother plant. This way we can eventually get some interesting results. Of course, many of the nicest Lithops we grow in cultivation have already been selected over time. However many Lithops are already nice plants which can’t really be improved, on the other hand one could try to improve the colour or the markings etc. Now if we have two particular plants we may attempt to breed between them and can maybe get a whole improved population and then select some better offspring to continue the selection.