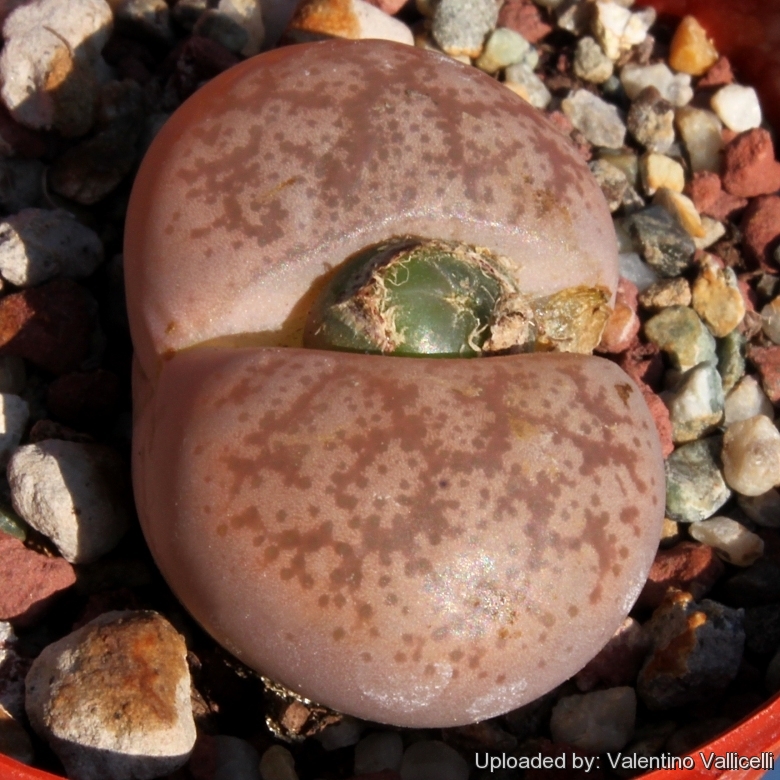 Origin and Habitat: Endemic to Lephalale, Limpopo province, South Africa.
Habitat: It grows wedged among sandstone rubble and rounded alluvial quartzite pebbles on an eroding conglomerate hillock in the Savanna. Soil rather sandy, beige in colour; depth of soil very shallow, as little as 20 mm in someplaces. The only known population is limited to only 400-500 mature individuals occurring at a single location where it is potentially threatened by collecting for the specialist succulent horticultural trade. Background colours light brown to yellowish, also shades of red, brown, pink, opaque white, purplish, stained black, greenish.

Description: Lithops coleorum is tiny species with pale creamy brown bodies suffused with pink or green with distinctive branched markings which make it easy to identify.
Similar species: Somewhat similar to Lithops pseudotruncatella and its allies, but differentiated by its total lack of rubrications and different seed and capsule shape.
Habit: It is an acaulescent perennial, geophytic, succulent, seldom solitary, usually forming clumps of 2, occasionally with up 8 heads.
Bodies (Paired leaves): Small sized, compact, obconic, truncate-cordate in profile, 14-18(-21) mm long, 8-12(-14) mm broad, fissure shallow 3 to 5 mm deep. The lobes are usually unequal. Faces flush or convex and more or less elliptical not translucent and smooth pale pink, grey or greyish-pink, beige or greyish yellow. Shoulders similar to the islands or slightly paler. The margins are not clearly definite and irregularly interrupted by numerous branched intrusions from the channels. The windows are usually not pronounced and often identified as broad to narrow, very irregularly shaped channels and irregularly found more or less crowded on the entire surface including the margins, islands and channels. They are dark green and clearly distinguishable. Channels narrow, semitranslucent, brown with a reddish or rarely greenish cast, usually up to 2,5 mm wide. The islands are small to large opaque areas not sharply definite and irregular. Rubrication absent.
Flowers: Daisy-like, diurnal, small to medium-sized up to 25 mm in diameter (but usually about 20 mm), yellow.
Fruits: Capsules mostly 6-chambered up to 7,5 × 6,5 mm, boat-shaped in profile and the top more or less flat. The end face is elliptic to almost round.
Seeds: Smooth, yellow-brown in colour and with a brown top.

Subspecies, varieties, forms and cultivars of plants belonging to the Lithops coleorum group 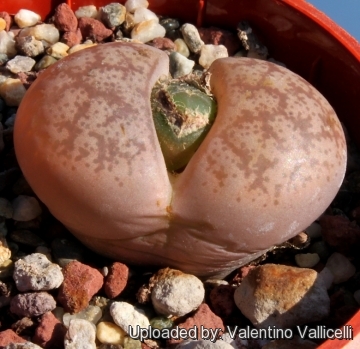 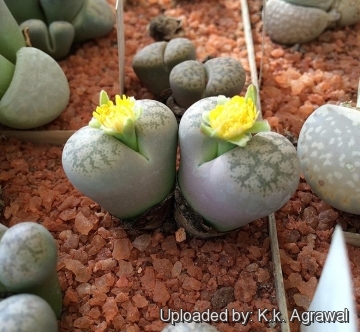 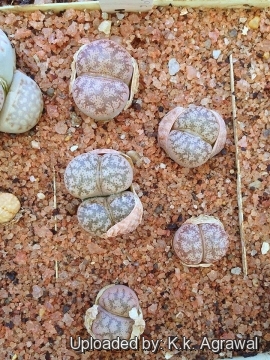 Lithops coleorum Photo by: K.k. Agrawal
Send a photo of this plant.