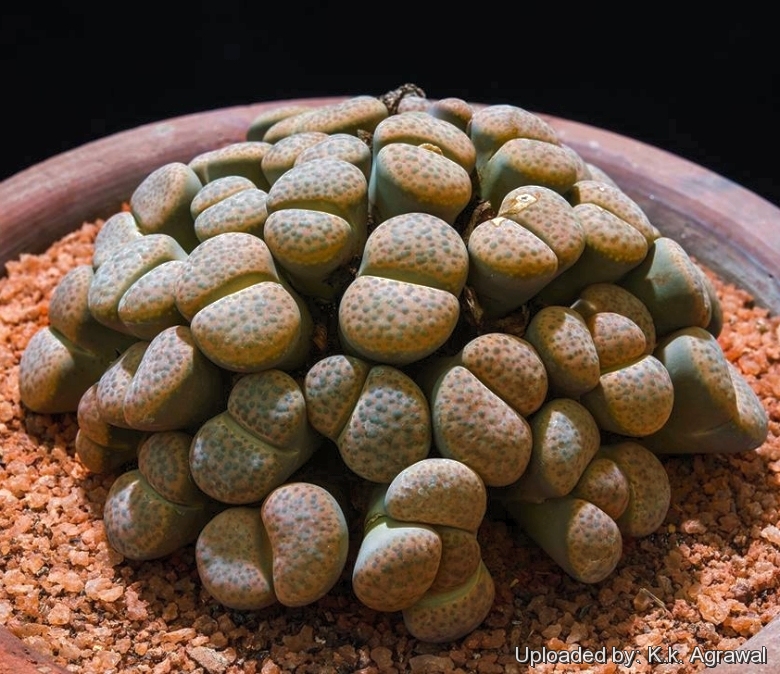 Origin and Habitat: Namibia and Northern Cape, South Africa.
Altitude: 700–1150 metres above sea level.
Habitat: Its natural habitats are rocky areas and cold desert. The stones comprises light to dark brown or reddish-brown, white or greywhite quartzite, gneiss, quartzite and schist, calcrete and quartzite; they are also found on gentle limestone slopes. Known in Namibia from between 11 and 30 sub-populations and locations; no significant continuing decline in number of mature plants known.

Description: Lithops fulviceps is an orange-brown species generally smaller than most Lithops but its shape follows the same pattern of a cordate (heart-shaped), bifurcate body of two leaves.
Bodies (paired leaves): Truncate in profile, cleft nearly to the base. Faces flush, elliptic-reniform, slightly rugose, variable in colour.This species usually do not shows clearly evident margins, windows, channels and islands, but the top of the leaves are more or less reticulated by slightly impressed grooves that sometime form a conspicuous network, the usually very numerous and slightly raised dusky dots like miniature blisters over whole face. The patterns of colour and dots on the face is more or less regular within certain ranges of similarity. For this species, the dusky dots are very specific ranging in colour from dark grey through browns to purple.
Flowers: Yellow, medium sized up to 35 mm wide but usually less.
Fruit: 5-chambered capsules, top flat to slightly convex.
Seeds: Yellowish brown to brown; smooth to rugose.

Subspecies, varieties, forms and cultivars of plants belonging to the Lithops fulviceps group 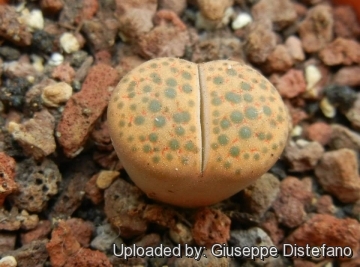 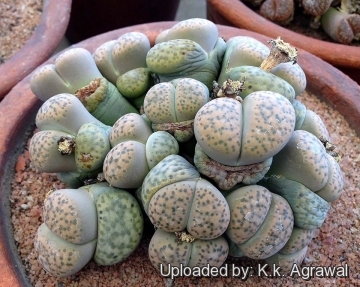 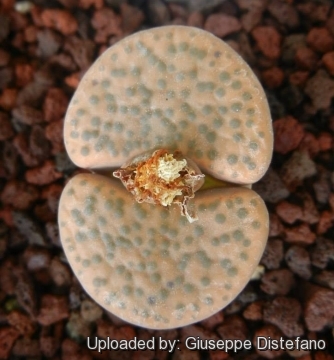 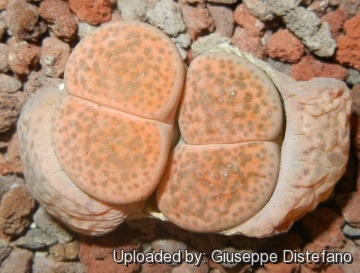 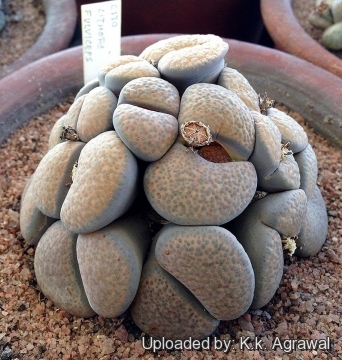 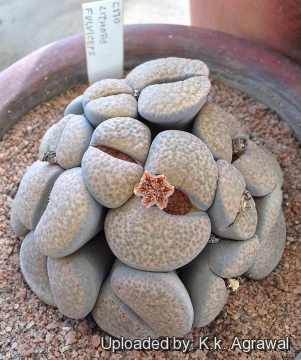 This seed pod opened up when a drop of water was put on it. It too became a flower type exposing the seeds within 1.5 minutes Photo by: K.k. Agrawal 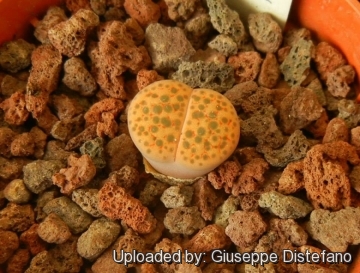 Lithops fulviceps Photo by: Giuseppe Distefano
Send a photo of this plant.

Cultivation and Propagation: Lithops fulviceps needs an open mineral, fast draining mix and the maximum amount of light you are able to give them. The basic cultivation routine is: Stop watering after flowering. Start watering after the old leaves completely dry. (Usually late March or Early April) Water freely during the growing season, soak the compost fully but allow it to dry out between waterings, no water when cold. Some growers fertilize frequently, some hardly ever. Keep them dry during the winter. Nearly all problems occur as a result of overwatering and poor ventilation especially when weather conditions are dull and cool or very humid. This plant is best for a well lit area (Bright shade to full sun). But don't be afraid even the best growers have plants that mysteriously dry up, or leave during the night.
Comment: After flowering in the autumn and extending through winter season the plant doesn’t need watering, but they will still be growing, the new bodies will be increasing in size extracting water from the outer succulent leaves, allowing them to shrivel away. In fact the plant in this time extracts water and nutrient stored in the outer succulent leaves, allowing them to dehydrate relocating the water to the rest of the plant and to the new leaves that form during this period until the old leaves are reduced to nothing more than "thin papery shells".